Before Twilight, vampires were cool. They were edgy and sexy and everyone secretly wanted to be one. Most of my free time recently has been taken up by vampires. Not through the medium of books, film, TV or graphic novels but because of a ten-year-old PC game.

Vampire: The Masquerade – Bloodlines is a computer role playing game. The concept comes from an RPG written by Mark Rein.Hagen and released by White Wolf Publishing. I’ve yet to play this (or any other) version of the game, so I’m just going to focus on the PC one I purchased through Steam.

Steam is amazing; by the way, if you have ever played computer games in your life and haven’t become a Steam user yet, you’re missing out. As mentioned by my fellow pop-versers here and here, Steam is a software distribution platform that has a lot going for it. VTM: Bloodlines and Steam have been in bed together for a while, as it was one of the first games to use Steam parent Valve’s source engine, which went on to be used for such games as Portal , Left 4 Dead and Half Life. Bloodlines has a bit of a cult following, but was plagued by bugs on its initial release. I remember watching my friend play when it first came out and thinking this had the potential to be one of the best games ever. I attempted to download it, but no matter what game patches I applied, I couldn’t get the thing to run and eventually gave up hope. And the company that made it went out of business. Browsing Steam earlier this year, to my delight I discovered the game was available, the community links contained patches that worked (this game owes a lot to an active fan community), and suddenly, there I was being ’embraced’ as a Kindred.

Being a vampire in this game means you’ll belong to one of the main ‘clans’, all of whom have their own special abilities and limitations. The story has everything from the suave sophisticated society types who just happen to be pale and drink blood, to the Schrek-type bat-eared monstrosities who can’t go out and play. Vampire society in this world has its rules, and its rule breakers. The political wheeling and dealing, combined with the rich mythology and the various strata of vampire society keep you on your toes as you explore the game and decide who to trust.

Atmosphere to die for

This game pays attention to the details. The histories and canon from the source material are taken seriously. The world of modern California with a noir vampire twist is absorbing. There was a specially created soundtrack, so the music blaring in the clubs isn’t just pointless background noise. From the death squeaks of the rats you consume in the sewer, to the sultry tone of the prostitute you’re propositioning, this game has sounds and voices down to a fine art. 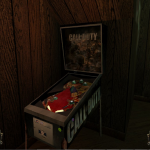 The little quirks I love are things like the graffiti on bathroom walls, the posters outside buildings, the random emails you can read on stranger’s computers if you hack in, or even get spam on your own character’s email account. Then there is the fun aspects, like the Call of Duty pinball machine.

You can turn on a TV or radio, and hear anything from the news to a late night chat show, complete with pathetic callers. The game also doesn’t spoon feed you, if you step into an elevator you actually have to remember to push the right button.

Bloodlines relies on cinematic cut scenes to set the tone and give some context. There is a vast amount of information in this world, but you can repeatedly ask questions about the clans, sects, places and people you meet. And the information on the loading screens is often useful. There are quite a few autosave points, which helps a lot when you’re not able to figure out straightaway how not to die during a quest.

Like any good RPG, there are things you have to do to progress the game, but a lot of leeway in how you develop your character, which faction you align with, and whether you take on side quests. The vampires in this game are devious, double-crossing and often not playing with a full deck. The dialogue options are fantastic, but there is also a realistic side to reactions to your choices. The world isn’t afraid to punish you for being a git, as I discovered on one of my first quests – I was killed by someone who would have been an ally except that I was exceptionally rude to them. And there are parts of dialogue only available if you have a certain skill set (you have to be attractive to use seduction, for example). One of the most fun parts of the game is the adult humour; you can’t have a game set in a modern American city at night (with sexy vampires) without there being a lot in innuendo and sleazy characters to interact with. You can lose your ‘humanity’ in the game, but you can also miss out on a lot of fun if you’re trying to be too ‘good’. The game lets you chose the balance. And while you can get by without having to drink human blood, it’s a lot more fun to stalk victims down dark alleys than to live off sewer rats and blood packs. Killing innocent people however, brings the police on your head, but during a fight anyone’s a fair target, which leads me on to…

As far as gameplay goes, there is a lack of finesse to the combat that may irritate some players. But it suits my ‘flail at it till one of you is dead’ style of melee just fine. (Yes, I button mash in fighting games.) If you’re good with a gun, the game gives a few options for different types and plenty of chances to stumble across extra ammo. The guns are great for dealing with any human villains you encounter, but you can’t beat a good old fashioned knife for dealing with your fellow undead. You can pick up any weapon held by those you kill, or purchase them from shady pawn shops or out of the back of a van. For blunt force I’m particularly fond of the severed arm you can pick up early on, much cooler than a baseball bat. Certain vampire types can also use blood magic (thaumaturgy), so if you prefer magic for your fighting, that’s an option too. My favourite way to kill people in battle is to completely drain their blood, as that has the added bonus of speeding up your healing. Certain types of damage will kill you quicker (Vampires + Fire = Bad!), and running out of health will cause ‘final death’ which means you’ll have to reload and hope your last save wasn’t too long ago. It’s a process I’m intimately familiar with by now, but then again, I did point out my lack of combat skills! 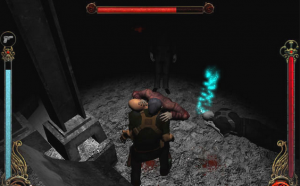 Ok, even with the patch the game is still a little buggy in places. But the characters, the atmosphere, the intrigue and the quests more than make up for any minor issues. I’d recommend this game to anyone who’s a fan of vampires, or of RPGs, and especially people who like both. If you’re out of practice with playing computer games, don’t fear, the ease of the controls and the ‘training’ at the start will get you right back in the zone.

I’m yet to complete the game as my current character, but already I’m looking forward to finishing it up and then doing it all again. Maybe I’ll pick a different vampire clan. Maybe I’ll align myself to a different powerful vampire or group. Maybe I’ll try to be more belligerent, or see what happens if I deliberately fail at quests. This game has the ability to excite me, intrigue me, scare me, and keep me guessing. I have a feeling that playing it again will be every bit as fun as the first time around. But more importantly, it made me remember how cool vampires are, how much I wanted to be one, and how much fun an immersive game can be.

Of course, there are plenty of cool, entertaining, power-hungry, smack talking, ass kicking vampires still around in popular culture. Like those in Terry Pratchett’s Discworld. See, of course I managed to fit in a shameless plug! Pratchett fans come and play.