Home / Comment / How to turn an average gathering into a memorable event: Theme it! 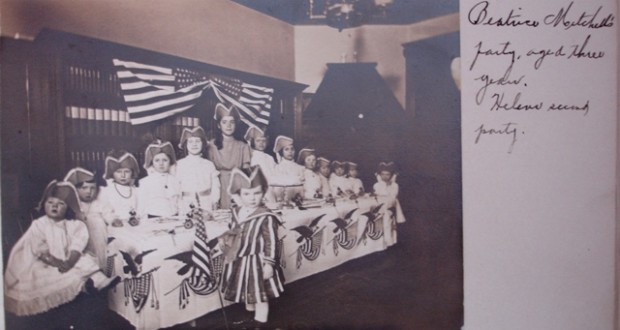 When organising an event, a lot of the large and small issues encountered can be solved by settling early on a theme. I’ll be looking at the benefits for both the host and the attendees. For all events the issues of decoration/advertising, dress code and activities can all be helped by deciding ahead of time what the theme is going to be. For larger events, most of my experience comes from social occasions for fans, but the lessons from these conventions easily carry over for conferences, symposiums and other social, professional or academic gatherings. Adding a theme for large or small social occasions can turn an enjoyable but dull time into something unforgettable. 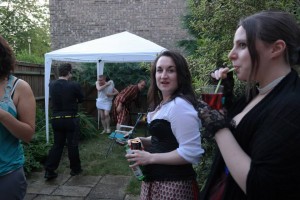 Whether you’re hosting a party for groups of friends or an event attended by hundreds of strangers, the theme is a unifying factor. I’m not a party animal, but I do enjoy letting my hair down from time to time with friends.  What I have found is that the older I get, the less occasions there are for hosting a party rather than just a night out. There comes a point where having a big bash for a birthday that isn’t in 5 year increments seems self-indulgent (why are you having a big bash for 27? Surely the next one after 25 is 30…). I don’t have the same relaxed attitude I had in my student days: ‘Hey, there are more than 10 people in the house, I declare this a party, somebody come with me to get some cheap beer!’ 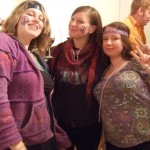 Having a party not on Hallowe’en that you just declare to be ‘costume’ often means that only people who really enjoy getting into costume will make an effort or show up at all. The solution to get people enthusiastic about a party can often be to theme it. However, some people like to take a theme to the extreme, which is equally off putting. A good balance is to find something most people can relate to, even if it’s not something they are particularly knowledgeable or passionate about.

I’m lucky to know lots of creative and fun loving people, so there are plenty of themed parties that come to mind. Some examples: Rap/Eminem, Rainbow, Olympics, the London Tube, Tiny Food, Time Travel, Harry Potter, Hippy, Russian, J, Make Your Own Cocktails, Glee, Bad Taste, Disney, Murder Mystery, Childhood Characters, Stereotypes, Heroes and Villains, Eurovision. (Apologies to anyone whose creative themed event I have attended but left out.) Some were going away parties, some birthdays, others were around special occasions but not focussed on them, some were just because a party was overdue. 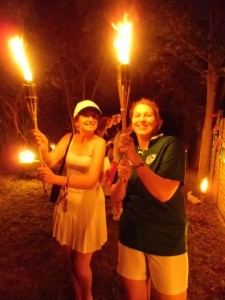 Having a theme makes it easier for the person planning a party – decorations, type of food or drink can all be tied into it. It can be as simple or complicated as you like (the Harry Potter party served butterbeer and lemon sherbets, and sorted guests into houses, Tiny food’s only requirement was that you bring miniature food). Costumes, if suggested, can be as elaborate or simple as the guests like. Your friends shouldn’t have to have in-depth knowledge of or be into the theme to take part ( quote from a party goer: ‘Went to a Game of Thrones party, haven’t watched it but I figured my Viking costume would do’). If you want to have a party about something you love, but are worried about other people not taking part, you can look at broadening the theme. My friend likes costume parties, and his name begins with J, so one birthday was a ‘J’ themed event. Which meant the diversity of costumes was amazing, and gave everyone a starting point of thinking of a costume they could manage that involved a J. We had John Travolta partying with jockeys, Jedis, Jessica Rabbit and a Jackson Pollock painting. While any party on its own can be fun, themed parties can give the event that extra sense of occasion and help people out of their shells.

The theme is an important thing to decide early on when organising a larger event. Professional conferences will often have a specific topic or message to focus on. The largest themed events I’ve been to are of a more casual nature – the International (UK based) and Irish Discworld Conventions. The Conventions follow a fairly standard format where there will be an opening event, a closing event, and lots of fun stuff in between, including interviews, games, panels and a big posh dinner (if you want to know more, I recommend looking at www.dwcon.org and www.idwcon.org). Once you have a theme, it starts inspiring the type of games/panels/programme items you organise. It doesn’t limit what you can do, as not everything needs to be related to the theme, but it sparks your imagination about what you could do, and can tie different events together.

For example, for the 2010 UK Convention The Theme of the Thing was around the Discworld novel The Fifth Elephant – about dwarves, politics in Überwald and the crowning of a new Low King (among other things). That meant that during the event, we held ‘elections’, people ran around ‘campaigning’ and the posh dinner was connected to the coronation ceremony. It added an extra layer of fun. We’d have been happy just going to the Convention, seeing some interviews and chatting around Discworld as a whole, which we did. But we also took part in the Crowning of the Low King – and that helped make the weekend even more special. This year, since the railway has come to Ankh Morpork, they’ve gone Steampunk, which is a whole new avenue for some fans, and a long-awaited opportunity for others. 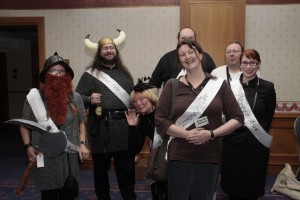 The most recent Irish Convention took a real world event and mixed it with Discworld for the theme. Ireland’s tourist board was encouraging people to come home from abroad, and calling 2013 the year of ‘The Gathering’. It was a good campaign; the Convention organisers tied it in with the area of Discworld famed for exporting Wizards, Lancre. The Lancre Gathering was great fun, it combined the real world message of ‘come to Ireland’ with Lancre and its witches and feudal nature. It made for a fantastic Convention.

For 2015, the Irish Con theme (only recently officially announced on www.idwcon.org) is the Watch. For anyone who is a Discworld fan, and especially a fan of Sam Vimes and company, this is immediate cause for excitement. And joy. And makes life on the planning side easier, because I have a committee full of creative and dedicated people who have a focus through which to channel their energies. The Watch brings the possibilities of police induction, training: of dragons and people in armour, of Clint Eastwood-esque puns and all sorts of things. For the people who aren’t much into themes, it’ll still be a weekend of general Pratchett related revelry. We’re conscious of keeping the balance between ‘this is an amazing theme, what else can we do with it?’ and ‘this is an amazing Convention overall and we want to encourage both the fanatics and the casual fans’. 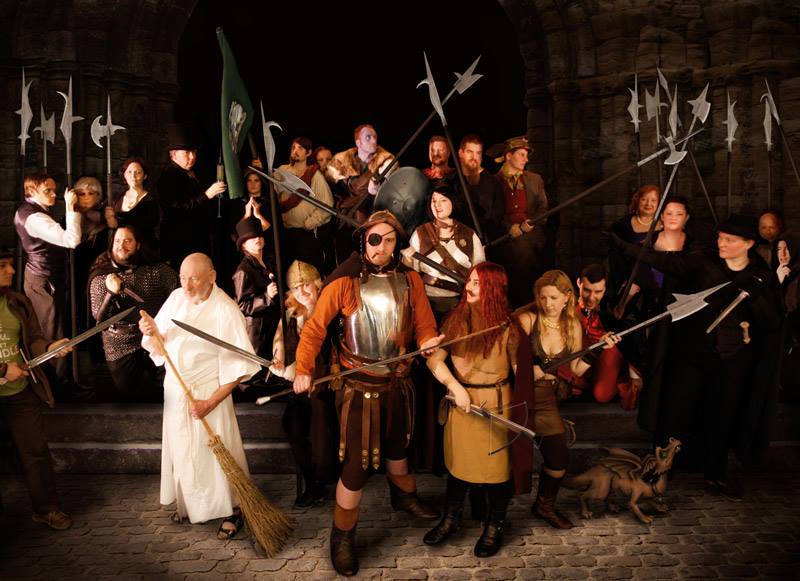 Photograph by Robert Flach, improvements and dragon by Amber Grundy

So my advice to you if you’re planning an event, large or small, personal or professional, is to theme it. It can be something as simple and broad as a colour scheme, or something as specific as a film or book. The best advice is take something you, as the organiser, adore, and see if you can broaden it to the point that even friends who aren’t fans can get something out of it. After all, these parties and events are just an excuse for people to have face time with other people, and the theme should be something to aid that, not hinder it. Make your gathering something special!

Previous: New standalone Star Wars film announced
Next: X-Men: Days of Future Past – There is a new enemy out there: mutants.