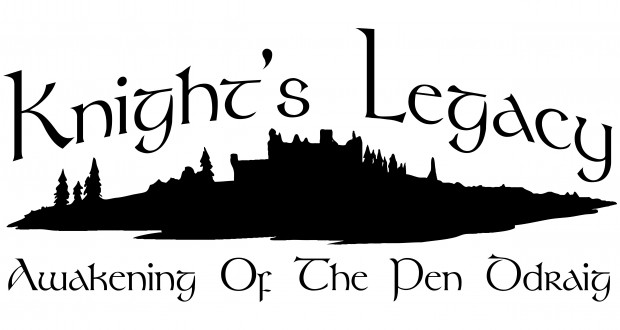 Michael Sacal recently spoke to Pop Verse about his latest comic book project, Knight’s Legacy: Awakening of The Pen Ddraig, for which he has turned to crowd-funding to produce.

Michael is the President and founder of Heroic Tendencies Studios and the Creative Director of the Majestic Universe, of which Knight’s Legacy is the flagship title. His work has appeared in Faster Than Light from Orang Utan Comics, and Sky Watcher, The Leaf, and Red Leaf Comics Presents from Red Leaf Comics. Follow Michael on Twitter @HeroicTStudios. 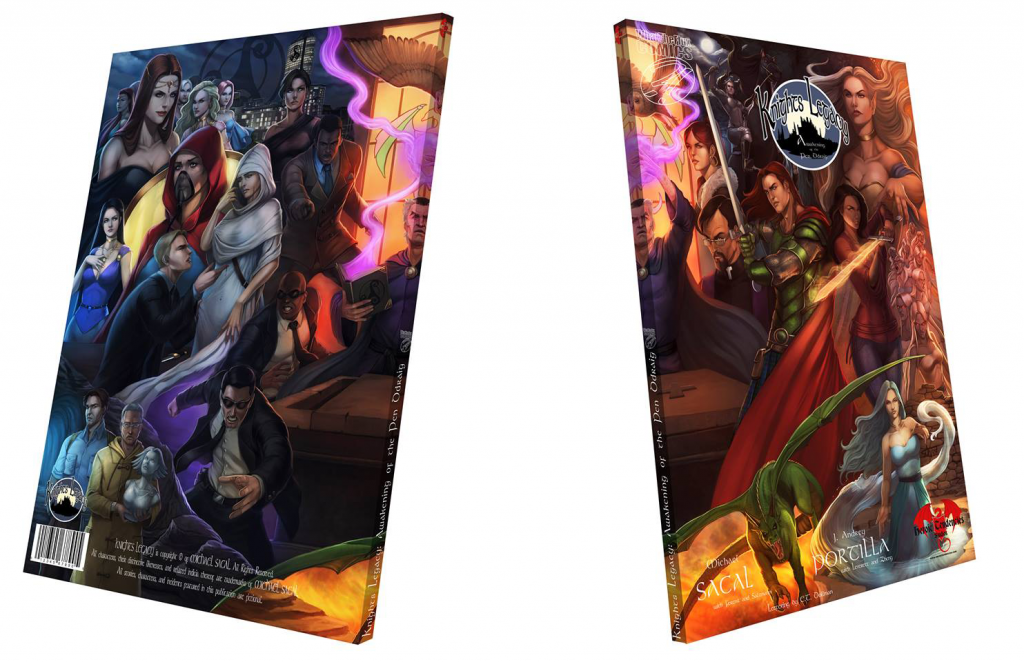 What draws you to the comic book/graphic novel form of storytelling?

What appeals to me is the synergy between an artist’s illustrations and a writer’s words.

What comic books have most inspired you in your writing?

All comics that treat the material seriously like Watchmen, Astro City, VALIANT, etc, etc. Those help me with the tone. 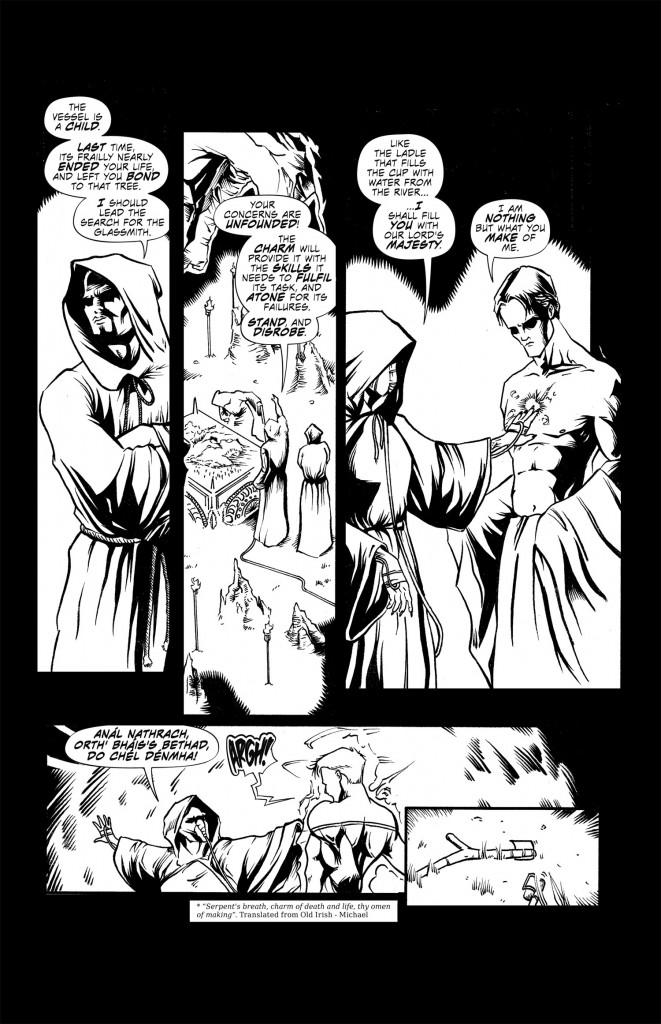 I do basic page layouts (mostly as suggestions, not strict guidelines), and provide all the reference material I can find to best help the artist visualize my ideas. At the same time, I try to give the artist as much leeway as possible.

Why do you think that Arthurian legends and tales of Chivalry are still relevant to today’s audiences?

Because they’re timeless — it is only their form that changes. A story doesn’t need dragons, knights, and damsels to be an Arthurian story, merely a hero, a villain, and a person in need. The ideals mutate into different forms (i.e. aesthetics) but the ideas remain the same. Batman, for instance, is The Dark Knight, while the Joker is the dragon he must slay.

Where did the idea for Knight’s Legacy: Awakening of The Pen Ddraig come from?

I’ve always been interested in the Arthurian legend, ever since I saw the movies The Sword in The Stone and Excalibur, so when I decided to create the concept that would become Knight’s Legacy I turned to that for inspiration. The goal was to create a superhero story that went against the norm of what one finds in those comics. I wanted to tell stories about people that find themselves in extraordinary situations that force them to find the heroes within. Learning that you’re the modern descendant of King Arthur seemed like an extraordinary situation to me, and I still think it is.

What is it about the story of Pen Ddraig that means it needs to be told?

Knight’s Legacy is the first series in the Majestic Universe, a shared fantasy/science fiction universe that tells a vastly-ambitious, yet consistent saga told across seven interrelated series that tell a unique story with a beginning, middle, and an end. The stories set here put a larger emphasis on character than on high concept (or in other words, they are character-driven as opposed to plot-driven — or even media-driven), which makes the Majestic Universe unlike many other shared universe in comics. The success of Knight’s Legacy will herald the release of the Majestic Universe, giving the members of the audience that seek an alternative to reading plot and media-driven comics what they look for. 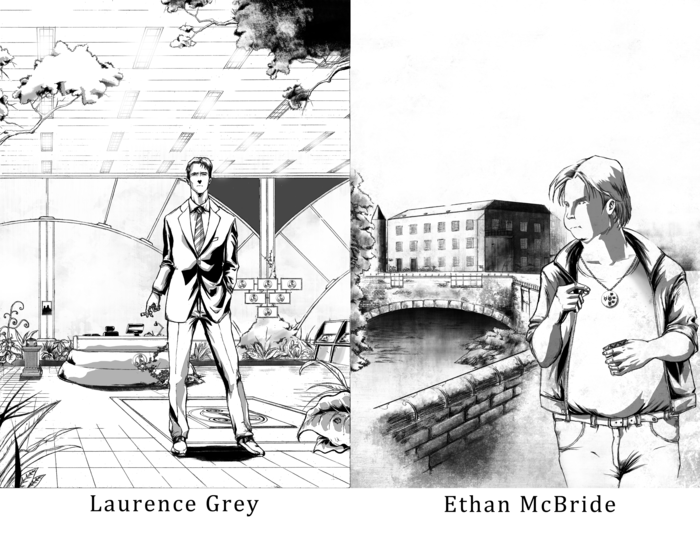 Tell us a bit about your main characters and what makes them tick.

Laurence Grey is a soulless man whose lack of self makes him indifferent to the suffering his tyranny causes the people of the European Union. Ethan McBride is a selfish man whose determination to find the place where he comes from compels him to only take action expecting a reward for his efforts.

Why do you think fantastical tales involving magic and mystery have such enduring popularity? How will Pen Ddraig fit in with the fantasy genre?

Authors always find ways to innovate and reinvent them for new generations, which keeps them from becoming stale.

Knight’s Legacy: Awakening of The Pen Ddraig is a comprehensive Arthurian saga deeply rooted in the fantasy genre that gives previously accepted facts about Arthurian lore a new interpretation, which allows it to stand on its own merits alongside other tales inspired by the same source material. Everything everyone knows about the lore is open to reinterpretation, from Merlin’s role in Arthur’s birth, training, and coronation, to discerning who the heroes and villains in classic Arthurian tales really were. 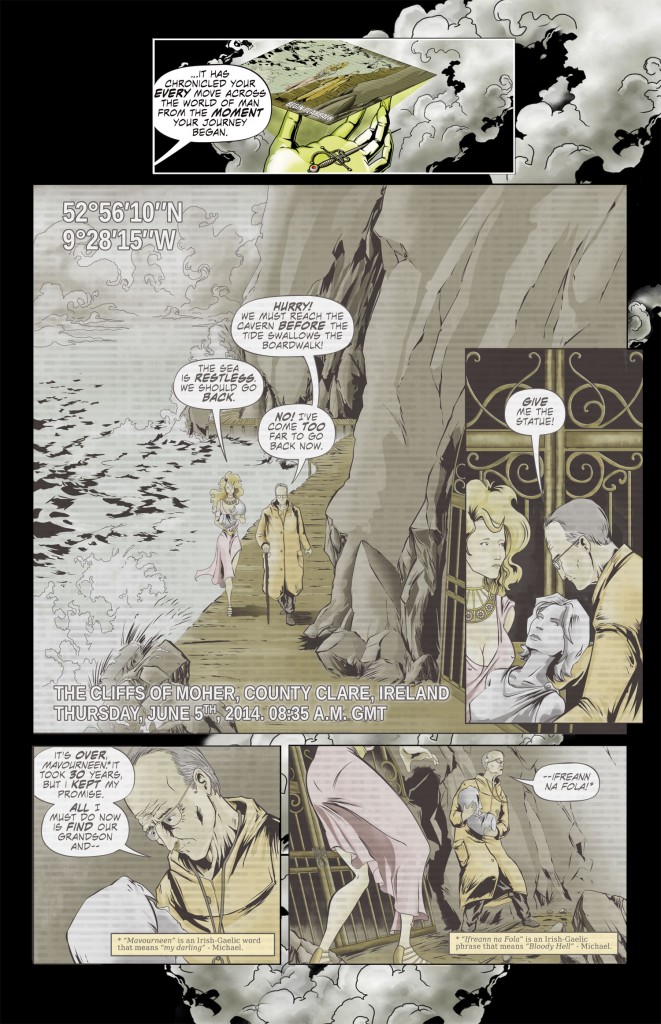 Why are you turning to Kickstarter to fund this project and what will the money raised be used for?

Finding publishers that can finance the production of a project like this one has been impossible for me. I’ve turned to crowdfunding hoping the audience might be able to help me fulfill a goal I’m been working on for 16 years now. The money will pay the penciller, the inker, the letterer, the colorist, the printer, the rewards, and all fees associated with the Kickstarter itself.

Who else is involved with this project?

John Andrey Portilla, the penciller, is a Colombian comic book artist. His first work appeared in Delirium, a comic published in his home country. In an effort to project the national narrative graphics, he has worked as an illustrator designing characters and developing illustrated children’s material for Colombian publishers. His work also includes the Dragon Tamers comic book from Bronco Ink Publishing.

Andrey was one of 12 Colombian authors displayed at the 2012 Fumetto International Comix in Lucerne, Switzerland with his Supinauta underground comic book strip. He is currently working for MTG, a publisher in Spain, on a soon-to-be-released comic book about demons and vampires. His contact email is andreyportillaart@gmail.com

Kevin Leverett, the inker, is an inker/illustrator from Dallas. He has been working in the comic field for about three years. His work appears in books such as Death Fox from What The Flux Comics and Son Chasers from Pilot Press. Kevin has also contributed to various other anthologies. He is a member of Cornerstone Creative Studios. His contact email is kevin@cornerstonecreativestudios.com.

Roberto Torres, the colorist, is a freelance illustrator. He’s worked for several indie comic publishers in Florida, like Con Artist Entertainment in Zombie Squad and various inking and coloring jobs, like the cover for Project: Overwatch) and Creature Entertainment in Bubba The Redneck Werewolf as artist/inker.

E.T. Dollman, the letterer, is an alien letterer and writer. He has lettered comics published by Image Comics, AC Comics, Markosia, and written stories for Heavy Metal Magazine, Zuda, and Femforce. His email is e.t.dollman@gmail.com, and you can find him on Facebook. He likes humans.

Art Gutierrez, the cover artist, is a digital artist and designer from Mexico city. He has a background in architecture having majored at it before realizing his real calling. He has worked on several projects as a freelance concept artist and illustrator and he’s currently working on a comic book project called Team Genesis as the lead concept artist. The genres he likes to work in the most are science fiction and fantasy. Find him on DeviantArt artgutierrez.deviantart.com and Facebook www.facebook.com/ArtGutArt, or contact him at art@farcornersstudios.com.

The Adventures of Jonnie Rocket: An interview with creator, John Chapman