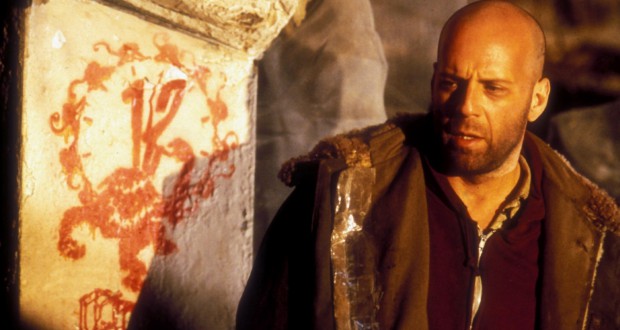 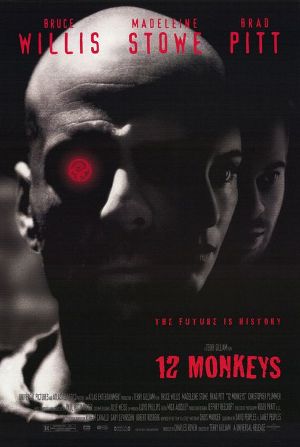 Terry Gilliam has a gift for creating visually stunning yet disturbing films. Among them is cult favourite science fiction thriller Twelve Monkeys (1995). Based on a 1962 French short film, La Jetée, it is now being completely ‘reimagined’ as a television series by Syfy (the channel that brought us Battlestar Galactica and Eureka). The new series debuts on January 16th, 2014.

The film covers many complex ideas, not shying away from tricky concepts like time travel, determinism, as well as asking questions about the nature of reality and how the mind processes its stimuli. There is also a more peripheral debate about right and wrong, and whether humanity deserves the ‘cull’ that is coming to them. What is particularly refreshing about Twelve Monkeys look at time travel is the deterministic approach it takes. To them, the future is happening the way it already has – precisely because it already has happened – the time travellers they send backwards are not there to change the future, only to observe and learn from the past. 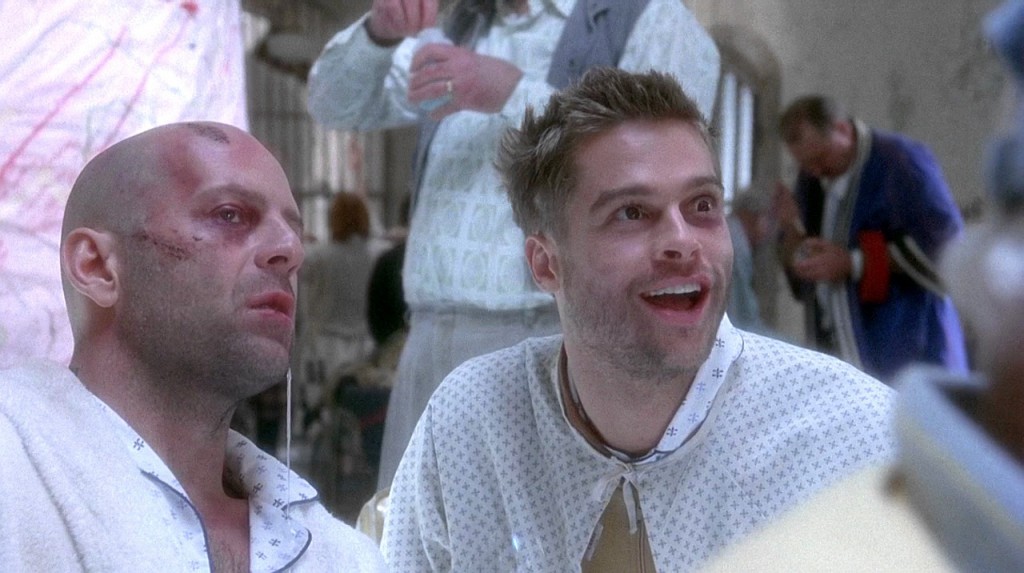 In the year 2035, humanity is forced to live underground, as the surface is infested with a deadly virus that killed over 5 million people from 1996-1997. James Cole (Bruce Willis) is a prisoner, forced to take part in an experimental programme to gather information on how the virus came to be.

He is sent back in time to 1990 where he is captured and sent to a mental institution after claiming he has come from the future. Cole finds a sympathetic ear in his psychiatrist, Kathryn Railly (Madeleine Stowe), and befriends a fellow inmate, Jeffrey Goines (Brad Pitt).

The pieces slowly begin to fit together as he is sent back in time again, this time to 1996. Cole attempts to track down the Army of the Twelve Monkeys, led by Goines, with kidnapped Railly along for the ride. But as Cole gets closer to finding the truth, his mind beings to unravel – unsure of what is real anymore, he wonders if he really is crazy. 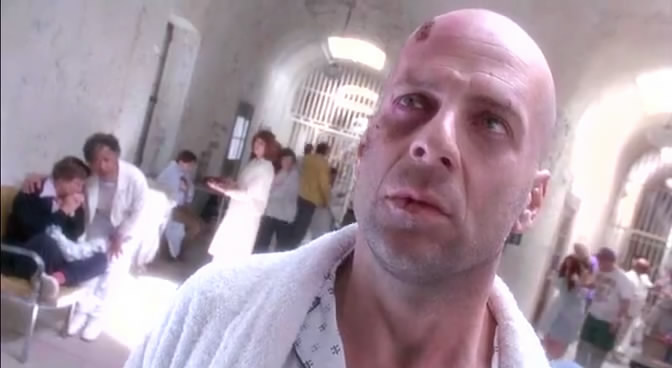 While the film is presented like an accurate view of the story, it is still possible that the entire thing is an elaborate construction of a disturbed mind. The possibility of this is brought up throughout. For instance, Cole meets a man who is ‘divergent’ – believing himself to be two separate entities at once. As Cole moves through time more and more, it takes a toll on his mind, with each time slip he becomes more confused about what is real. In a scramble to make sense of his unreal situation, his mind tries to cope by convincing himself that he is actually mad after all.

Railly opens the 1996 section of the film at a launch party for her publication that discusses the Cassandra Complex. Where someone is gifted with visions of the future but suffers with them as no one ever believes her. This is very much the situation for Cole. He is unable to easily gather information as no one believes he is there to complete a scientific mission. It is no wonder that the events of the film drive Cole to madness.

All of these occurrences are there to question the fabric of the mind, asking us how much the human mind can really take. If it was possible for us to time travel, could we even handle it?

‘I want the future to be unknown.’ 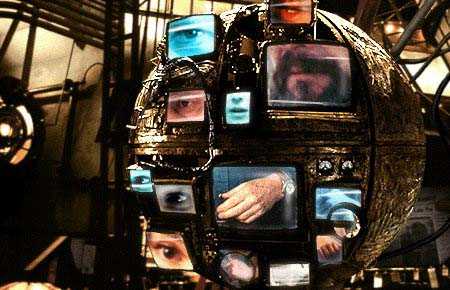 Most time travel films involve people travelling back in time to alter the future (for instance, Terminator, Back to the Future, X-Men: Days of Future Past). In Twelve Monkeys however, that’s not the case. From the beginning Cole is told that he cannot change what has happened – there is no way he can stop 5 million people from being wiped out. It has already happened and therefore will happen. All he can do is to go back and learn as much as possible about the virus so that they might find a cure for it in the future, allowing humanity to repopulate the surface of the earth.

It is an interesting take on the time travel issue. While it has the potential to take the threat out of the story, the film shows us that it is in human nature to feel that they can always change their future. We naturally believe that our future is yet to be determined, so the audience is also pulled along with this point of hope despite being assured at every turn it is impossible. The further along in the film we get, the more we hope that the scientists are wrong, that the future can be changed.

The performances in the film are stellar. Along with the incredible visual design and beautiful cinematography, the strong acting from the leads is what helps it remain a science fiction classic. 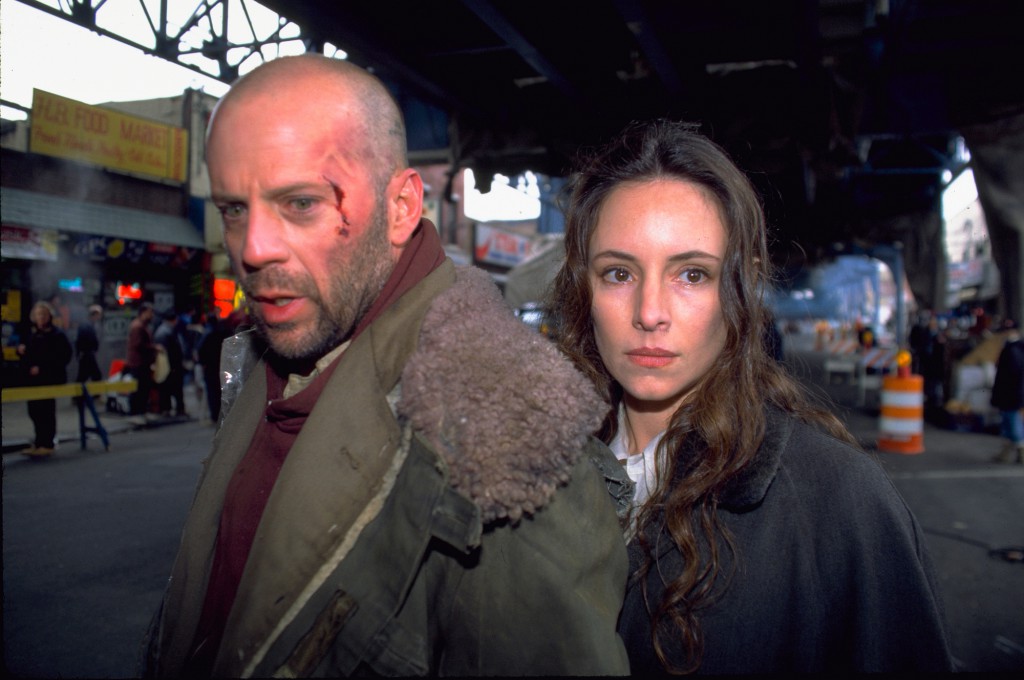 Bruce Willis should be in all science fiction films. Some of the greatest scifi films of our time have included Mr Willis: Twelve Monkeys, The Fifth Element, and Looper. It is strange to me that he isn’t regarded in higher esteem for his acting chops given his excellent performances in these films. He is both strong and vulnerable; while he is prone to violence and has a hot temper, he still manages to come across as ‘normal’ given his life circumstances. When he is rediscovering the beauty of earth on the surface, through music, fresh air, and light, his joy is childlike and endearing.

But it is probably Brad Pitt who is most surprising and effective in his role as the insane Jeffrey Goines. The energy of his performance is frenetic, leaving the viewer unsure of what mental space he will be in from moment to moment, exactly as it should, given his unstable state of mind. Supposedly, Pitt spent several weeks at a mental institution studying the patients as preparation for his role, and his proximity to the subject shows in his disturbing and thorough portrayal of a psychiatric patient.

It is difficult to see how the film will be made into a series, especially given the red herrings around the Army of the Twelve Monkeys. Also, while the threat and tension level manages to hold up within the span of a film, I’m not sure it could for a series – unless they drop the deterministic aspect of the time travel (but then it will lose much of its charm). Syfy has stated that the series is definitely a reimagining rather than a remake, so perhaps the show we will get will be nothing like the film on which is was based.

Whether or not you watch the new series, if you’ve not seen Terry Gilliam’s film, it is definitely worth catching up on.

Previous: Agent Carter: I don’t require your assistance
Next: Tips for successful editing