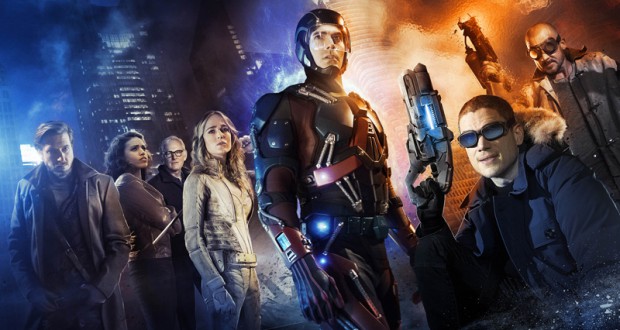 If you thought we’d reached a natural saturation point for superheroes on TV, think again. CW has just released the first look trailer for its newest DC series, an Arrow and The Flash spin-off, entitled Legends of Tomorrow. Unlike its predecessors, Legends of Tomorrow will attempt to have a more global focus, rather than being limited to either Starling or Central City.

The collection of characters is certainly odd, something addressed heavily in the trailer. Will it work? Who knows. It’s certainly interesting to see how traditional heroes, antiheroes, and straight up bad guys might work together. Unfortunately, for me anyway, it looks like it is going to have a more Arrow-style ‘I take myself very seriously’ vibe to it than the tongue-in-cheek, self-aware fun of The Flash. The trailer certainly doesn’t do anything for me (especially when Rip Hunter makes his appearance as a poor man’s Doctor Who with a Constantine attitude and swagger).

The show’s official synopsis is as follows:

When heroes alone are not enough… the world needs legends. Having seen the future, one he will desperately try to prevent from happening, time-traveling rogue Rip Hunter is tasked with assembling a disparate group of both heroes and villains to confront an unstoppable threat — one in which not only is the planet at stake, but all of time itself. Can this ragtag team defeat an immortal threat unlike anything they have ever known?

A behind the scenes featurette has also been released with commentary from the show’s executive producer Mark Guggenheim.

Previous: First look at Supergirl released
Next: Cibopaths and saboscrivners: The tasty flavours of Chew