Home / Film / Victoria: One girl. One city. One night. One take. 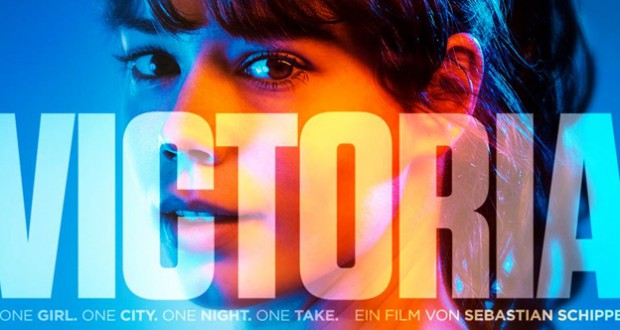 Victoria is the latest European indie film to have critics raving. It has the added bonus of an intriguing – aka gimmicky – production: the entire film takes place in one shot. If nothing else, you have to admire an achievement like that. While the film is at times moving, intense, and exceptionally well blocked (really, one take! And it sprawls all over Berlin!), the film suffers from the two-part syndrome I see time and time again in European films.

Falling into two distinct halves is one thing, but when the second half fails to live up to the first half and you find yourself wondering why you’re still sat in the cinema, it’s not a good sign. For Victoria, not only would the turning point in the film provide a nice kind of symmetry (opening and closing the film in the same place), it brings on a rather major tonal shift. If it had finished there, I might have told you that Victoria was one of the best romantic comedies I’d seen in a long time. Instead, the film overstays its welcome as it turns into an intense thriller.

The film follows Victoria (Laia Costa), a young Spanish woman on a working holiday in Berlin, on a night out. As she leaves the club, she meets a group of German men. They are charming, entertaining, and good for a laugh – but they are also criminals, criminals who are about to get in way over their heads. Boxer (Franz Rogowski) benefitted from the ‘protection’ of a local gangster during a recent stint in prison and tonight the gangster calls in what he’s owed. Victoria’s love interest Sonne (Frederick Lau) convinces Victoria to help them out. And that, they say, is history.

There’s no doubt that the skill involved in creating this film is extraordinary: not only are the logistics of the production incredible, the acting is superb. Costa is compelling as the lead and narrative thread, while the intensity delivered by her male co-stars is tremendous. Unfortunately, no matter how skilled everyone involved is, they can’t make a flimsy story pad out 138 minutes of screen time without making the audience antsy.

I didn’t actually have an issue with Victoria agreeing to help the men. She is portrayed as impulsive and eager for an adventure, and Sonne certainly has his charms. I did, however, wonder at the set-up for the heist. If a gangster really did want to break into a large bank for a quick pay cheque, I would have thought that a) he would be interested in a bigger haul than 50,000 euros and b) more planning would go into it than a five minute briefing and having drunk (and high) thugs carry it out immediately. What I did take away from the film was that prison life appears to be a catch 22. You never really get clear of your past.

What I love about successful indie films is their unconventional approach to otherwise conventional stories. And the first half of Victoria is a rousing success if looked at in this way. A young girl trying to find her way in the world meets a young man, and over the course of an evening of drink, drugs, and crime, they fall in love. Certainly not the typical Hollywood love story – and Costa and Lau have great chemistry. But when the film shifts gears, the action/thriller aspect of the post-heist is so ordinary it could have been from any other heist thriller.

Verdict: Impressive logistics went into the making of Victoria, but no amount of talent – and there’s plenty of talent in the cast – can make up for a disjointed and disappointing narrative.

Victoria is currently in cinemas and available on demand.

Previous: Ready Player One: Going outside is highly overrated
Next: The Machinery: The world is a hard and cruel place