Home / Film / The Founder: McDonald’s could be the new American church 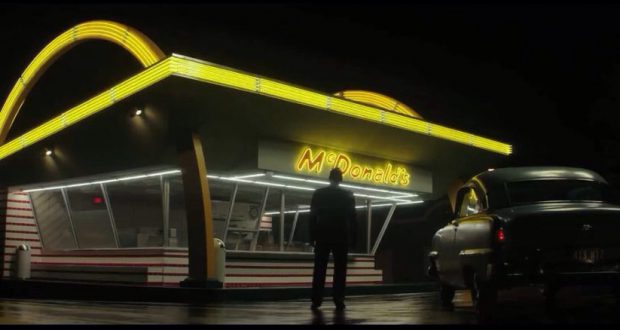 The Founder: McDonald’s could be the new American church

Just about anyone with a modicum of public influence will have a biopic made about them these days. This is a blessing and curse. It can be interesting and informative to get a view into slightly more obscure fields. The danger is that the production will frame tawdry personal drama as the interesting subject matter rather than the particular endeavour that afforded the individual fame. In The Founder, we have a biopic of Ray Kroc who forged McDonald’s into a huge fast food empire. The film is most interesting, believe it or not, when it is tackling the economics and logistics of the restaurant and franchising industry in the 1950s. I just wish it had stayed focussed.

Michael Keaton’s career renaissance since Birdman a few years ago now sees him scoring meaty roles like this one. The film screams ‘awards-bait’ because it features a performance-led narrative for Keaton to revel in and the subject matter is clearly pitched at a certain kind of indignation. That the story is about a manipulative hustler who exploits the work of others and comes to run a gigantic corporation speaks to a disempowered vitriol that most of the audience can be expected to buy into. In other words, much like The Big Short, The Founder longs to have a relevant view on the economy. 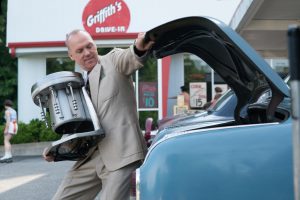 Keaton does deserve praise for his performance. I have no knowledge of Kroc and can say little of how good an impression Keaton gives, but he captures a sense of entitlement and longing for recognition in the man, and crucially shows how a devious manipulator can come across as charismatic. I think the best roles got to Nick Offerman and John Carroll Lynch though as the original brother McDonald who Kroc latches onto. Their endeavours to make an honest buck with quality standards and scepticism for commercialising their brand are obviously a source of humour given what McDonald’s would become, but they are also the source for the canny revolution in the restaurant industry. One of the best scenes is the one where Dick (Offerman) conducts his staff as they implement his newly developed speedy service system in an imaginary kitchen drawn onto a tennis court.

Gems like this, where it makes a nominally dull topic like running a restaurant entertaining, are the highlight of the film. I’m also rather fond of devious corporate dramas so Kroc’s efforts to turn McDonald’s into a land empire where also appreciated. The problem is that the decision to make this a one-man’s-quest story skews its focus away from this material. Instead we get regrettably tokenistic roles of Laura Dern and Linda Cardellini as the women in Kroc’s life and an assumption that a decent amount of material on his home life is of equal interest. It is the typical contrast between a great documentary and a mediocre fiction about the same subject: the former can really get its teeth into its subject; the latter becomes hamstrung by narrative convention. I wanted to know more about the juggernaut that McDonald’s became. 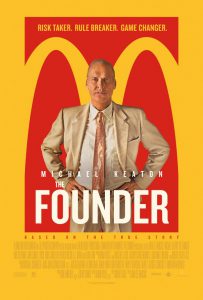 Whilst the film is critical of Kroc and makes plenty of jokes that foreshadow and ironise hallmark features of the McDonald’s experience, there’s also a sense in which it pulls its punches. The Founder is a safe venture that might poke a little fun at the company, but this is no Supersize Me and you could well imagine the company isn’t too sorry for a bit of ever-so-slightly ambiguous publicity. The film is also only critical of Kroc in the same way Scarface is critical of Tony Montana: you’re not meant to leave the cinema wanting to sell drugs or steal a family business, but you are meant to on some level admire the gumption and ambition of the protagonist. Not often I say this, but the film could have done with being a lot more judgemental. As it is, The Founder never really seems to commit to any interpretation.

There’s merit here. The Founder boast some good performances in key roles, flirts with some interesting subjects and has some panache in its humour and delivery. However, it consistently flounders when it gets bogged down in lame personal drama. Worst of all, the flitting between approval and condemnation of Kroc might have been intended for nuance but in the end comes across as indecisive.

Verdict: By no means bad, The Founder fails to reach its full potential.

Previous: Hidden Figures: Here at NASA we all pee the same colour
Next: The Djinn Falls in Love & Other Stories