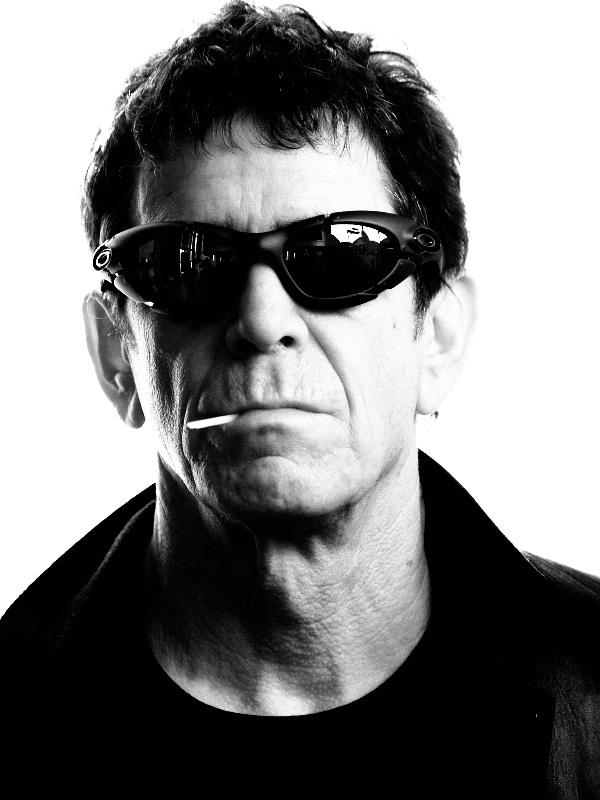 Lou Reed. If I had to sum up what music I like in two words. The thundering art noise; the knowingly camp delivery of poetry; the rich and simple heart of rock n’ roll. The erudite fuck you New York attitude. Get stabbed on the subway on the way home from a Philip Glass symphony. Lou Reed.

Great albums across five decades. The man behind Metal Machine Music’s hour of feedback. The rock and roll animal of Transformer. The focal point of arguably the greatest debut album of all time, The Velvet Underground & Nico. But that was 45 years ago. The walk on the wild side was 40. Even latter career highlights like New York and Magic And Loss are over twenty years ago now. He hasn’t put out a ‘straight’ studio album since Ecstasy back in 2000.

Ageing rockers still sticking out albums. Comfortable retreads of diminishing returns. Flaccid excuses to trot out another extortionate tour of ‘the hits’. Last month, Lou Reed successfully underwent a liver transplant in Cleveland (I won’t speculate as to whether the Rock & Roll Hall Of Fame arranged it) but I sense that many of you aren’t as excited about this as I am. Great, Lou’s still alive, but what, you might ask in the fashion of Eddie Murphy, has he done for me lately?
Well, I’ll tell you.

The Raven (2003)
It wasn’t Ecstasy that put Lou off making standard studio albums. It was The Raven. (And it’s reception.) A sprawling collection of material drawing from the works of Edgar Allan Poe, it’s available in a single disc but you want the full double disc affair, including readings of Poe’s work, which can be cut down to a single album that revels in the wrought & squalid gothic filth of Poe’s fevered psychological scenarios.
It’s a scrapbook of various pieces that touches on Lou’s various styles across the years. Free jazz legend Ornette Coleman’s skyscraping alto sax is here. ‘Perfect Day’ is rolled out again, this time with then-breaking Antony Hegarty. A spritely, pre-hiatus Bowie even reunites with Lou on ‘Hop Frog’. Metal Machine’s relentless noise is resurrected with the bigger, badder, ear-scouring wrath of ‘Fire Music’, and counterpointed by one of Lou’s most nakedly vulnerable ballads in ‘Vanishing Act’. The crown though is the remarkable, reverb-drenched readings of ‘The Conqueror Worm’ and ‘The Raven’ by Willem Defoe.

Lulu (2011)
Yes, the double album collaboration with Metallica. The album that spawned the ‘I AM THE TABLE’ meme. That spawned the parody mash-up of Grandpa Simpson wittering over metal. That had ‘Tallica fans threatening to shoot Lou. And who could blame them? Metallica are just machinery here, contributing noise and backing vocals rather than writing (the exception ironically being Hetfield’s ‘I AM THE TABLE’ shout – the lyric sheet says ‘tablet’). Its mannequin and blood cover art was so gorgeous the ads were banned from the Underground.

Opener ‘Brandenburg Gate’ returns Lou to Berlin (more later), his slashing and shimmeringacoustic guitar forming a beautiful moment, trailing off with ‘Wouldn’t it be lovely…’ before the bludgeoning hammers of Metallica descend. Lulu is a torrent of blood-drenched sadomasichism & psychosexual mania; Lou’s words gender-bending as he channels the central character. Ambient background sits beneath Metallica’s force and Lou’s freely twisting streams of words. This generates a queasy speedball effect on ‘Mistress Dread’, as rampant thrash meets droning vocals.

The rampant press offensive Metallica went on to defend Lulu was almost as fascinating as the record. Kirk Hammet proclaimed it ‘one of the best things we’ve ever done from a pure musical standpoint […] I can’t say enough about how great it is.’ Lulu isn’t perfect. That’s not the point. What other 69 year olds – or any established artists – are making music this visceral (particularly the explosive ‘Pumping Blood’), this vital, with such moments of poetic beauty? Had its success set a precedent things could’ve been different, but that Bob Dylan/Megadeth collaboration will have to wait. Berlin: Live at St. Anne’s Warehouse (2008)
I remember attending a screening of Julian Schnabel’s gorgeous film of this performance at the Edinburgh Filmhouse, in an even smaller screen than they’d used for Warhol’s three-hour Chelsea Girls.

Berlin is another contender for Worst Critical Reception Of A Lou Reed Album. A ‘70s concept album, it tells the story of promiscuous Caroline and her abusive partner, a broke couple hooked on speed in then divided Berlin. Lou perhaps used the method approach for the album, frequently so whacked he needed propped in front of the mic. Producer, and Alice Cooper accomplice, Bob Ezrin also shot for realism. He achieved the sound of crying children on ‘The Kids’ – as Caroline loses custody of her children – by telling his own their mother had died. He suffered a breakdown shortly after Berlin. This is hardly revisiting ‘the hits’.

A rare look backwards in Lou’s career, this live overhaul outstrips the dated sound of the original, performing the album like a stately theatre recital. The tight, muscular band – led by original Berlin guitarist Steve Hunter – assisted by horns and strings, brings real drama to Lou’s long since limited, intimate delivery. If you want an example of why it’s good to still have Lou around, see the end of ‘The Bed’, where the children’s choir slowly sliding out of tune steadily dismantles time and space. This is an example of what Lou does best – demonstrating rock music can be art – and by the final end of ‘Sad Song’’s coda, you’ll know just how massive an understatement that title is.

The Creation of the Universe (2010)
To me, the idea of a Lou Reed double live album of improvised free jazz is as much of a no brainer as a Willie Nelson album of instrumental jazz guitar (that’s Night And Day, by the way, and is great) but for some reason this was only available through Lou’s site. Capturing two near-hour-long instrumental live sets by Lou’s Metal Machine Trio, Creation is created with guitar, electronics, sax and something called a continuum fingerboard, which looks like the grill light from Knight Rider’s KITT.

What does it sound like? Ponderous uncertainty and ominous anxiety; grinding force and elegiac sorrow; amorphous ephemeral tones and aching, arcing feedback. An undulating, fluctuating sea of sound that at times moves towards the swooping and surging distortion of Hendrix’s fiercely defiant ‘Star Spangled Banner’. Notions that listening to this record may conjure include: demonic fairground rides; hysterical laughing; tortured horses; galaxies exploding into being; and vast dinosaur calls echoing over the swirl of some great primordial dark. You have been warned.

Hudson River Wind Meditations (2007)
We are, admittedly, in fanboy territory now. The most lowkey release of Lou’s last decade, this is music for ‘use’, as a background to ‘meditation, Tai Chi, bodywork’. One of the more striking features of Lou’s live shows to promote The Raven was the presence of his Tai Chi instructor Ren Guangyi, performing movements on stage as the band played, and Lou’s involvement in Tai Chi produced this. There’ are no wind chimes here though. No sounds of the wind above the Hudson. This is machine music. Endlessly mellow, ringing loops of relaxation. The sound of the serene, soporific flipside to Metal Machine Music’s fury, quietly breathing.

So here’s to Lou, and his new liver. I can’t wait to see what he comes up with next.

Previous: The Acquirers #5.5
Next: The plight of your local independent bookshop