Home / Comment / A match made in heaven: Science fiction and horror genre mash-ups 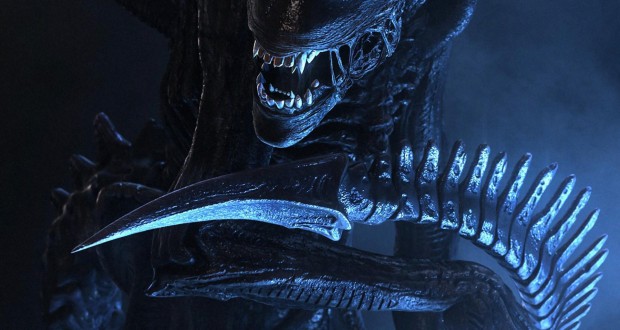 I am not a big fan of horror films. They tend to be boring and don’t have a lot to say in any real meaningful way. Having said that, I love science fiction horror films. If you don’t know what I mean by that, think Alien, Predator, Event Horizon, The Thing, The Fly, Looper, Pitch Black, Invasion of the Body Snatchers, The Terminator, and more. These films contain all the thrills of a horror movie while still having that more interesting science fiction, and often philosophical, element.

Many of the best science fiction films could also easily be classified as horror films. But what makes these two genres so compatible? Science fiction is a genre that thrives in asking ‘what if?’ It involves technology that does not yet exist (in the time the story is written/created) and often focuses on exploring philosophical ideas. Meanwhile, the horror genre elicits a fear response from the viewer for the thrill of it. 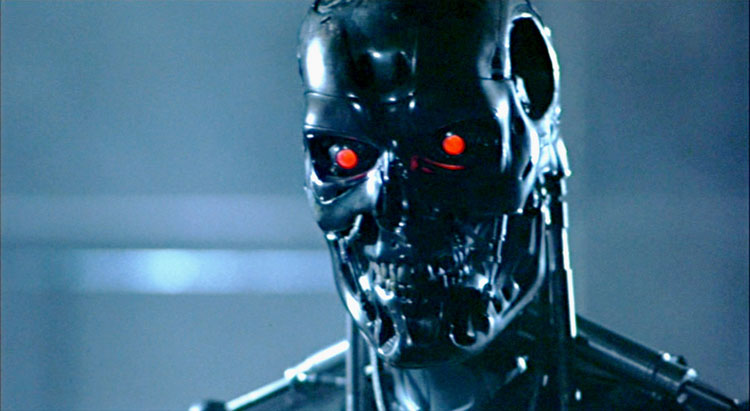 It is easy to see that asking ‘what if’ questions can easily take one to the dark side. As a race, we are rather skeptical and prone to pessimism. Many science fiction writers find that asking ‘what if’ leads them to horrific conclusions. The speculative nature of science fiction allows writers to create their own rules for the universe, thereby inventing higher stakes than might have been available to them if they were limited to a setting within the here and now.

People hate change. And change involving technology – what could be worse? What the future holds is almost limitless possibilities, with the rate of technological growth and scientific discovery rapidly increasing. Those fears can range from robots, to biological weapons (or accidentally man made viruses), to alien worlds and creatures, to more general dystopian futures. But from the trends in most science fiction – literature, film, and television – the future looks bleak for all of us.

Focusing on three of my favourite science fiction/horror films, it’s easy to see why these genres go hand-in-hand. Looper is a psychological horror, The Terminator a classic slasher flick, and Pitch Black a typical monster movie in science fiction guise. Please note, the discussion below does contain spoilers.

Original scifi film Looper, from writer/director Rian Johnson (who is currently lined up to direct Star Wars VIII), proved that original ideas are still out there and that not all films need to be remakes/reboots, adaptations, or sequels. The story of Looper is really the tale of how a villain is made: the psychological damage inflicted on a child can have devastating consequences. 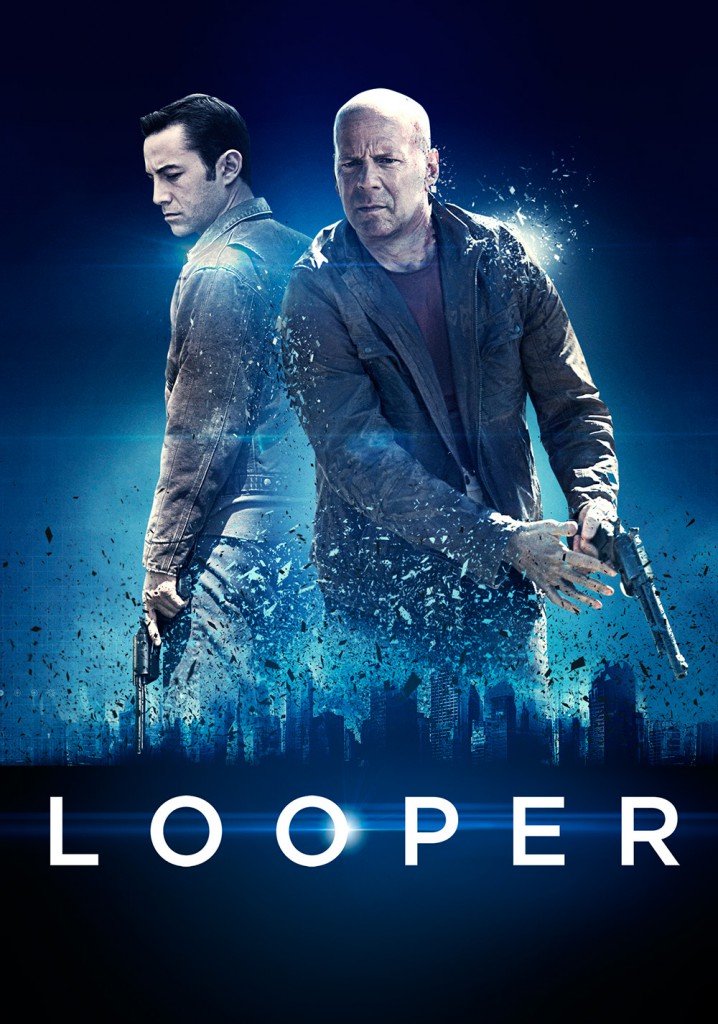 The horrors keep coming, as the film piles them up on top of each other. First there is the Loopers: Joseph Gordon Levitt’s character works for the mob, eliminating people sent back in time for the ultimate disposal of bodies (what law enforcement agency is going to be on the lookout for a missing person who doesn’t disappear for another 40/50 years?). Then, the man behind the criminal organisation decides its time to close the loops. Each Looper must kill his future self, to finish the circle.

But is this really the horror? What about all this telekinesis? Who is this guy in the future everyone is so terrified of? While we follow the protagonist on the run from his future, digging our way through conspiracies, the audience is forced to question who the real villain is.

What’s been the ultimate fear of humanity since the Industrial Revolution? Machines taking over the world, of course! In James Cameron’s dystopian future, the machines rise against their creators, forcing humans to run scared, living underground. Then the machines get really clever – they start building versions of themselves that can pass as humans. 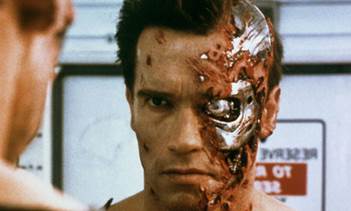 The leader of the human rebellion, John Connor, is the one thing standing in the way of the machines taking control of the world. In a truly genius move, the machines send one of their humanoid models back in time to kill Connor’s mother before the bastard is even born. So, let’s tick off the scifi elements here: robots and time travel. But that’s where the scifi ends and the horror begins (like machines taking over the world wasn’t horrific enough).

Outside of the films science fiction premise, it is ostensible a horror film of the slasher variety. There’s an unstoppable big bad doggedly pursuing the death of the heroine. The Terminator contains plenty of blood, guts, and gore – and the necessary titillating flesh that the genre requires (yup, you get to see Linda Hamilton’s boobs!). As with any good slasher film, there will be one girl left standing, the morally pure – or in this case, the mother of the savior of all humanity – Sarah Connor.

Monsters are easily synonymous to aliens; anything that conforms to a ‘scary’ idea of the ‘other’ can be classified as a monster in the trope of ‘Attack of the killer whatever’. In Pitch Black the audience is at first positioned to fear the beast-like Riddick, strong, emotionless prisoner who escapes his manacles following a crash to an unknown planet.

But Riddick (and let’s face it, a fairly pedestrian horror threat – that of a crazed murderer on the loose) are the least of the survivor’s worries. Strange alien creatures begin to attack the survivors, but the humans quickly learn that as long as they stick to the light, they should be safe. Shame, then, that there’s about to be a total eclipse, sending the entire planet into darkness. 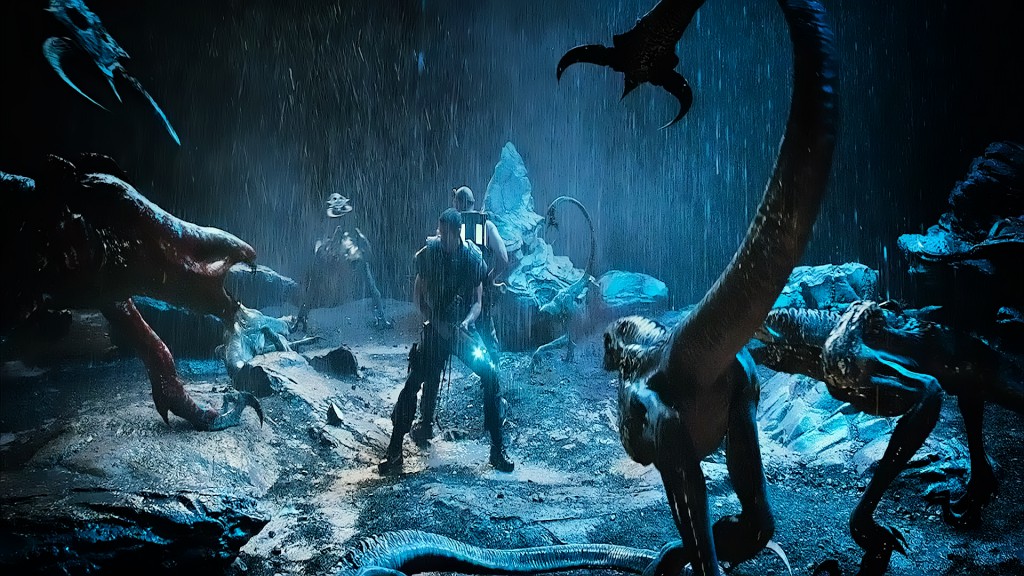 This could easily have been a straight up horror film – terrible monsters that come out at night and haunt your dreams. I sure would have had nightmares if I’d seen this one when I was a kid. But there are several elements that make this a legitimate and interesting science fiction film as well. There’s the obvious – their not just monsters but aliens and there’s the fact that they crash-land their spaceship on another planet. But our anti-hero Riddick also has some special scifi characteristics – his weird eyes that allow him to see in the dark (and incidentally making him the best defence against these crazy beasts). As such, not only do the survivors have to fight off a scary ‘other’, they also have to place their trust in someone potentially as terrifying.

Science fiction provides the creative mind with limitless possibilities in creating terrifying plots. As long as there is some kind of sense or scientific basis for the evil threat they create, writers and filmmakers can make us be afraid of almost anything. Given humanity’s propensity to fear the unknown, or even simply change, it’s easy to see how science fiction tropes can be twisted and used for the titillation and horror of cinemagoers. Personally, horror with a science fiction element is the only kind of horror I go in for.

Previous: 50th anniversary of Lloyd Alexander’s The Book of Three
Next: Political satire with John Oliver