Home / Film / Jackie: There won’t be another Camelot 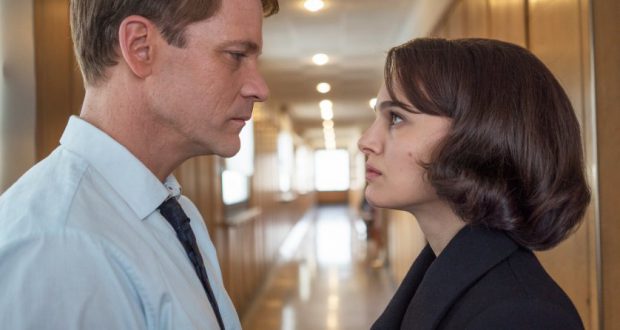 Jackie: There won’t be another Camelot

The BBFC rating before the film noted simply ‘brief strong violence’. That answered my biggest query about Jackie before I went in. Given the notorious incident on which the film hinges, the inclusion of a graphic depiction raises issues of taste and interest. ‘Taste’ because the film could be turning a real life tragedy into tawdry sensational piece of entertainment, and ‘interest’ because it may well be that Jackie has little to sustain itself before a money-shot at the end.

I think Jackie neatly avoids such accusations because the film is focussed on the emotional impact of JFK’s death on his wife. It’s hard to see the event in such glib terms. But my unwavering cynicism shall raise its head. For all the merits and good taste that Jackie possesses, by the end, so much of its promise had been squandered on shallow sentimentality.

The performances are good but the problems run deeper 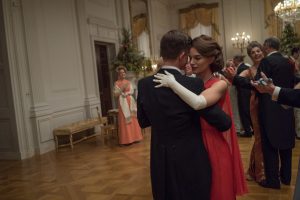 Jackie does have elements to recommend. The story is framed by Jackie Kennedy (Natalie Portman) being interviewed by a journalist (Billy Crudup) a week after the assassination. Her constant editorialising of her responses and desire to control the heritage of the Kennedy presidency show a savvy and manipulative streak that nicely offsets the tearful grieving in the rest of the film. It also questions the authority of the flashbacks we see. In fact, a running theme of the film appears to be how unreal the life of the First Lady is. This is because Jackie may well be embellishing events. On top of that, the immaculate glowing atmosphere of the White House and the slightly loopy score (which I thoroughly enjoyed) suggest that nothing in this stage-managed existence is real. It’s a very rich premise for the film to explore.

My favourite element – besides whatever they did to Peter Sarsgaard’s chin to make him look more like Bobby Kennedy – is the running idea (again, possibly planted by a biased narrator) that Jackie is a figure who is continually underestimated. She plays up to the image of the grinning deferential housewife but shows an awareness and poise lacking in the jockeying politicians who scramble to establish themselves in the new Johnson administration at a time of national crisis. There are more than a few digs at the philistine nature of Jackie’s peers who don’t know the legacy, history and culture of their surroundings. She uses this as the basis for securing her husband’s legacy.

It all comes crashing down after such a solid beginning 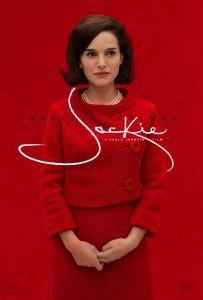 But then with the end in sight, the true nature of the film emerges. Where once stood complexity and nuance, now stand the shabby imposters simplicity and crassness. It’s hard to believe the same film is giving me such garbled and half-baked platitudes on suffering and faith. Jackie started by pulling down the glamours surrounding the presidency but then just piles on a load more at the end. The film affirms that America is great, the President the father of the country, and the First Lady its mother. These were the people who gave America its golden age – blah blah blah. Mawkish nostalgia and drivel!

You’ll forgive me if I find this American exceptionalism particularly hard to swallow this week.

This is Oscar bait. It’s a character-led piece with a teary central performance, depicting events fetishised by the American Academy’s old white men as part of their beloved Golden Age. It waves the flag of wishy-washy patriotism to appear relevant in a time of division and crisis. Jackie isn’t challenging or insightful in the end, it’s a pile of platitudes. Jackie had chops but decided not to follow through on them which is all the worse. Nothing irks like wasted potential. By the end, it simply reeks of intellectual cowardice.

Verdict: A promising drama that backs out of saying anything relevant or meaningful. What a pity.

Previous: A Series of Unfortunate Events: You would be better off somewhere else…
Next: Hacksaw Ridge: You are free to run into the hellfire of battle without a single weapon to protect yourself