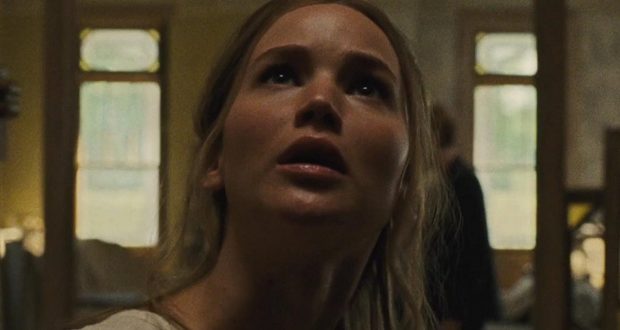 Mother! is the worst sort of film to review. Not because it is bad: those are great to dig one’s teeth into. No, Mother! is problematic because it benefits from knowing as little about it going in as possible. Therefore, it is incumbent upon me – a critic who is recommending it wholeheartedly – to say as little as possible for fear of ruining it for the audience. I don’t even want you to watch the trailer. I know it is right below the paragraph, but that is just the standard format for these reviews. Don’t watch the trailer. Go watch the film.

To take some sort of crack at this, Mother! starts out as though it were going to be horror film. It’s got a sinister edge and creepy goings-on occur from the start, but it’s unclear from what source. I was genuinely worried at the beginning that we were getting some rather played out haunted house or home invasion film. Something well-trodden about the domestic space being violated by dark forces. We are, however, dealing with Darren Aronofsky as writer and director, so things were never going to be that simple.

It might not be his most graphic film, but this is certainly one of Aronofsky’s grimmest 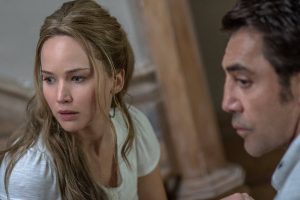 The biggest compliment I can give this film is that I was completely unable to determine its trajectory. It’s not even as though Mother! sets up an obvious course that it leads you along with red herrings and then subverts. This is not a film interested in adhering to boring screenplay templates and it develops in interesting and strange ways. Even at the end, it surprised me with yet more bold ideas being brought into the narrative.

Aronofksy remains an able craftsman. The film looks great and does one of my favourite things, in allowing me to talk about it establishing a very particular mise-en-scène (congratulations to those of you playing film review bingo). The whole thing takes place in a half-constructed/newly refurbished house, and its suffused with this gauzy lighting. There is at once a clash between a very tactile environment and an innate dreamlike quality. This is further embellished by Aronofsky’s tradition of coaxing strong performances out of his actors. 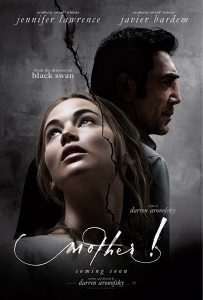 I should perhaps give one word of warning. This film gets pretty hardcore in certain aspects and will wantonly offend anyone who wants a safe and reassuring trip to the cinema. This is the director of Requiem for a Dream, after all. I can see now the consternation and blind antipathy generated by people who don’t like being challenged. The kind of people who would use the word ‘weird’ as a pejorative and become rankled the moment anything makes demands of them. The kind of people who view cinema as a saccharine spoonful of clichés to help wash reality down. This film is not for them.

But then, maybe it is. The whole point of challenging, intelligent and strange films is to confront you with new ideas and experiences. We should be prioritising the mushy sheltered minds of the general cinema-going public. Perhaps, that way some of them might wake up from their Hollywood-induced stupor. They will no longer view the churned out studio products with uncritical and sycophantic anticipation, but rather find them wanting because, by comparison to Mother!, there is nothing new and exciting there. I can hope anyway.

Verdict: Go see Mother! Learn nothing about it and go see it.

Previous: It: You’ll float too
Next: Nostalgic Impulse: Gladiator (2000)