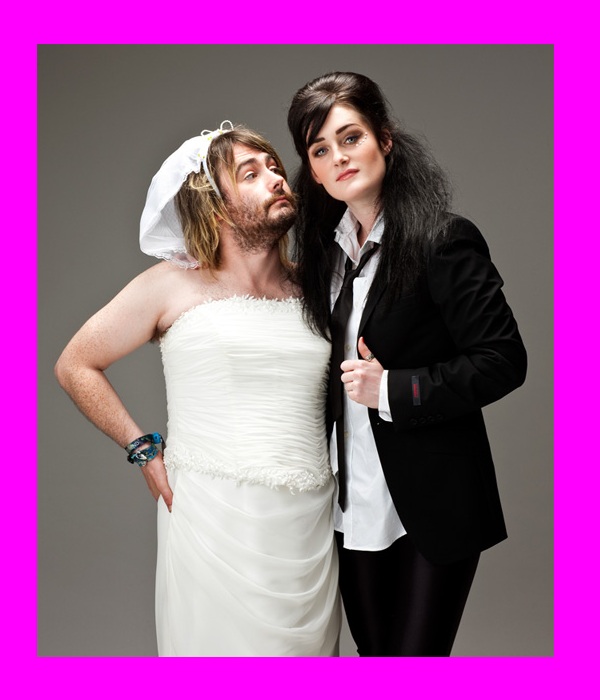 ‘If any of you knock over that speaker and kill my bass player, I’ll fuckin’ kill ye. I’m not joking.’

It’s a little after midnight in Brighton’s Pavilion Tavern – a quiet, slightly dim lit seaside bar hosting Alcopop Records’ eighteen hour alternative even to the alternative to the Great Escape festival. The swaying PA, raised precariously on stands, is being held aloft by audience hands as the packed crowd surges towards the makeshift stage. As well as several gems, the Great Escape line-up also offered swathes of young people earnestly emoting over their acoustic guitars. In their bedrooms. At mid-tempo. This is not Fight Like Apes. The Apes convey a vision of life as gravely serious and absolutely absurd as adolescence shows us all it really is. Like an overdose on a bouncy castle. Or discovering you just bought a counterfeit Jeff Koons. 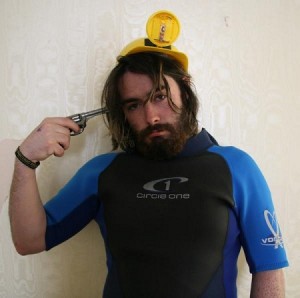 Another striking difference between the FLApes and most of the acts that descended on Brighton is movement – onstage and beyond. There was no stood rooted to the spot playing here, and only the explosive, cello-wielding riffola of Finnish punks Honningbarna made as much effort to break the fourth wall of the stage and venture into the politely watching mass before them. Halfway through the set FLApes frontwoman MayKay left stage left and, as the band played on, made a full lap through the crowd, keyboardist Jamie ‘Pockets’ Fox stood astride the monitors, scouring over the audience’s heads like he was on the prow, surveying stormy waters. She later strode straight into the bounding, sweaty tumult, unfazed and barely missing a step. Being over six foot, I always find it awkward when you find yourself in the pit next to people short enough to land on. It’s even more awkward when one of these people is the frontwoman of the band you’re moshing to, and more awkward still when said frontwoman could likely beat the shit out of you.

I was already sold on the idea of Fight Like Apes from my friend Mr. E’s pitch, ‘Imagine McLusky were teenage girls’. Sure enough, their albums are the most exciting things I’ve heard since Angel Haze’s ‘Werkin Girls’. I’d barely even heard the name before Great Escape, so this is less a love affair so much as a frantic weekend fling in a seaside town, with a crazed woman who intimidates as much as she strikes awe. Which is convenient, as the FLApes would soundtrack that perfectly.

Synths are usually used to lay a polished, icy gloss over songs. The smooth upholstery of high-end corporate product. This is not Fight Like Apes. Across their two albums thus far (including the fabulously titled The Body of Christ and the Legs of Tina Turner, sleevenotes including the band members’ communion photos), garish synths duel so roughly they grind. Dayglo kitsch keyboard tones revel in their own ridiculousness, over a perpetual pulse of driving bass and supple drums. The resultant deliriously dizzy march of glory sounds something like the latter half of Nicki Minaj albums should do, after the deranged, maniacal hip hop has had its way with you. Both MayKay’s voice and the barrage of sound frequently sound to be pressing breaking point, and Pockets’ backing vocals bring to mind some belligerent pirate bellowing, vein throbbing at his temple. It’s difficult to hear something like the chorus of throwaway firing song ‘I’m Beginning To Think You Prefer Beverley Hills 90210 To Me’ (‘SUPLEX! SUPLEX! BACKBREAKER!’) and not grin like an idiot. 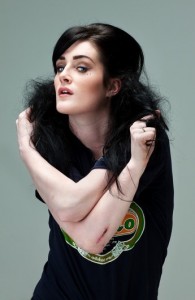 Riding this maelstrom of sound is bouffant vocalist and keyboard player Mary-Kate ‘MayKay’ Geraghty – a personality more than a match for the barrage. If a female voice over synths suggests a pouting, preening seduction, this is not Fight Like Apes. Though suited perfecting to nerdy male fantasies of Manic Pixie Dream Girls, MayKay’s something far more dangerous. Pithy and gleefully foulmouthed (thanks to my Irish friends for having explained in advance the offence ‘dropping the hand’ provokes), rivals are summarily dismissed as ‘mutts’ and ‘cows’, and ‘Indie Monster’’s record industry advice of ‘don’t say fuck’ was roundly discarded early on by the whole band screaming it on ‘Jake Summers’. In ‘Pull Off Your Arms And Let’s Play In Your Blood’, MayKay matter-of-factly informs that ‘My well-read friends inform me that I was a cunt’. Line’s like this and the ‘I want to cut you with glass’ opener of anthemic ‘Lend Me Your Face’ (‘I’ll bust it up but I’ll replace it’ – sing along!) make a mockery of bland ‘strong woman’ platitudes. In soaring vocals, luscious melodies and a bag of bad attitude, MayKay dispatches try-hards, know-it-alls, feckless fools and those who’ve disappointed her with an air of disgusted boredom.

Which is not to say FLApes are one-dimensional. The beauty of ‘Kathmandu’’s chorus, the elegiac ‘Jenny Kelly’, the hazy waves of ‘Ice Cream Apple Fuck’ – and ‘Megameanie’ must surely rank as the best song under 10 seconds since Brakes’ ‘Cheney’. There is always something fascinating about hard-as-nails women’s susceptibility to their own emotions. From Billie Holiday, Dinah Washington and Aretha Franklin, to Brody Dalle, Minaj and Angel Haze, both ends of the emotional spectrum are enhanced by the contrast. And so it is with MayKay, perhaps the greatest frontwoman since QueenAdreena’s KatieJane Garside. Enemies lashed all the more contemptuously for the tender emotions they once inspired. 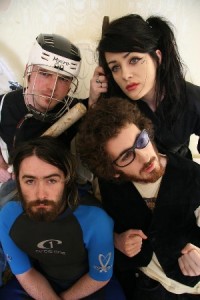 Fight Like Apes are the kind of band whose records create their own little world, around their own obsessions (meatballs, waistcoats, roll-ups, toast). They can soundtrack breakneck nights out just as easily as curling under a duvet with the lights low. Like any good drunken rush should have, there’s an undercurrent of melancholy. The frenetic pace here is energy tinged with desperation – a sense of any release having had to be been earned.

In this post-Theatre Is Evil world, the FLApes have funded album number three through the crowdfunding site Fund It, with funders chucking them €10 to ensure this sound continues. The sound of running off a pier, shooting for the stars. It is after all, as they’ll tell you, the lovely sound that makes you love them.