Home / Books / The Hunger Games: Catching Fire – Remember who the real enemy is 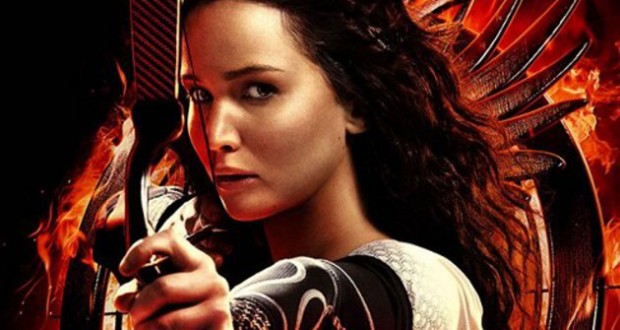 I have a tendency to resist anything that is really popular. Call it stubbornness, narrow-mindedness, or plain stupidity. Whatever it is, it is a character flaw I am aware of – although not actively trying to rectify. I finally gave in to the good-natured bullying of a friend and Hunger Games fan girl, and read the books.

The writing isn’t always stellar – Suzanne Collins has a tendency to have paragraphs that are too long – but it really is a great story. And Katniss? Total female badass. I admit that I was surprised; I have never been a massive YA fan. But I do appreciate good stories, no matter what the intended audience. The first film in the franchise also didn’t bowl me over – I thought there was some good acting and interesting premises, but it didn’t really explain anything.

Thankfully, the book made up for all of the film’s failings. I was immediately hooked – reading in every tiny break I had, staying up late and fighting the drooping eyelids to read just that little bit more before sleep took hold. If you even somewhat enjoyed either The Hunger Games or Catching Fire films, please do yourself this one favour: read the books.

It is unfortunate that, like many adaptations, the films fall well short of the original novels (see a previous article about the debate over original vs. remakes), but they can still be enjoyed separately. As such, I will review The Hunger Games: Catching Fire in two separate sections: 1) as a stand-alone film and 2) as a book adaptation.

The film picks up shortly after the first film left off. As can be expected, Katniss (Jennifer Lawrence) and Peeta (Josh Hutcherson) are having a hard time adapting to life after the games – aka life after killing a whole bunch of people in order to survive. Did someone say PTSD? They did – and it is running rampant in the victor’s village.

Since the cameras left, Katniss and Peeta have given up their ‘love charade’ and barely speak. But now the cameras are about to return for the victory tour – where the victor’s will be paraded about in each of the twelve districts as a distraction from the ‘real problems’ of Panem. The truly terrifying President Snow (Donald Sutherland) makes a surprise visit to see Katniss before the tour begins. He threatens her – and her loved ones – making it clear that she needs to dampen the unrest she began when she won the Hunger Games. 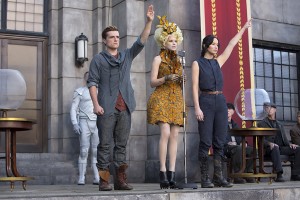 The cameras roll and the lovebirds are back – much to the disgust of the angry, moody Gale (Liam Hemsworth). The tour begins and the stakes are upped. Katniss and Peeta have to perform better than they ever have before, but it is difficult to do when the people around them are being beaten. As the tour is completed, they are given little time to unwind. The 75th Hunger Games (the third ‘Quarter Quell’) are announced. In honour of the anniversary, the tributes for each district are reaped from the existing pool of victors. District 12 only has three tributes from which to choose – Katniss, Peeta, and Haymitch. Let the games begin!

The film is long – clocking in at just under two and a half hours. But it doesn’t feel too long when you’re in there. It’s fun, action-packed, and political. The acting is spectacular – very few actors could pull off such long close-ups as Jennifer Lawrence does. And if there was any doubt in your mind as to the casting choice of Josh Hutcherson in the first film (I admit, there was in my mind), it will be a distant memory after seeing Catching Fire.

Movie Bob complained that the film sets up all these great characters to pit against our protagonists in the second Hunger Games they’re forced to participate in. However, they all die quickly and generally off-screen. He wanted to see more blood and gore. This, to me, is a fundamental misunderstanding of the point of the film and the story. 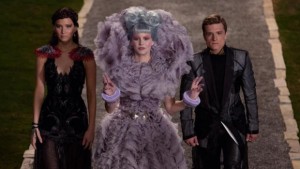 While the ‘games’ were absolutely fundamental to the first film, they aren’t the central force of Catching Fire. What is central to the sequel is the political moves and countermoves, the fuelling of the oncoming revolution, and the nature of PTSD. Violence and senseless killings? Not so crucial.

Unfortunately, the film (much like its predecessor), does not do justice to the world Suzanne Collins created in the novels. There is little to no meat to the portrayal of the districts, the government, or any real context given to the political situation. When I first watched The Hunger Games I didn’t feel that I understood the world much. If I had not read the books, I’m not sure Catching Fire would have done all that much to illuminate the situation further.

Having said that, the bulk of the action of the film is thoroughly enjoyable and entirely watchable. You can’t help but root for Katniss and Peeta while loathing everything the Capitol stands for. Sure, it might be a little heavy handed with the foreshadowing and the obvious use of ‘this guy’s bad – he wears loads of make-up’ but ‘this guy’s good – he doesn’t.’ But hey, no film is perfect. It is often harder to be subtle with films – especially when taking on material that is originally written in first person (but I digress). 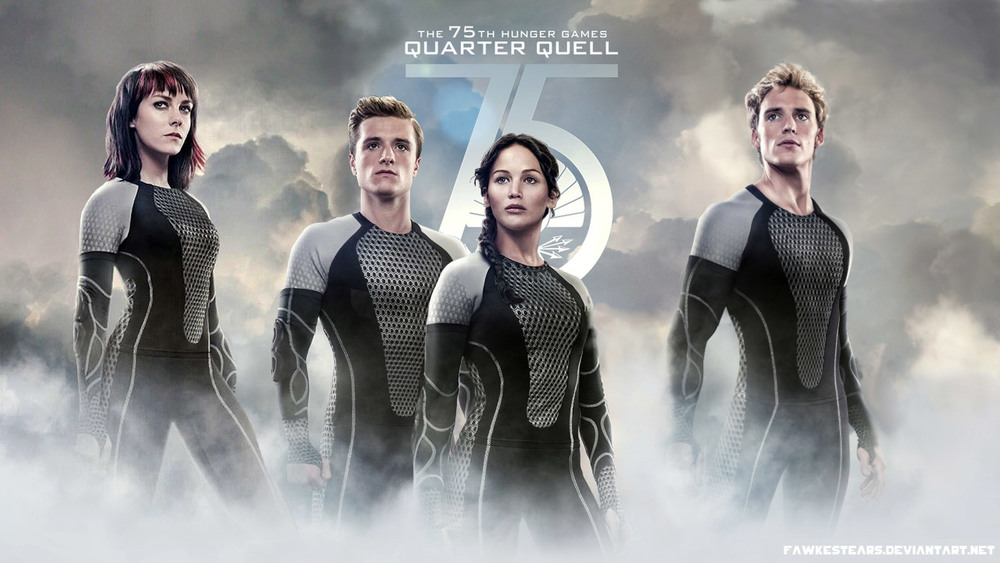 How many fans of the books had some issues with the first film? Lots? It was enjoyable enough, but it did let down the source material. Why did Katniss buy the Mockinjay pin instead of having Madge give it to her? What about the ending – it wasn’t nearly as powerful without Peeta being on the brink of death when she brought out the berries. And Peeta still has both legs? What? These were just a few issues I had once I read the book and re-watched the film.

Catching Fire has a few corkers as well. For me, a big issue was how much easier Katniss seemed. She’s kissing Gale left right and center. Then Peeta. Then Gale. Ummmm, skank much? Ok, so not that bad, but still. She’s not so free with her lips in the book. 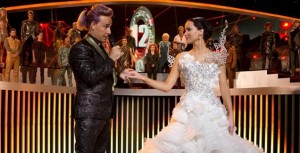 The Hob is set on fire, but the Hob is only mentioned in passing once or twice. There’s no explanation as to what it really entails or why it has such an emotional significance to Katniss. What about Darius? The Avoxes? The reality TV show with voting for wedding dresses? The wedding is barely a thing in the film. Disappointing! And Prim? Hardly the callused, wise woman we meet in the novel.

I have to admit that a lot of what I feel is ‘missing’ from the film are things that would be difficult to include without Katniss’s internal monologue. I love knowing what she is thinking and why she behaves the way she does; an unfortunate flaw in filmmaking – at least unless we want all films to have endless voiceovers. I was glad that they included Johanna’s elevator nudity, although I didn’t get that she was making fun of Katniss for being prudish – rather than just teasing in general. However, Jennifer Lawrence’s face is priceless.

Ok, so this has mostly take the form of a rant against everything the film missed. I think is the right of any book fan when it gets adapted into a film. Despite all that it missed, I do think the film holds up. It does an admirable job at getting a lot across in two and a half hours. When I’m too lazy to re-read the books, Catching Fire will be an excellent substitute.

Previous: Chuck Wendig: The only writing advisor you will ever need
Next: The Acquirers: Lasers and Disappointments