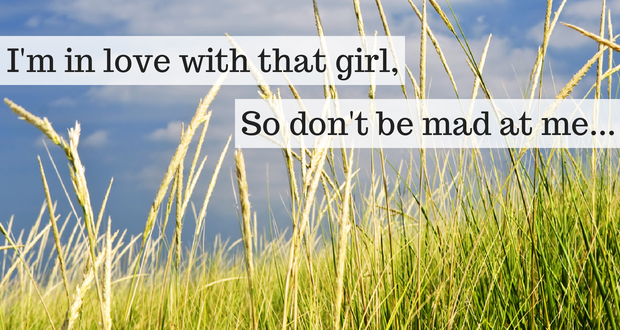 For better or worse, I was listening to Justin Timberlake’s album 20/20 while doing some free writing. The track, ‘That Girl’, came on and the lyrics inspired me in a rather unusual way. I’ll say no more than that. I hope you enjoy the story.

An explanation of the events as they happened, that’s what you asked for. You want to know how I saw it all – how I feel about it now that it is all over. Why did I do it? It is simple really. I did what I did for love.

You don’t understand. No one does. I loved her from the first moment I saw her. She was mesmerizing. I watched her for hours, hidden away behind windows, amongst the bushes, from up in a tree. Always I remained hidden. I watched her roam the grounds, she seemed to move aimlessly but contented through the gardens.

Her legs were strong, lean, graceful. As she moved, I could see each tendon contract, playing its part. They were athletic legs, the kinds of structures a gymnast would work their entire lives sculpting to perfection. Her light brown hair was thick and stiff. The wind would tug at it playfully, creating ripples and swirls as she stood motionless, looking out at the pastures beyond.

I knew no one would approve, especially not my family. To them, I was a disappointment. I slurped me tea, bit my nails, came home with ripped knees and dirty clothes. ‘For heaven’s sake, Henry!’ My mother would yell, ‘Wipe your shoes before you come inside.’

It was not the kind of love my family would understand.

Sometimes I wondered what it might be like to have been born into a different family, a supportive family who accepted people for who they were. Instead, I had to watch my parents, week after week at our market stall, turn their nose up at potential customers. To me, paying customers are paying customers, what does it matter beyond that?

‘You’re not welcome here’, my father would say.

The Goldbergs nodded and walked away without comment. I quietly stole a bag of potatoes and found them amongst the crowd. When I finally got to them, I didn’t know what to say. The old man smiled at me, simply nodding. I walked away without a word being spoken.

As they made their way back out of the market square, my mother spotted the Goldbergs again. My mother sucked air through her teeth and glared. She saw my brother Billy eyeing up the Goldberg’s daughter. Without pausing, she hit him on the back of the head, knocking him off his chair.

‘You stick to your own kind, you hear?’

I thought perhaps Billy would understand. He’d been through it before. Billy would sneak out the window of our room to visit Phuong in the evenings. Sometimes I followed him. I liked to watch them during their private moments. Whispering to each other beneath the trees on the edge of the farm, taking cover in the darkness.

They grew careless in their passion for one another, and with each risky encounter they were driven further into ecstasy. Until one day father caught them. He whipped Billy and made Phuong watch him.

‘If I catch the two of you together again, I’ll kill him.’ said father.

The look in his eye told us all he meant what he said. Phuong cried but didn’t leave until father dismissed her. Now she’s married to Thomas Stapleton. When we walk past them in town mother whispers under her breath that it’s a waste of a good Christian boy.

I feel sorry for Phuong. The only thing I know about Thomas Stapleton is that he used to kill frogs for fun, whacking them over the head with rocks by the stream when we were boys. Billy didn’t look at Phuong anymore, though I know he wanted to. He never snuck out to see any girl after Phuong. I don’t think there was any other girl for him.

When I first saw her, I knew. I had found my Phuong. And I vowed to be braver than Billy had been, to never let anything come between us. The moment I made the vow, I was afraid. More afraid than I had ever been, for I finally had something to lose.

Gathering the courage to approach her took time. I moved slowly, watching from afar for days before finally realizing my goal of standing within speaking distance. And then, to actually speak? I felt as though I would never manage it. When I did speak to her, I startled her, so croaky and alien was my voice.

I stared dumbly at the grass after barely croaking out a ‘Hello’. We stood mere feet from one another, immobile. The silence expanded as the distance between us seemed to balloon until she discretely edged herself in my direction. Slowly, I reached out to touch her face. She did not pull away.

Gently, I began to stroke her hair. I let my hand follow the curves of her body, down her neck, across her shoulders. The muscles in her back relaxed, the tautness apparent in the skin loosening as she grew used to my touch. If I had worried about being too forward, my fears were soon allayed.

This became our habit. Spending time together in peaceful silence. We never spoke. But there was no real need for it. We knew what the other was thinking. I could have lived like that forever – forever stroking her hair, smelling her skin, silently enjoying her love.

Father ruined everything. Like he destroyed Billy’s love for Phuong and mother’s rose bushes. The way he always burnt the fish.

I don’t think I can be blamed for what happened. He looked so casual, so innocent, wandering through the garden, watering the plants, checking on the chickens, fixing the fence posts. But I knew better. I saw the way he looked at her.

She was afraid, at first. He approached her slowly, cautiously, much the way I had done. She did not run. Lulled into a sense of security. I suppose he smelled like me, looked like me, she recognized him as family. He ran his hands over her, down her back, slipping them lightly over her rump.

The anger was blinding – an instant blackout. I couldn’t feel anything but the blood pumping in my head, the heat in my face, on my scalp. My extremities were numb, uselessly hanging at my sides. I had been watching them from the kitchen window. The light glinted off the knife block, catching my eye from the bottom left of my field of vision.

I grabbed one of the handles and ran out the back door, across the field. I said nothing to him, he deserved no explanations nor the chance to defend himself. Lunging forward with the full weight of my body, I stabbed him. I stabbed him again. And again. And again. I continued to thrust with my knife long after he had ceased breathing.

When I came to my senses, I found that Daisy had run off in the commotion. Chasing after her, I could hear my mother’s cries of alarm behind me. I had no concerns for my father or what would become of me, all I cared about was Daisy. Was she alright? Did she still love me? She must. She must love me. Only me.

I know you will never understand our love. No one ever will. But our love is pure, it’s real. Daisy, the love of my life, is my family’s beautiful brown Jersey cow.

Previous: It’s Batman’s 75th Birthday! Some of Batman’s best moments in print
Next: Women in Hollywood: Protagonists, actors, and directors