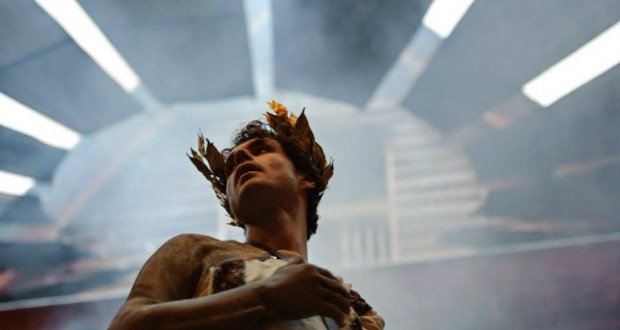 The Globe’s production of Titus Andronicus is the latest attempt to put the canonical oddity on stage. The play follows the bloody repercussions of a Roman conquest of the Goths. The general Titus returns to Rome only for his prisoners to be inducted into Roman society and orchestrate a bloody campaign of vengeance against him. The play is gruesome, loud, and jubilant in its display of the depravities wreaked in this fictional Roman setting. 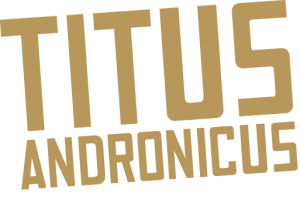 Titus is something of an underappreciated gem in the Shakespeare canon. It is one of the earlier plays and the first stab at a revenge tragedy by the playwright; it gets denigrated by some for being a trashy and immature effort, whose appeal is lowbrow salacious action rather than the lyricism of the writing. I have once heard it referred to as a play from Shakespeare’s ‘difficult period’. I wholeheartedly disagree. Not only is the play a rich and rewarding experience, but this latest staging by the globe is a thunderous rendition

Yes, it is supremely violent

The crux of most arguments against Titus are that it is an exploitative gore-feast, whose rampant body count and vicious variety of violence are a tasteless pandering to the sensibilities of the primary audience of the Elizabethan revenge tragedy. The nature of the content is certainly not in dispute: yes, it is supremely violent. And yet that is not necessarily an indication of deficient quality. Shakespeare’s most lauded play, Hamlet, has after all been whimsically characterised by Tom Stoppard as a ‘slaughterhouse – eight bodies all told. It brings out the best in us’. 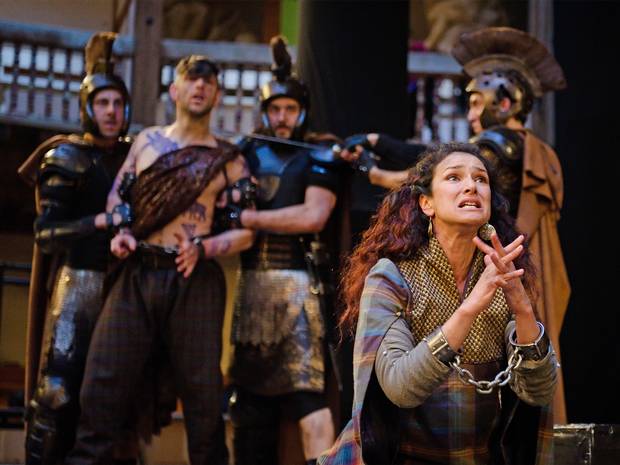 There’s no doubting that there is a relish with which the play goes about its bloody business and that any audience with the least familiarity with the work will be expecting a graphic performance. The Globe does not shy away from this aspect in the least. I don’t even think this is an aspect to haughtily look past from the position of disinterested intellectualism – the play is if anything a rumination of the nature of violence. It has two cycles of vengeance and follows the recriminations of a bloody war – each new atrocity spills into the next and violence becomes socially endemic rather than socially reproved.

Live audience members should expect to be sprayed with theatrical saliva, wine and (fake) blood 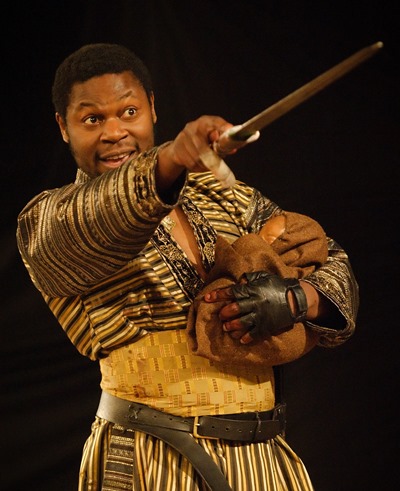 This particular staging takes a traditional style with its costume and setting – it’s a world of togas, tunics and centurion armour. A touch that is played to good effect is the induction of the audience into the scene. Regular attendees of the Globe will be used to actors invading the standing room but in Titus the emperors and senators often address the mob of Rome from atop mobile platforms in the crowd, as though wading through the cluttered forum. Live audience members should expect to be sprayed with theatrical saliva, wine and (fake) blood as the action barges its way through the press of bodies that have come to represent the Roman mob.

This may highlight a point that will put some off the live or transmitted versions of the play. Titus is very willing to depict the sound and fury (sorry…) of military parades, hunting parties and reveling drunken escapades: there is no doubting it seeks to capture the cacophony of Rome. It’s a play with many cries of anguish, fear and rage. If you want a quiet and dainty theatrical experience, this play will not deliver. Not to say that the actors and staging are not able to display subtlety and wit (indeed they do), but the prevalent style is muscular and loud.

The actors must be lauded for their endurance. This play is roughly three hours long and the demands on their vocal cords go beyond the usual theatrical projecting. Their voices must be raw with screaming. And Titus demands deft physical acting too. The play has some shockingly convincing violence. Aaron’s head butting and skewering one of his victims stands out. 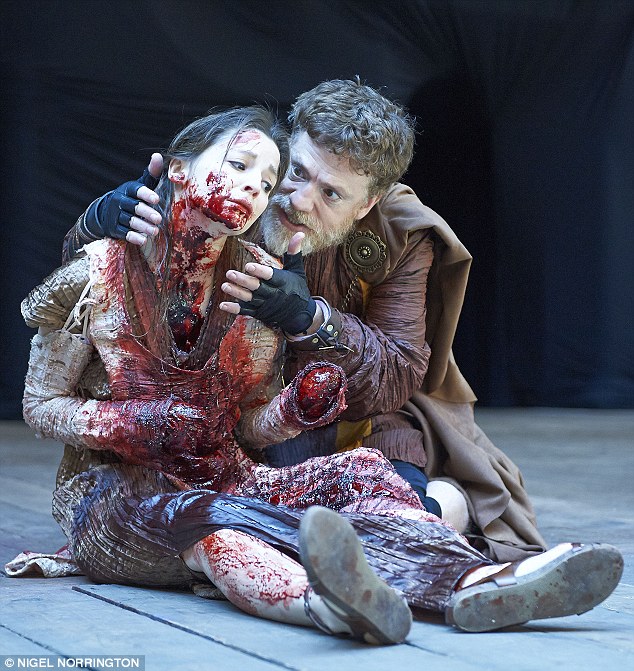 The Globe is always a bastion of strong performing standards though I do have one niggle with William Houston’s protagonist in the early stages. Houston’s voice is one which naturally cracks as he shouts and coupled with the rasp he adds to his voice, this very effectively conveys the unhinged Titus we see at the end. In the earlier stages it seems a little more incongruous, though it must be said this version of Titus establishes the descent into madness right from the off. Nevertheless, Houston is best when his oscillating theatrical voice is matched by the shifting mania and despair of the old general closer to the climax.

The cast overall is marked by a deft ability to jump from the horrid to the humorous. In many ways the director, Lucy Bailey, has designed this as a black (very very black) comedy. The primary villains Tamora (Indira Varma) and Aaron (Obi Abili) epitomise this. Varma’s Tamora has to shift rapidly between grieving mother, cool manipulator, vengeful nemesis and deliverer of some damn good quips. Aaron orchestrates rape, murder and mutilation but also delivers the first ‘your mother’ joke in English literature. It’s a play of clashing sensibilities as much as clashing tribes but I always felt the gallows humour supported rather than undermined the abject subject matter of the piece.

Verdict: If you have the stomach for it Titus Andronicus is fun, harrowing and extravagant production.

Titus Andronicus is being staged by the Globe Theatre Company and broadcast via The Globe on Screen.