Home / Film / Nocturnal Animals: It is sad and violent 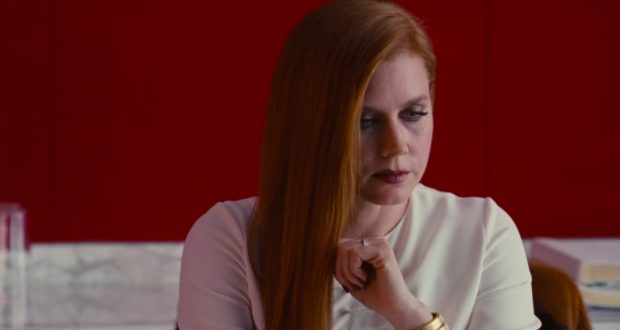 It’s rare for me to be taken aback by a film but Nocturnal Animals not only surprised me but really got under my skin. Expecting a formulaic thriller, I found a harrowing, stylish and thematically rich drama. It bears saying that the film is not for the faint-hearted. By all accounts, you will see films with a lot more gratuitous content and violence. What makes Tom Ford’s film stand out is that the violence and its consequences are so forcefully presented; it quite overcomes the desensitisation so often induced by modern cinema and television. The body count is nothing compared to most flicks but the film is riddled with an overbearing threat level and immaculately composed tableaux of cruelty.

Nocturnal Animals operates on many levels both thematically and structurally. One half of the film follows Susan (Amy Adams), a dissatisfied art exhibitor living in the poised but sterile environment of LA’s elite artistic scene, occasionally flashing back to her ill-fated marriage to Tony (Jake Gyllenhaal). The other half of the film dives into the narrative of a manuscript sent and dedicated to Susan by her estranged ex-husband. The dark story of the manuscript could be a decent thriller in its own right but is elevated by the sophisticated execution of the framing device with Susan.

The less you know going in, the better

The film is one I am going to struggle to talk about given that it is enhanced by knowing less about it. I can at least admonish about the rather full-on directorial choices that crop up. Most obviously, for instance, Nocturnal Animals opens to footage of naked morbidly obese women dancing and cheering with pompoms, sparklers and some basic pep rally equipment. It would be safe to say that this puts the film firmly outside of the mainstream.

That might sound utterly contrived and exhibitionist for an opening. Even the initial context will not justify it for some, but as with so many elements of this film, the significance becomes apparent with time. In this case, these uninhibited and beaming women are probably the only happy people in the film. The initial gawping judgement will dissolve when you compare them to the preening and overwrought lifestyles of Susan and her associates in the art world. Interestingly given director Tom Ford was a high profile fashion designer, he depicts the precious and manicured existence of these affluent fashionistas as a vacuous and unsatisfying, concerned more with the material appearance of success than any substantive achievement. The bevy of ladies in the opening does not pander to satisfy someone else’s expectations of them and appear all the healthier for it. 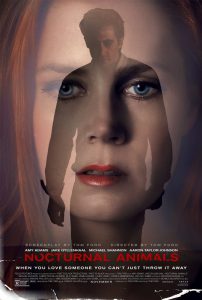 I am avoiding talking at all costs about the narrative of the book within the film. It has by far some of the most unsettling material I have seen this year and never stoops to crass measures to achieve this. It is simply built on a traumatic event which spills out into more morbid consequences. This is delivered with fierce performances by Gyllenhaal (who straddles the ex-husband role in the outer story and the main character in the book story) and Aaron Taylor-Johnson, and given further chilling implications when contextualised to Susan’s reading of the story.

Coverage of Tom Ford tends to focus on his fashion background and his keen sense of style but he clearly has much to say evidenced by this film. He is able to deliver a very sophisticated take on cinematic approaches to the act of reading and to literary adaptation. Nocturnal Animals is based on the passed over novel Tony and Susan by Austin Wright which Ford has gone some way to rescue from obscurity – and deservedly so.

Verdict: Nocturnal Animals was haunting and provocative. I won’t forget it anytime soon.

Previous: Arrival: What is your purpose?
Next: Those end of year lists…