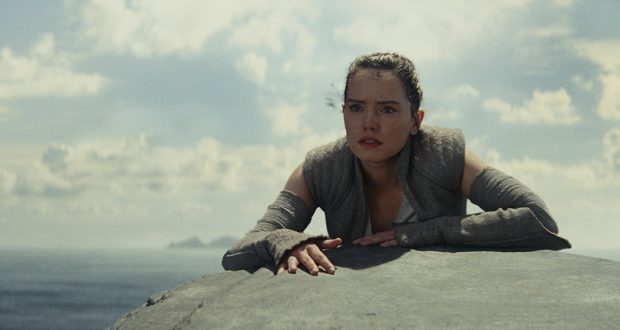 I did not like this film. That may surprise some who have seen only the effusive gushing of the broader critical community. It will not surprise anyone who remembers my opinion of The Force Awakens. Or how Rogue One left me despairing for the direction of this new franchise. I wish I could change my track but if the film is boring, derivative, and badly plotted, then I will call it out. It is not even as though this film failed me in interesting and exciting new ways. The Last Jedi has all the same problems as its predecessor so the franchise does not seem to be averting its course.

Defence of my criticism

s seems to rest on a number of fatuous arguments. That the filmmakers needed to return to the core concepts of the franchise after the disaster of the prequels. That they need to cover some of the same material and insert all these callbacks to appease the fans. This is illogical because the presence of a bad film in the franchise doesn’t limit one’s ability to write a compelling new story. This is a Star Wars sequel so the presence of lightsabers, TIE fighters, and the rest of it surely makes the association clear (as if the title somehow doesn’t). Fans lapped up new material in The Empire Strikes Back without indignation and The Return of the Jedi was criticised at the time for repeating the central threat of the original film. Perhaps audiences today have lower standards. It certainly seems the case that these films have no desire to qualify themselves on their own merits.

To grasp how hollow this endeavour is, let’s look at the plot. We pick up with Rey seeking tutelage from Luke on his solitary island, whilst the remnants of the Resistance fleet are chased through space by the domineering armada of the New Order. This obviously channels Luke’s training with Yoda on Dagobah and the pursuit of the Millenium Falcon in The Empire Strikes Back. Except here it is BIGGER because that will obviously improve the quality… Does the barefaced repetition of the plot necessitate that it will be poorly executed? No, but it IS poorly executed.

Finn and new character Rose are given a series of arbitrary objectives to tie themselves up until the plot resolves. None of it contributes anything to the direction of the story. Similarly, Poe Dameron has to spin his wheels until the plot can move forward which will apparently happen when Rey arrives. Except her arrival is technically incidental to the pursuit of the fleet through space and just happens to coincide with the action sequence kicking off the third act. To reiterate: not one of the three protagonists significantly advance the plot.

Compare to The Empire Strikes Back. The actions of Vader and the crew of the Falcon affect the outcome of the pursuit through space. Though Luke is secluded in training with his master, he is the ultimate objective of the chase so it still relates to him. The characters are engaged with and are active participants in the plot. That is not much to ask from a film. This is not the application of unreasonable standards. The characters of an adventure film should propel the story and that does not happen in The Last Jedi.

Name me three characteristics that Finn has. Go on. How about two? One even? 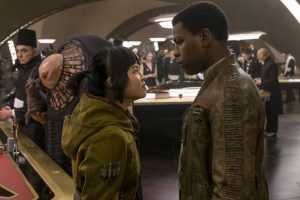 Then we have the issues with the characters. Now, Star Wars has always relied on archetypes (the rogue-with-a-heart-of-gold, the young hero with wanderlust, etc.) but never used that to limit the characters. By the end of the second film, the original characters were deeper and their relationships were more complicated. By the end of the eighth film, Rey and Kylo Ren have gone through the exact same poorly implemented character arcs twice. Finn has yet to be given a purpose or a definable character. Poe largely exists to haze bad guys with quips and get told off by Leia. It is notable that the only characters of any depth are the established alumni.

The reliance of the Star Wars old guard to prop up the Muppet Babies new cast is a crippling flaw. Leia, more than anyone, determines the course of this story and yet is relegated to a supporting role. Arguably, our new heroes are a distraction from the one character able to achieve anything. Most of the significant character work involves Luke, Rey and Kylo. Rey is once again hamstrung by her irrelevant abandonment issues. These anxieties feed into nothing and isolate Rey from any thematic synergy with the rest of the film. In the old films, the progression of the characters fed into the outcome of the plot but there is no such dovetailing of theme and story here. She is more or less treated as a catalyst for Luke and Kylo’s arcs.

Kylo Ren is not complex character, it is just that everyone else is utterly bland

And Kylo Ren is an issue in himself. Let us leave aside how limiting it is for the main villain to be an explicit Darth Vader-wannabe. Some might mistake Adam Driver’s angst-ridden moping and tantrum-throwing as depth and complexity but that is only because he is in the same film as Daisy Ridley and John Boyega’s onscreen non-entities. I will concede the idea of being tempted to the light is a nice concept but a one-sentence concept does not a good villain make. His arc here is a point-for-point retread of his arc in The Force Awakens: be evil, have doubts, edge towards redemption, recapitulate towards the dark side. He is a nice analogy for the film overall. A stagnant retread.

The villains remain a disappointment. Andy Serkis as Snoke is the best performance in the film but is, you guessed it, irrelevant. And his name is still stupid. General Hux undercuts any level of threat with his lame comic antics. The goofy humour throughout the film is poorly judged, for that matter. Imagine for a second if Domhnall Gleeson’s campy joke of an officer were replaced by Charles Dance being efficient and menacing. That is what you want from a baddie. Hux’s main contribution is to state the obvious with his bridge officers. And then we have Phasma. An utter tumour of a character with no demonstrable role, and established as some sort of rival to Finn for a thematic rivalry that does not exist. Her inclusion in this series is baffling.

The unattainable standards am I holding this film to? A story and characters 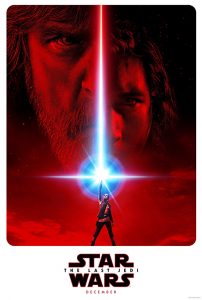 The Last Jedi breaks so many basic rules of good screenwriting. I actually find myself liking the film less as I write this. There is a writing maxim that you should ‘show, don’t tell.’ The idea is that audiences and readers respond more when themes, actions, or traits are demonstrated rather than simply explained directly. If you want Kylo Ren to be threatening, have him do something brutal or callous on screen, rather than just having characters state how scary he is. If you do that and all he ever does is throw tantrums, mope and botch major military operations, it undermines your characters when they regard him as a threat rather than a joke. It’s beyond being isolated to characters, as this flaw suffuses the writing. So much of the dialogue in The Last Jedi is clumsy exposition exchanged between characters who do or should know the information anyway. This is beneath screenwriting 101.

The Last Jedi reeks of laziness, stagnation, and amateurish filmmaking. We get to the end of the film feeling as though this franchise is still getting through its expository set up because nothing has ultimately changed. By the end, the status quo has been reset to where it was at the start. Poe and Rey have only just met for the first time. But for some middling details, the plot is more or less where it was at the start of The Force Awakens. It all feels like a set-up for the proper sequel that is forever around the corner.

But it’s never going to come, is it? We’ll just have more plot-free, character-free, 150 minute long slogs where nothing of consequence happens until we all die.

But you all clap because someone said ‘may the Force be with you’ or they made the right TIE fighter noise or they referenced something in Return of the Jedi. Ugh.

Verdict: It is badly made. What more is there to say? You’ll see it anyway.

Previous: Firestorm by Lucy Hounsom
Next: On criticism: Misconceptions of the opinionated