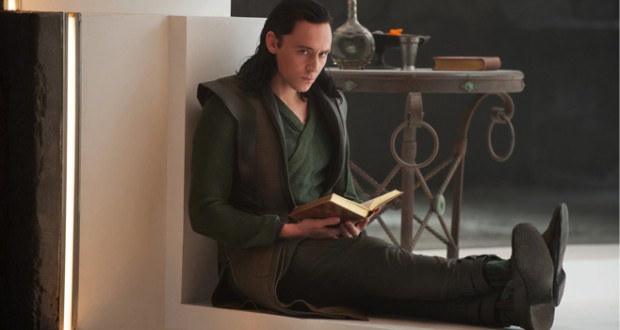 It has been a busy few weeks for me socially speaking (I know, poor me), so it was nice to have a weekend devoted to much film watching. I saw Thor 2: The Dark World and Ender’s Game at the cinema, enjoying the post-summer blockbuster season. Meanwhile, I decided to enjoy an old-school cult classic in 1080 HD at home. I have been long ashamed to call myself an Australian without having seen Mad Max, I’m glad I can finally tick it off the list.

The latest installment of Marvel’s cinematic universe brings Chris Hemsworth’s Thor and Natalie Portman’s Jane Foster back to the big screen. While Thor might be the titular character, it is time to admit the who the real star is: Loki (Tom Hiddleston). He stole the show in Thor, but managed to play well with the ensemble cast in The Avengers. Thor: The Dark World, however, has its best moments whenever Hiddleston is on-screen. Unfortunately, he doesn’t appear quite enough – and whenever he’s off-screen, the film struggles to find its feet.

The film starts incredibly slowly, kicking off with a short summary and introduction on the film’s baddies. Oh good, lots of crazy exposition. If you can get past the whole ‘here are the Dark Elves – they are like totally evil and have been our biggest threat forever, despite us making out it was the frost giants last time’ thing, you should be fine with the rest of the story. The Dark Elves have very little charisma, or any real motive apart from ‘vengeance’. These days, vengeance seems to be the easy way out for creating motivation for bad guys. 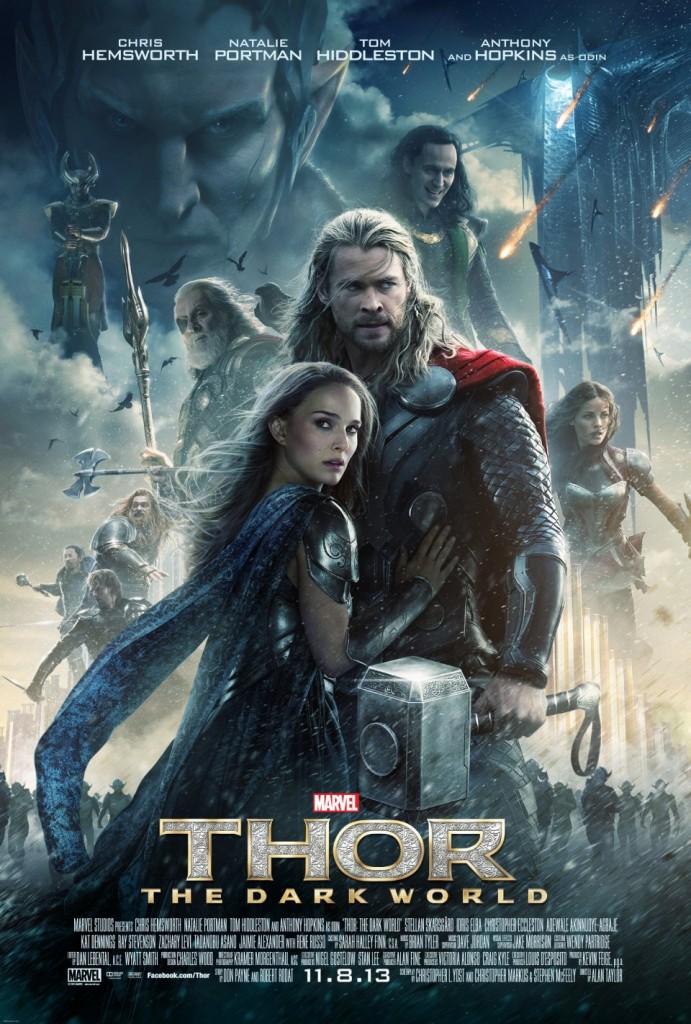 Natalie gets minimal screen time and she doesn’t actually do terribly much. The banter between Thor and Loki is brilliant – with Hemsworth and Hiddleston pulling off the perfect brotherly relationship. And that cheeky smirk of Loki’s? It truly is the best thing ever.

The trouble with Thor: The Dark World is the same problem that almost every sequel has. Where there might have been a very clear vision for the first film, the writers lose their way for the follow-up, unsure of what should come next. The romance should continue, with more peril and a new baddie. It just would have been nice to have baddie with a real reason to be there, while actually giving Natalie something to do. It also lacked the growth that the first Thor had – this is not a film of personal growth, or even of growth in relationship between Thor and Jane. It starts and ends, leaving the viewer wondering what the point of it all was.

Just make sure you stay in the cinema for both credit bonus scenes. Yep, that’s right, both.

Verdict: Unless you are a die-hard Marvel or Thor fan, steer clear of this one.

I should preface any discussion of this film with the following: I have not read the novel by Orson Scott Card, so can only look at the film on it’s own merits. One thing to note up front was the pacing – it felt like a book rather than a film, which unfortunately, doesn’t tend to work. It felt very long for a kids’ film and it was working up to one final twist to make the entire film hold together. Sure, it was a good twist, but I’m not sure it was enough to make the rest of it worth it.

The cast is very good. Asa Butterfield (of Hugo fame) is fantastic. Finding good child actors can be difficult, but the kid pulls it off spectacularly. He is definitely one to watch. Some of the supporting child actors also do very well, including Hailee Steinfeld, Aramis Knight, Abigail Breslin, and Moisés Arias (aka Rico from Hannah Montana). The adult cast brings some heavyweights to the fore with Harrison Ford and Ben Kingsley. I enjoyed watching Ford play a ‘love to hate him’ character, but I’m not so sure I bought Kingsley as a Kiwi. 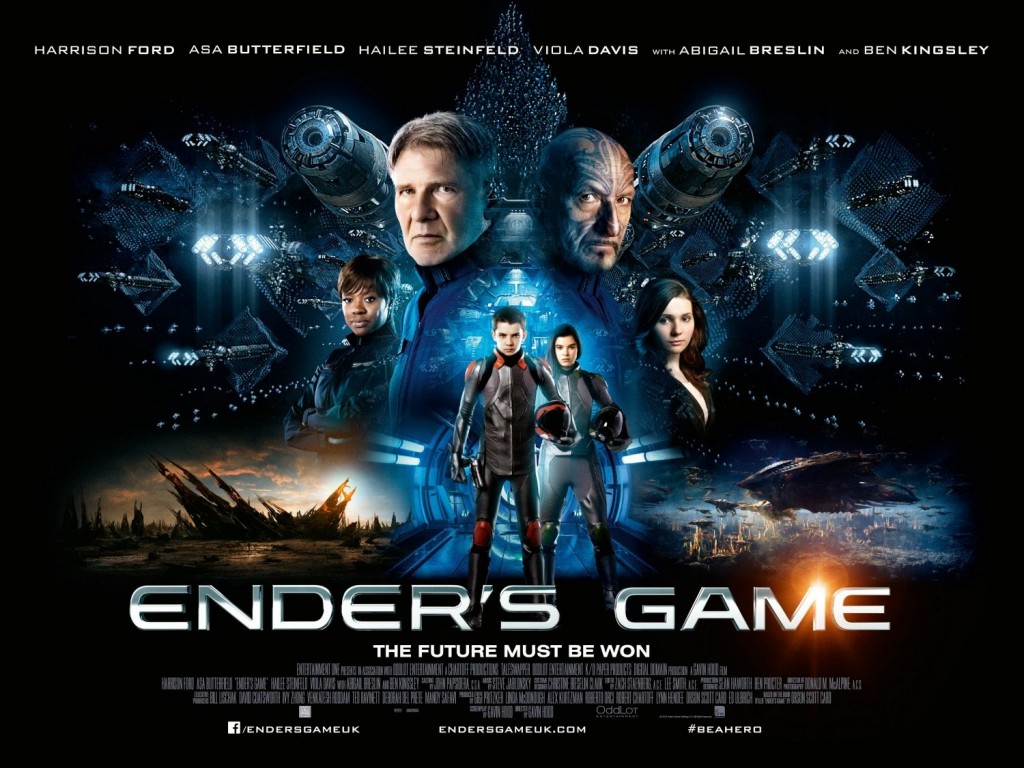 A big problem with science fiction films is getting the balance between world building and characterization right. I felt that Ender’s Game was too much on the side of world building. A lot of things happen to Ender and we do get to see him react, but he is more of a passive force in it all. He doesn’t drive the narrative, and while his reactions are important to the story, the film doesn’t do enough to make the viewer worry he might fail. Like in Thor: The Dark World, the enemy is very underdeveloped. However, that is the point of this film, rather than a failing of it.

I enjoyed seeing a science fiction film with politics and strategy at its core, but it was hard to cling on to the premise that kids are fundamentally better at war tactics than adults. Sure, some kids are far better at abstract thinking than the average adult, but I’m not sure I’d trade experience and wisdom for innovation when it comes to protecting the world.

Verdict: Decidedly average film despite good performances from all the cast.

After two blockbusters, I felt like something a bit older. My partner recently purchased the Blu-Ray box set of all three Mad Max films (I have no idea why), so we figured we’d give the first one a go. To be perfectly I honest, I knew practically nothing about this film other than it was made in Australia, starred Mel Gibson, and had cars. After watching this film, my knowledge of it is pretty much at the same level.

The film moves from scene to scene without explaining anything. Too much exposition is awful, but giving the viewer zero exposition so that they don’t know how to orientate themselves to the story is also bad. Supposedly, the film is set in a kind of dystopian near future, but there’s very little to indicate this other than a ‘Halls of Justice’ sign that’s a bit run down and the police headquarters being a total dive. The streets of Australia look completely normal – there appears to be a working capitalist economy, and the Aussies still enjoy going to the beach. Ok, so there’s some seriously crazy motorcycle gangs, but is that really so far from reality? 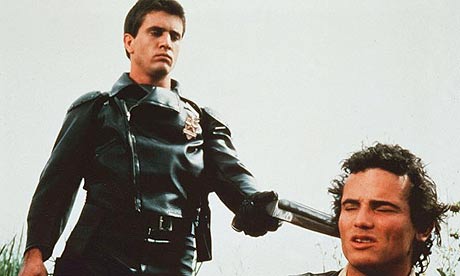 So what exactly is the premise of this film? Max is a road cop, whose job it is to run down the badass gangs that terrorise the neighbourhood. When Max brings one of the gang members to a fiery end, the gang vows revenge. The gang then one of Max’s loved ones to a similar demise, leaving Max to also vow revenge. Both parties are fuelled by revenge – one side is crazy, the other is just a bad parent.

The plot makes little to no sense, none of the characters have personalities, depth, or motivations, and the setting is simply rural Australia. I have no idea how this film managed to spawn two sequels or become such a cult classic. Apologies to all the long-term fans I might be offending. I have heard the second film is much, much better though (and from looking at the Blu-Ray cover I finally understand a reference the children’s show Recess made many years ago), so I won’t write off the entire trilogy based on an initial fumble.

Verdict: Terrible. If you want to give Aussie cinema a go, there are many better films than this.

Previous: The Social Conscience of Motörhead
Next: The Acquirers: Dark Elves or Space Elves?