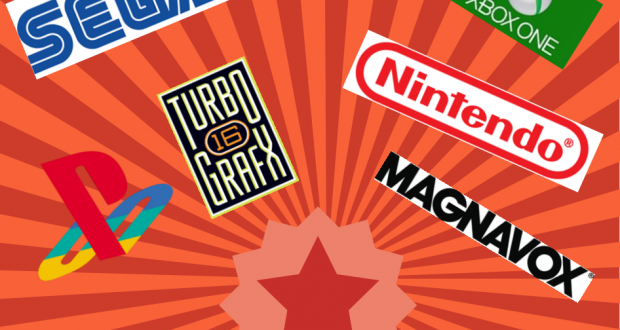 The general consensus is that there have been eight generations of video game consoles since the 1970’s. Some were more successful than others but all of them have lived and died on the take-up by consumers. For many of the console generations TV marketing campaigns were the forefront of getting the consoles into the consumer’s living room. Over the years there have been some amazing TV spots. From the now quaint commercials of the 70’s, the ‘too cool for skool’ adverts of the 80’s and 90’s, and some downright disturbing ads from the 2000’s. I’ll be taking you through a tour of some of gems of game console history.

Although video games have been around in some form or another since the 1950’s (like Tennis for Two), it was not until 1972 that the first home console was released, the Magnavox Odyssey. The console itself was primitive by today’s standards. Take a look at this advert from 1973:

Most of the initial games were variations on moving white squares around the TV screen. There were several overlays that could be placed on your television to simulate colour graphics. It was moderately successful but things changed once Atari’s all-conquering arcade game ‘Pong’ was released in 1975. Magnavox cancelled the original Odyssey and released the Odyssey 100, which only played pong (such was the popularity of ‘Pong’).

There were several other models of the Odyssey (including the 200,300 and 400) but the increased competition caused by other companies producing their own cheap Pong clones created a market glut causing the video game crash of 1977.

The Fairchild VEC continued to sell despite the crash but it was not until 1980 that the console market revived again, a result of the conversion of an arcade hit. This time it was Space Invaders.

The Atari 2600 was released in 1977 but it wasn’t until 1980 that sales went through the roof. The main selling point was the arcade experience at home. So games like asteroids and missile command helped sell thousands of consoles.

Home consoles were now big enough that established stars were appearing in advertisements, including this classic starring Morecambe and Wise.

Unfortunately, the good times could not be sustained. Inspired by the success of the 2600, there was a flood of copycat consoles and low-quality games (including the infamous ET game). This caused a market collapse in 1983 and most of the US console manufacturers exited the market.

There was hope from the east, however, and that same year Nintendo released the Famicon (or NES in Europe and the US) in Japan. It supported detailed sprites, large colour pallets and better sound then the previous generation, and when it was released in the US in 1985 it became the best-selling console so far (only beaten in 1994 by the Sony PlayStation) with Super Mario Brothers becoming a household name.

Nintendo has strict licensing contracts with its third party developers which meant Nintendo had to okay a game before it could be released. This prevented a repeat of the problems of poor quality games that the 2600 suffered from. The adverts from this generation started to market towards children (no sign of Morecambe and Wise here). The adverts often conjured up images of living in a new future of video games like this UK advert:

In 1985 (1986 in the US and 1987 in Europe), Sega released a competing console the Sega Master System starting the first major console war. While the system struggled in Japan and the US (where the NES was already dominant) it performed well in Europe.

Adverts from this era start directly comparing themselves to other consoles, like this advert from 1987 where the master system has ‘twice as much memory’ and the ‘first video games ever in 3D’.

The fourth generation was characterised by the ‘Bit Wars’. The bits in this case refer to the processor architecture. While this meant almost nothing to consumers, it became the defining feature of the generation and all the consoles were marketed as 16-bit (as opposed to the 8-bit architecture of the third generation). The first fourth generation console was the Turbografx16 released in 1987 in Japan (1989 in the US).

In 1988 (1987 in the US & 1990 in Europe), the Sega Megadrive (Genesis in the US) was released. While sales in Japan were moderate, it was very successful in Europe and the US, popularised by its arcade ports of ‘Altered Beast’ and ‘Shinobi’. This is the era when adverts started to get a little weird. I still don’t know what’s going on in this advert:

In 1990 (1991 in Europe), Nintendo responded by releasing the Super Famicon or SNES. It’s release took the market share of the Turbografx16 but the Megadrive had already captured a large and loyal fanbase (helped by the popular Sonic the Hedgehog games).

This was the true console war and both Sega and Nintendo spent large amounts of money marketing the merits of their systems and wooing third party developers with exclusive game contracts. One example of the console war was the ‘Genesis does’ campaign:

Late in the console lifecycles, both Sega and Nintendo began to experiment with using Compact Discs as opposed to game cartridges. Nintendo partnered with Sony, but the partnership was dissolved before any product was released. Sony would go on to use the work with Nintendo as the basis of the Sony PlayStation. Sega meanwhile released the Sega CD but it was expensive and did not sell well in either territory

Check back for part two, when I’ll be discussing the fifth generation of consoles all the way up to the eighth generation.

Previous: Sky Ferreira, racism, and being politically correct
Next: The Acquirers: Swordfish