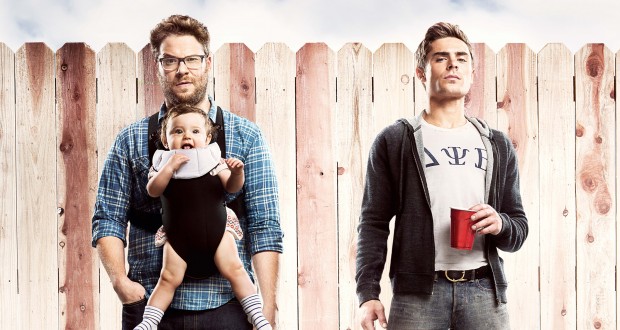 This film has been advertised as an escalating prank movie. The trailer doesn’t even hint at anything deeper than that occurring beneath the surface. As such, I had very little desire to see this film. But, after a few glowing reviews, I figured I’d give it a whirl – I had nothing to do anyway, why not take a trip to the cinema? 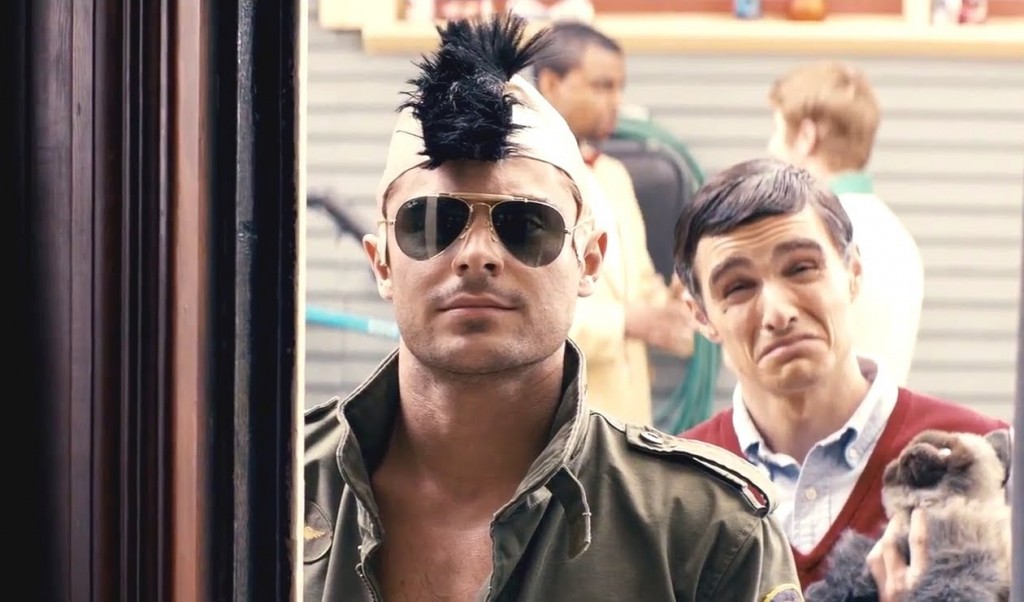 Surprisingly, the film has a lot more going for it than simply tit-for-tat escalating pranks. Who would have thought that characters in a film like this would be given genuine motivation? And good acting? Oh yeah, and real, relatable issues that the characters are going through? Well, I was sure as hell surprised.

That isn’t to say that the film doesn’t deliver much of the expected – the standard fraternity/college film nonsense with alcohol, drugs, girls, and parties, alongside fairly predictable (although amusing) jokes – but it also adds a layer of depth to the standard faire. Bad Neighbours (titled Neighbors in the US) doesn’t turn the genre on its head or say anything completely unexpected or original, but it does at least bring a little more heart to this otherwise lacking genre of film.

Married couple Mac (Seth Rogen) and Kelly (Rose Byrne) have spent all their money on a new house in a good neighbourhood. Now that they have a baby, they are eager to start their life as a new family. Disaster strikes, however, when the house next door is sold to a fraternity, headed up by Teddy (Zac Efron) and Pete (Dave Franco). 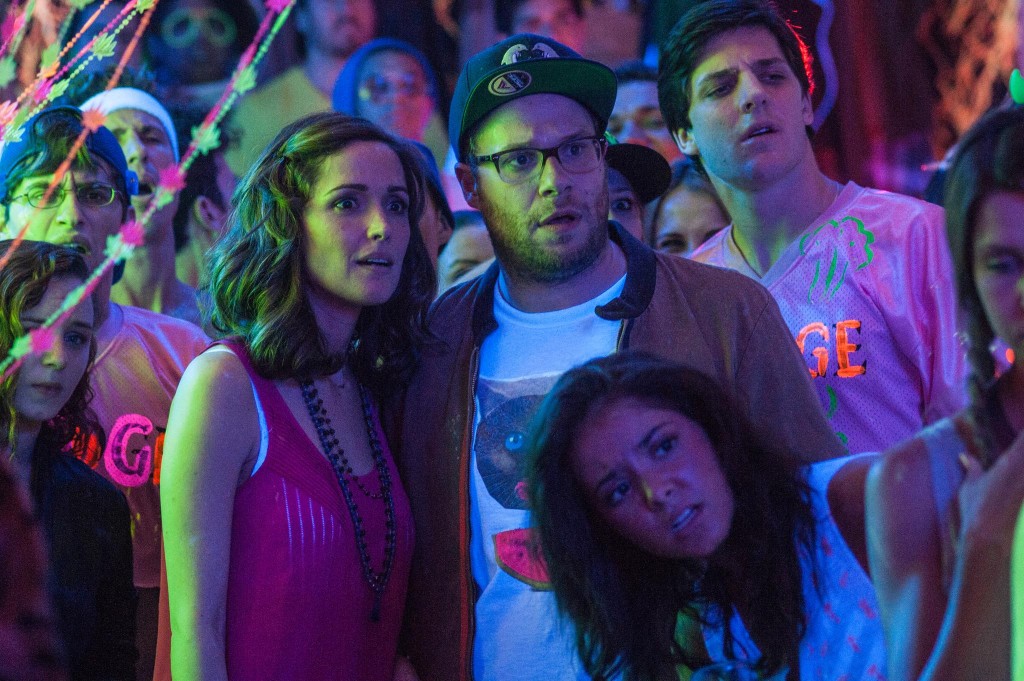 In an effort to retain an element of ‘cool’ while keeping their safe family dream alive, Mac and Kelly introduce themselves to the frat boys with a joint and a request to ‘keep it down’. As expected, the frat house doesn’t really know how to party quietly, leaving Mac and Kelly forced to make a noise complaint to the police.

From there, a war escalates. While Mac and Kelly try desperately to get the fraternity kicked out, they find themselves having more fun than they’ve had in a long time – or at least since the baby was born. Meanwhile, frat president Teddy realizes that his time as top dog is soon over, and makes it his mission to make the most of it while he still can.

Good comedy, great cast, and a lot of laughs

Bad Neighbours is genuinely funny. My only problem with it is more a personal preference issue – a lot of times when I found myself laughing, I almost felt guilty. If I laugh at these things, am I encouraging this kind of behaviour? It definitely had some Ricky Gervais-style cringe humour – when you know where things are escalating to but really hoping it won’t quite get there. But of course, it always does. 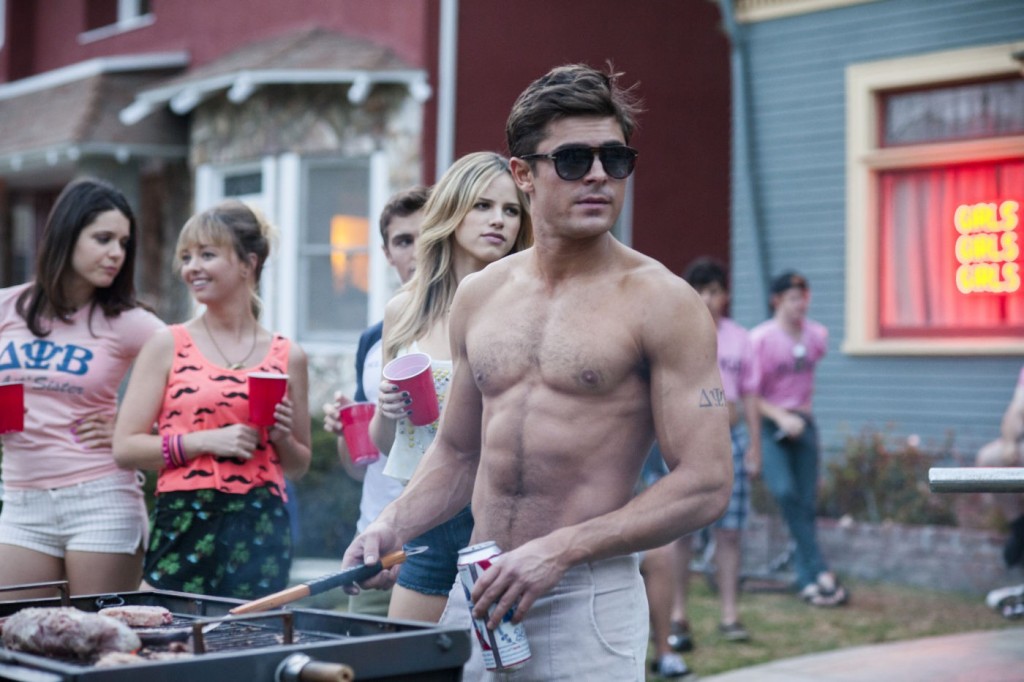 What is fun about the film is that you find yourself rooting for both parties – you understand Mac and Kelly’s frustrations while also being on board with Teddy’s need for retaliation. What helps is that each side has their own motivations and ‘issues’ they are rallying against. Once Mac and Kelly ostensibly ‘win’ the battle, they are unable to let it go. Why? ‘Cause they’re having so much damn fun!

Meanwhile, Teddy is actually an excellent frat president. He looks after his brothers, is supportive and caring, and wants them all to have the best year ever. Sure, he may be trying to cling to his role for personal, selfish reasons, but he is generally good to his frat brothers. Each time Mac and Kelly act against the frat, the audience waits eagerly to see what Teddy can come up with as retaliation or just how he and his brothers will get through it.

The cast is great, giving wonderful comedic performances with excellent chemistry. Rogen and Byrne work really well together. There’s been a lot of hype around Zac Efron, who really does live up to it. But for me, the best performance of the film came from Dave Franco. Christopher Mintz-Plasse is given nothing to do, and is wasted.

Verdict: Surprising fun and genuinely funny. A solid comedy with great performances. It does exactly what it says on the box.