Home / Film / Inherent Vice: Is that a swastika on that man’s face? 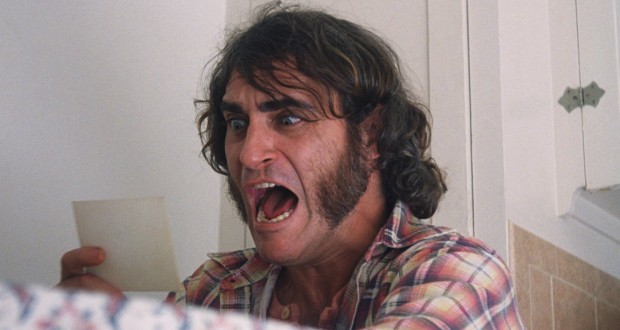 Inherent Vice: Is that a swastika on that man’s face? 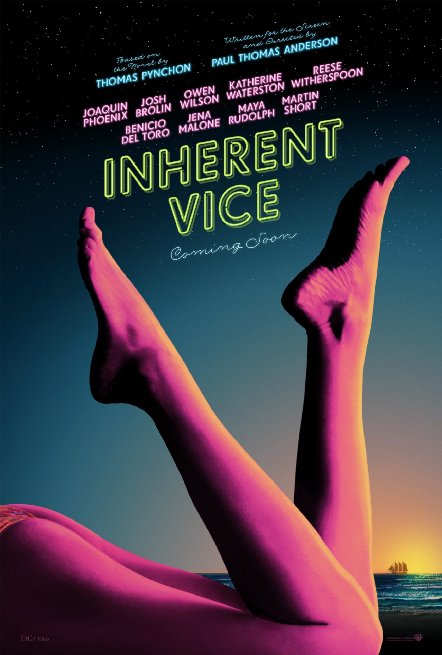 There was a certain apprehension with which a friend and I began viewing Inherent Vice. Paul Thomas Anderson is a lauded film maker and I am a fan of many of his films but they are rarely easy watches. I left The Master with a lot to think about and it took a long period of rumination for me to settle on liking the film. Even There Will Be Blood, ostensibly his accessible film and the big award winner, leaves the audience with plenty to ponder. On top of being a P T Anderson picture, Inherent Vice is also based on a Thomas Pynchon novel! Pynchon, the camera-shy author renowned for taking the confusion of the reader to its literary apex, has now been committed to film. How could we possibly hope to follow the film?

As the credits rolled, my friend turned to me and said through rising laughter ‘It wasn’t hard to follow; it just didn’t make any sense!’ This more than adequately summarises the film (but keep reading the review) in both its observation and its sentiment. You have not a hope of entirely comprehending this film but you’ll have enjoyed the meandering yarn nonetheless.

The trailer for Inherent Vice is perhaps a little misleading 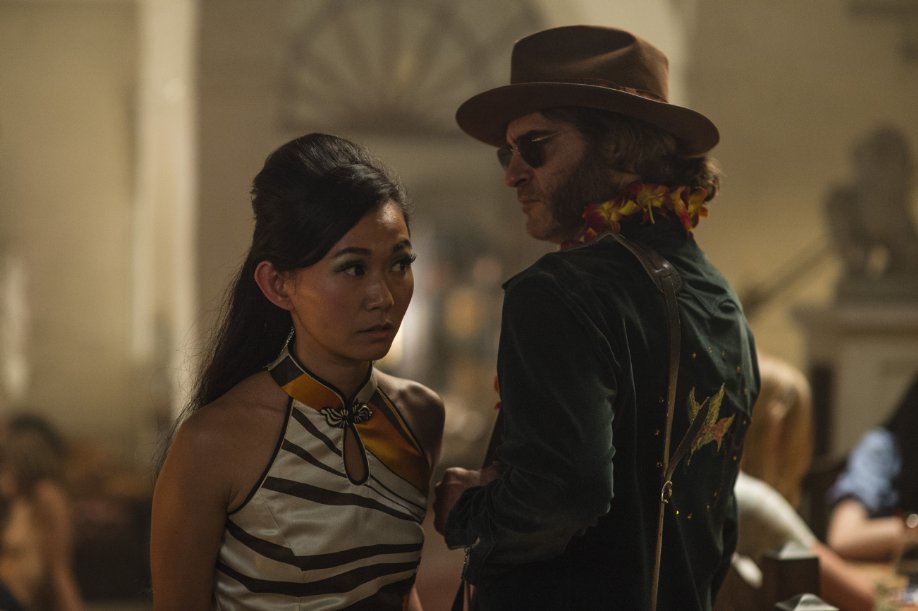 Some may think this film a mess but that would misunderstand Inherent Vice entirely. This is a very precise distillation of anarchy. The trailer for Inherent Vice is perhaps a little misleading. With its Sly and the Family Stone soundtrack, caper-esque plot outline and zippy editing, the trailer makes this seem like a lighter entry in the Coen Brothers canon – indeed the Stoner Noire aspect of the film lines it up with The Big Lebowsky to an extent. The film does have pop to it, does have comedy and does feature those plot elements but this leaves out a lot. The film has concertina-like pacing, with the zippy sections interspersed with more long and steady conversation pieces, and its period music isn’t so much a soundtrack as a larger score of diegetic sounds that rise into the characters’ hazy consciousness.

Then there’s the plot. The trailer doesn’t so much lie as limit. The plot put forward by the trailer is just one case amongst several interweaving ones, most but not all linking to the Jewish land developer Mickey Wolfmann whose drug abuse has seen him fall in with neo-Nazis. What the trailer suggests is a central perspective framing the story which doesn’t really exist. The cases and their interrelations are not neat and not simple to follow (which is realistic in an absurd way, I suppose) as the main character Doc Sportello darts around between cults, bikers, lawyers, cops, FBI agents, dentists, brothels, and Black Panthers.

The best frozen banana-sucking credentials ever committed to screen 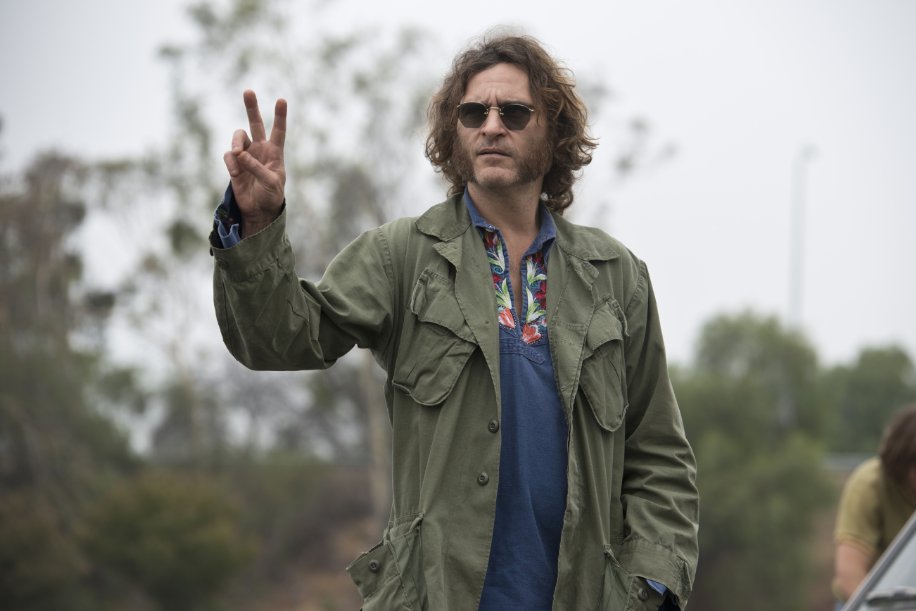 This may raise the question as how the film can be enjoyable if so much of it is beyond the realm of reasonable understanding. Indeed, the biggest question to be had at the end is ‘why did I enjoy that so much?’ but you will be asking it. Its performance credentials can certainly not be in doubt and a lot of what carries you through the film is the charisma and appeal of the characters. Joaquin Phoenix as Doc Sportello is simply a fun protagonist, and though comparisons have been drawn out with The Big Lebowsky, Doc is quite different from The Dude. A stoner, yes, but not a cat’s paw – he’s proactive with flashes of brilliance when tackling cases. I have long been impressed with Phoenix’s chameleonic nature – he doesn’t even have to look that different from Commodus or Johnny Cash but somehow his characters never resemble one another.

In fact all of Inherent Vice’s cast, a smorgasbord of zany characters spawned in response to the hippie revolution, are all great to watch. Martin Short’s dentist is a particularly concentrated nugget of lunacy and Hong Chau as Jade certainly makes a rapidly hilarious impression. Alongside Doc though, the biggest presence in the film is his nadir Lt. Det. Christian ‘Bigfoot’ Bjornson, a hulking bruiser of a cop with a penchant for civil rights violations, unfulfilled acting ambitions, and the best frozen banana-sucking credentials ever committed to screen.

Look forward to subtitles on the DVD 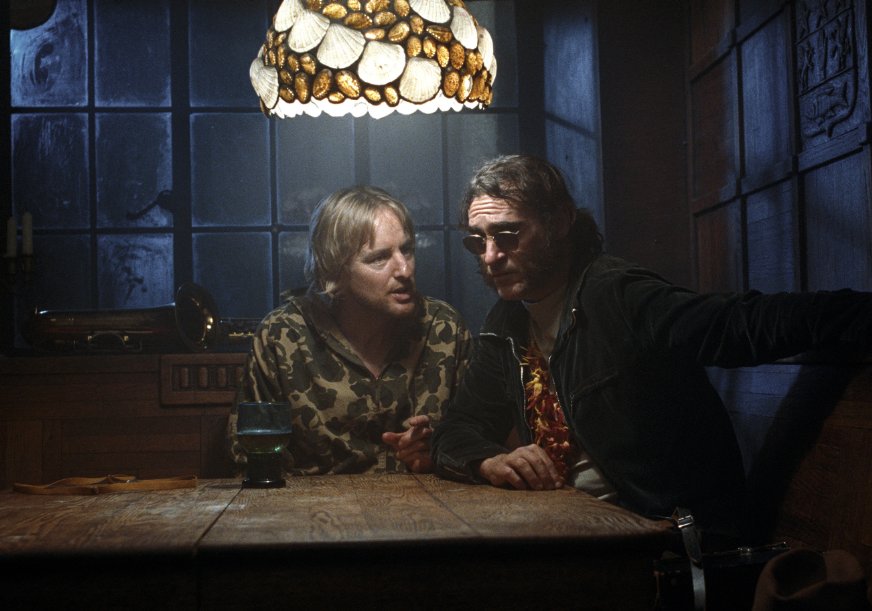 Though I might gush with praise for the cast, and the expert comedic timing that brings levity to the lunacy, the film does have a few issues. Rarely have I found a film urging me to scream ‘Enunciate!’ so often – one scene between Doc and Owen Wilson’s character is such a morass of garbled whispers that I gave up trying to listen. In an already hard-to-follow film, it can be frustrating to lose lines or sections of dialogue but in the end you’ll realise you won’t make much sense of events anyway. Still, look forward to subtitles on the DVD release which should alleviate the too-frequent mumbling.

As with all P T Anderson films, it isn’t easy to like but if you can meet it on its own terms it can be rewarding. Yes, characters mumble, it is a bit of shaggy dog story, and its tone can vary wildly between the giddy and the narcotically contemplative. But it is quite singular, very funny, utterly enthralling and liberates you from such earthly expectations as sense. Like the land developer Mickey Wolfmann, you’ll have a hell of a time even if it is going to see you land up in the loony bin.

Inherent Vice is available internationally on Blu-Ray and DVD on April 28th.

Previous: The Buried Giant by Kazuo Ishiguro
Next: Avengers: Age of Ultron – Too many superheroes, too little time