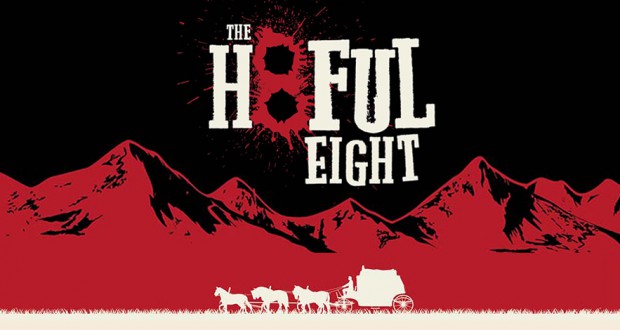 I’m often told that you either love or loathe Quentin Tarantino. I can’t say I have such a black and white experience with his filmography – there are many of his films I greatly enjoy, and others I find thoroughly disappointing. When he goes wrong it’s an incredibly frustrating experience as a viewer, knowing this man is brilliant and capable of more. So why does he make so many wrong turns? Who knows, but I’d hazard a guess that he is now too big to get properly reined in by peers.

The auteur’s eighth film brings with it Tarantino’s love of eclectic cinema once again – it is part western, part stage play, part locked-room thriller. And yet, it is also none of these things. Where expectations are set-up, they are often not followed through on – and not in a way that turns a convention on its head but simply a disappointing, unsatisfying conclusion. But, as always with QT’s films, my complaints are entirely story related. The Hateful Eight has a number of narrative issues but the acting, cinematography, set design, music (original score by Ennio Morricone!), etc are all impeccable.

One of them fellas is not what he says he is… 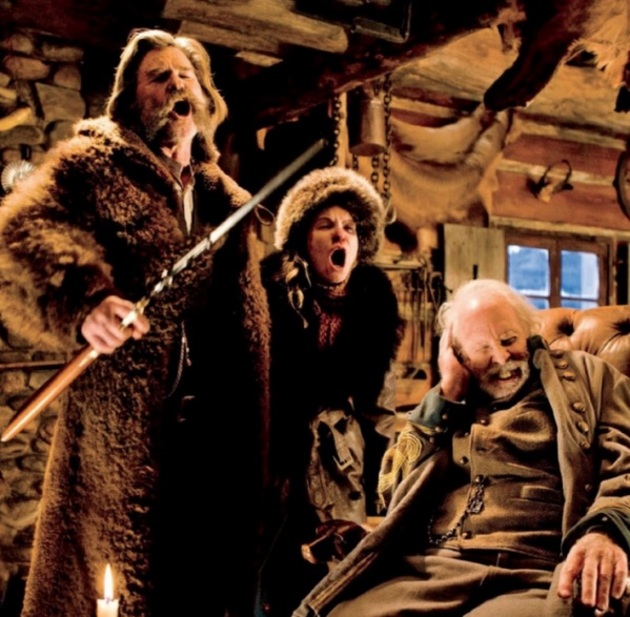 The Hateful Eight follows the bounty hunter John ‘The Hangman’ Ruth (Kurt Russell) as he transports his prisoner, one Daisy Domergue (Jennifer Jason Leigh) to Red Rock to collect the $10,000 price on her head. As the coach crosses Wyoming, a blizzard hits. Ruth and his driver O.B. (James Parks) happen upon two travellers stuck in the snow, Major Marquis Warren (Samuel L. Jackson), another bounty hunter, and the soon to be sworn in Sheriff of Red Rock, Chris Mannix (Walton Goggins). The five men make it to Minnie’s Haberdashery, a refuge for travellers even in good weather, in the nick of time.

Already paranoid about losing his bounty to Warren or Mannix, Ruth has further cause for concern once they reach Minnie’s. Minni and her husband are nowhere to be found and instead, they find a shady Mexican, Bob (Demián Bichir), the region’s hangman, Oswoldo (Tim Roth), a secretive cowboy (Michael Madsen), and an old Southern General (Bruce Dern). Certain at least one of these men is in league with Daisy, Ruth takes all the precautions he can as they wait out the storm. 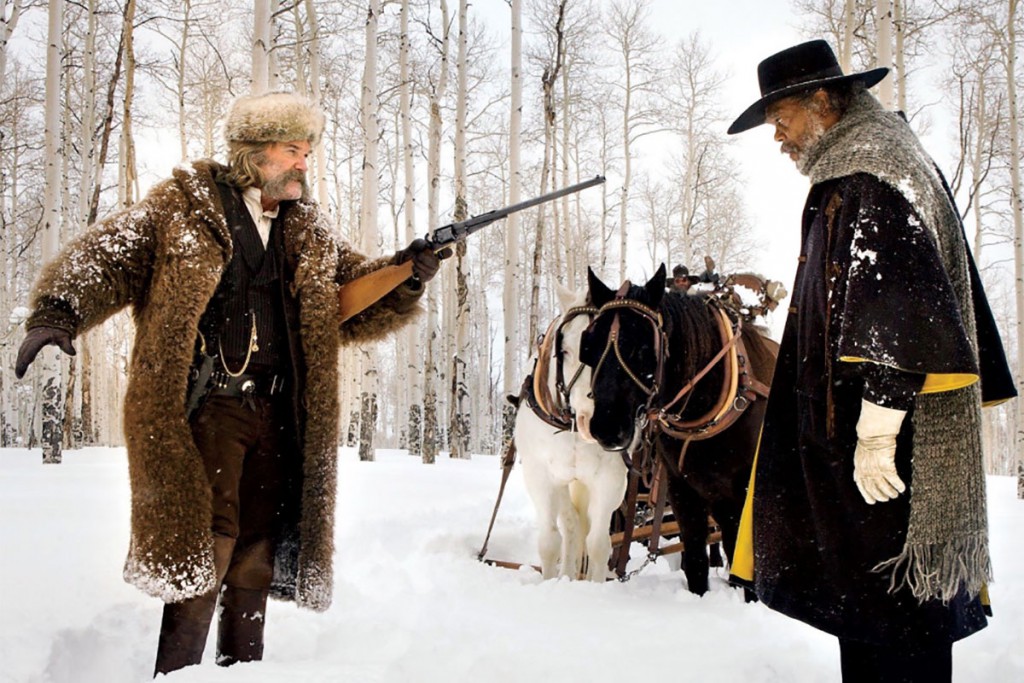 Tarantino films seem to get longer and longer each time. The Hateful Eight clocks in at over 3 hours, including an intermission. To its credit, it doesn’t feel like a three hours film, but it could – and should – have been shorter. For most of the film, Tarantino employs a standard linear type of storytelling that is thrown out for the last hour. This makes the two parts feel incredibly disjointed, throwing off the tone as well as destroying the tension levels that could have been built more effectively had he continued a linear, pressure cooker type story within the small haberdashery room. Instead, he takes everything that worked well in the first half and throws it out in favour of bizarre, experimental features that undercut the tension.

The film feels like it could easily be worked on stage: two main stage set-ups. One in the coach/wagon, heading towards the haberdashery, one at Minnie’s. The style of close-up conversation often works in stage plays to build tension and drive plot, just take my favourite John Hughes’ film as an example (The Breakfast Club). It feels particularly cinematic despite the stage-play narrative set-up through Tarantino’s use of beautiful landscape shots, with the Wyoming wilderness becoming a character itself. Too often the close-quarters nature of the set-up isn’t used to benefit the narrative and ultimately feels like a wasted opportunity. 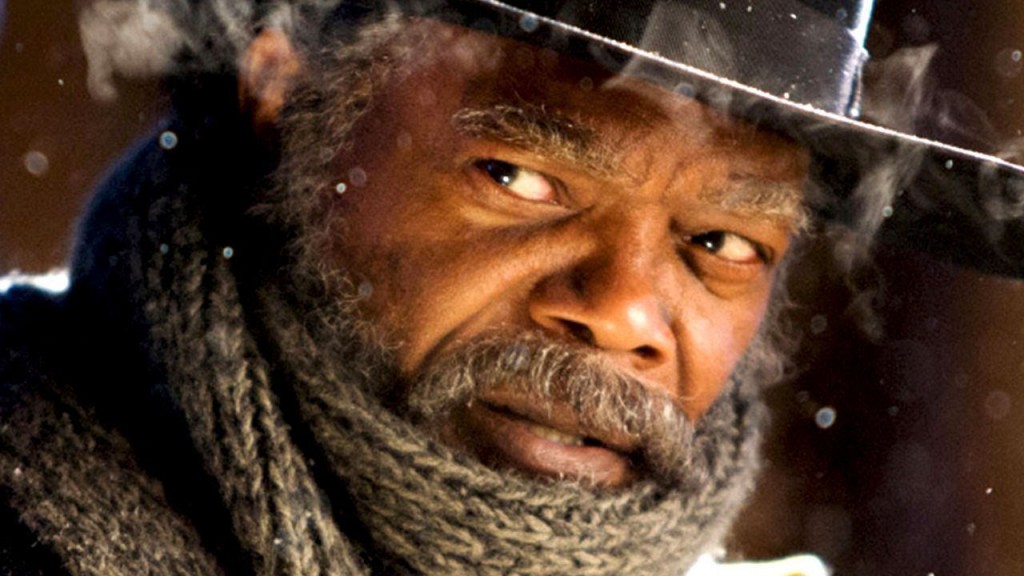 Tarantino builds the tension as each new character is introduced, upping John Ruth’s paranoia about his prize bounty as well as creating individual conflicts between each of the characters. Trouble is, there’s far too much loyalty for the tension to ever reach edge-of-your-seat heights. Since when has there been so much integrity amongst bounty hunters and gangs? Where was the double-crossing? Why were so many of the characters people of their word? Is it really so wrong of me to want to see these characters stuck in a small space and worried that EVERYONE might be out to get them? I should have been sweating from all the tension instead of wondering why he let the initial build-up dissipate.

The bounty hunter. The Hangman. The Confederate. The Sheriff. The Mexican. The little man. The cow puncher. The prisoner.

Watching any Tarantino film is like eavesdropping on an interesting conversation. It’s almost all exposition. All dialogue. There’s very little action – and when there is, it is very bloody violence (which I have no problem with, especially not with Tarantino as it is so stylized and extreme as to deliberately provoke a reaction in the audience). Listening to each of these characters talk and reveal the tiniest of tidbits about their personalities is truly fascinating. But unless the entire film is ‘A conversation between…’, I want a narrative with change and a resolution. 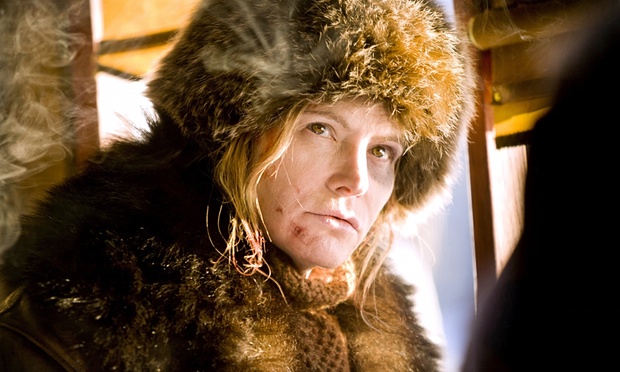 The Hateful Eight would have been a strong entry to most directors’ oeuvres, but Tarantino is capable of better. As such, his typically strong dialogue, the beautiful shots of the blizzard, the strong acting from each of his actors, none of it makes up for what the narrative lacks. Casting Jennifer Jason Leigh was an inspired choice – she can play almost any character and inhabits them entirely – but her strengths only highlighted areas of weakness, such as Michael Madsen’s phoned in performance. There’s enough to enjoy from QT’s 8th film, but he could have given us something better.

Verdict: A solid film from anyone else, The Hateful Eight lacks the narrative punch it promises with its opening. Powerful performances of a stellar cast and Tarantino’s usual skill aren’t enough to give the pay-off the audience deserves after sitting still for three hours.

Previous: Overused and unimaginative: The formula for YA dystopian novels
Next: We Have Always Lived in the Castle: I am going to put death in all their food and watch them die