Home / Film / Little Men: They’re taking it out on us 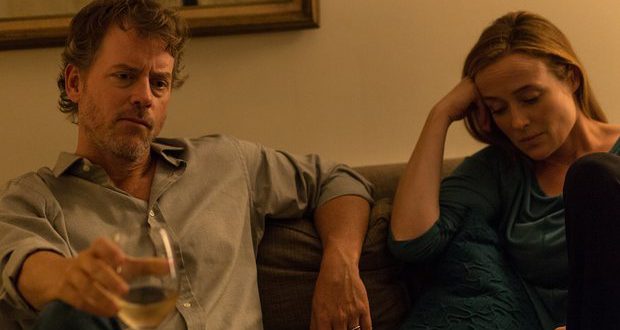 Little Men was a film I was eager to see. I’d enjoyed Ira Sachs’ previous film, Love is Strange, but had been frustrated by how abruptly and quickly it wrapped up. Despite its unreasonable brevity, the film had left me wanting more. Sachs is a filmmaker who is very concerned with the detail and intimacy of human relationships, which he combines with poised directing. I am thrilled to report that Little Men further cements Sachs’ reputation as a skillful director, and I don’t have to whinge about how short the film is this time.

The focus of the film is the friendship between Tony (Michael Barbieri) and Jake (Theo Taplitz), a couple of artistic young boys living in New Jersey. Jake’s family have just moved from the city into his grandfather’s old flat. Tony and his mother Leonor are the tenants in the shop beneath them. The film charts the social and cultural struggles of the two boys – Tony an aspiring actor, Jake an aspiring artist, both wanting to go to the LaGuardia arts school – as their parents become ever more fraught over a property feud.

The ongoing and topical financial struggles of the American middle class 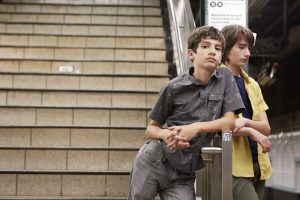 Sachs has an obsession with the struggling American middle class in his work. Well, based on this and Love is Strange, on the struggling middle class in and around Manhattan. These two films are riven with the inability of educated, culturally engaged people to make ends meet, or even secure a stable home. The reason Sachs makes this work is because these films are never dry lectures on social economics, you simply are shown the well-observed human consequences of these circumstances. Sacrifices are made, family’s wider social circles are put under strain, relationships frequently breakdown

The reason Little Men works is because all elements are utterly believable and the characters’ behaviour is always understandable even if it is callous or deplorable. You cheer on the two child leads who have a burgeoning relationship on realistic terms: they’ve got similar interests, want to go the same direction in life, and enjoy playing videogames together. Their bond however is not going to prove enough to surmount Leonore’s need to keep a hold of her store at a heavily discounted rent. Nor is it enough to dissuade Jake’s parents Brian and Kathy (Greg Kinnear and Jennifer Ehle) from seeing some returns on their property so they can live affordably and divert some money to Brian’s sister who otherwise sees nothing from her father’s will. 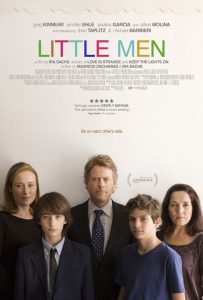 There’s more than cold monetary incentives to stop the parents becoming grasping monsters. Leonore might be the figure of sympathy for being the prospective evictee, but she is ruthless in exploiting her relationship with Brian’s dead father as a form of emotional leverage. Brian himself, a struggling actor, is deeply insecure about his wife having to support the family and will not relinquish this one opportunity to bring some money in for not just his wife and child, but his wider family as well. As with real relationships, all interactions are riven with pettiness, ulterior motives, and insecurity.

Given the focus on the children’s cultural growth, particularly Tony’s desire to act and the amusing acting lesson scene we see arising from this, it seems perfectly clear to me that Sachs can be dubbed an ‘actor’s director’. I can and probably should rant about the casual delicacy with which he frames shots, the evocative but subtle gradations of lighting, or even the stylish but unobtrusive editing; but frankly if Little Men didn’t have incredibly strong performances with a very nuanced script, it would have fallen apart immediately. Sachs is able to deliver these from a very capable cast and a great film is built on these foundations.