Home / Film / Ghost in the Shell: Maybe next time you can design me better 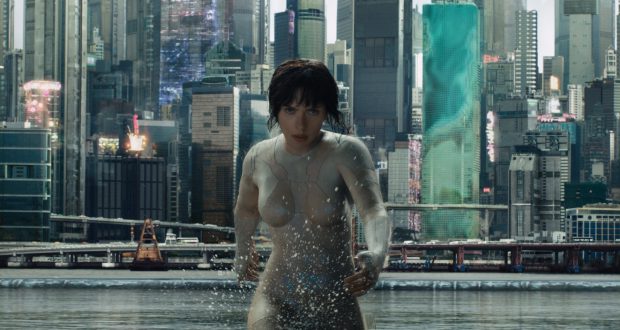 This adaptation was never going to get an easy ride from me. Ghost in the Shell (2017) is based on one of my favourite manga and anime series, in particular the 1995 film of the same name. The production has been plagued with controversy over its whitewashing of the Japanese protagonist Major Motoko Kusanagi, here played by Scarlett Johansson as Major Mira Killian. Worry was also expressed that the notoriously cerebral (at times, even obscure) work would be dumbed down in traditional Hollywood fashion.

There’s a lot to unpack here. I did not like Ghost in the Shell (2017) but a lot of that is bound up in my adoration of the original material. Most viewers will come to this fresh and have no prior investment in the legacy, and could well be unaware of the whitewashing issue. For those viewers, this will be a vaguely competent action film whose only defining features are some interesting visuals and a solid soundtrack by Clint Mansell and Lorne Balfe. The story beats are predictable and the characters not that compelling. I’ve seen far less competent films in my time though I can’t see this capturing anyone’s imagination. But we should not ignore the context.

The most memorable aspects of the film are its controversies 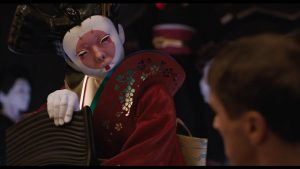 Let’s tackle race first. I’ve seen a few apologies or excuses for the film already. Most are nonsensical, some make some good points about how cosmopolitan the new film and its setting are. The cast is a hodge-podge of American, Japanese, Singaporean, French, English and Danish actors. The city is overtly styled after an Asian metropolis which has no restriction on containing diverse characters and inhabitants. But none of that changes the fact that the protagonist of the original is a Japanese woman and the studio decided that once more it was important to cast a big name Caucasian actress. Worse still (and slight spoiler if you haven’t seen the trailer), the plot revolves around discovering the Major’s stolen identity in an ill-judged attempt to reconcile this decision in the narrative. The movie condemns the bad guys for obliterating the Japanese identity of a young woman to build a cyborg who is ostensibly white. I’m sure the writers were well-intentioned and thought they were being clever in addressing the issue, but if your story-making decisions align you with cartoonish bad guys, you are making some pretty stupid decisions.

As much as the white-washing does bug me, and feel free to lambast me for my priorities, what annoyed me more was just how coarse and bland everything had become in translation for an American audience. The characters I know so well are now flat archetypes. The Major was once a self-assured and ruthlessly dedicated law enforcer who was able to address some dense issues about the nature of living in a digital world. Whilst all the characters are fairly flat (excepting maybe Takeshi Kitano’s altogether too brief turn as Daisuke Aramaki), the Major has suffered the most. Now she is insecure, undisciplined, and doesn’t respond well to authority figures. Oh, the originality is killing me… 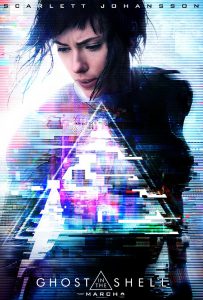 All the most interesting elements of the film, from individual shots to action sequences, are taken from previous iterations of Ghost in the Shell and are done worse here. Some elements seem to be included as cynical homages intended to please established fans but then don’t feel like they were the most fitting development for the plot of this new film. I do wonder if newcomers will wonder why the plot jumps to certain segments which seem to be largely justified in providing these nods to the older material.

The film would be much better off if it simply admitted it didn’t have the intellectual chops of the original too. To its credit, Ghost in the Shell (2017) does not indulge in shallow pop philosophy that often but, when it does, the writers show a poor understanding of the issues they address. Despite its best hamfisted efforts, I don’t think this movie has anything insightful to say about the impermanence of identity in a digital world and it ends up being quite technophobic in a way that does not gel with the setting. It’s a confused thematic element that does little to aid a movie struggling to establish any distinction in its characters or story.

Considering how much I venerate the 1995 film, this could have been a lot worse. Ghost in the Shell (2017) is not a cinematic atrocity. It is just a template conspiracy-action film that has been daubed in the paint of an anime that I really like. It does what Hollywood does best: takes an interesting and intelligent foreign work, then makes it more boring, more stupid and more white. It really doesn’t justify its existence.

Verdict: On its own merits, a bit disjointed and disposable but with a good soundtrack. Taken with all the baggage though, this film really didn’t need to get made and you shouldn’t patronise it.