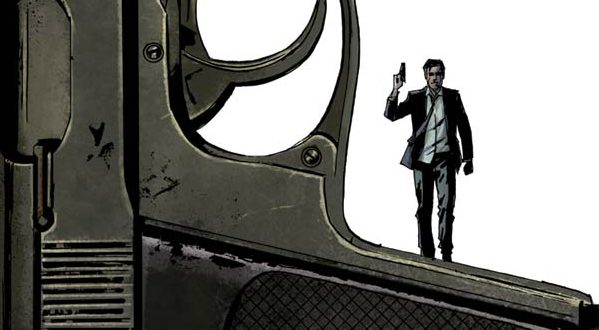 Eidolon is the second volume of Warren Ellis and Jason Masters’ take on the iconic James Bond in comic book form. Perhaps I expected too much, being a long time Ellis fan (and avid reader of his weekly newsletter, Orbital Operations, which I highly recommend), but I was left with one question at the end of reading the latest Bond adventure: was there any need for it?

I know, I know, Bond has always been a self-indulgent franchise, a real guilty pleasure. That doesn’t mean, however, that new entries shouldn’t bother to at least try to earn their keep. Eidolon gives us nothing we haven’t seen before from either the Bond franchise or other generic action spy thrillers. There’s nothing particularly thrilling about it either. Just… just… Warren… what was the point?

‘People can be confused, and people can lie, but the money always tells the true story.’

I admit that I’ve never gone for comics that were too heavy on the ‘action’ over plot or interesting characters (so most of the ‘classic’ superhero comics – dull, dull, dull!), so it is possible that my disinterest in Eidolon is born of a previously established prejudice… At least Ellis lets Masters’ art do the talking as the action rolls out over several silent pages. In this way, the comic uses the visual aspect of its medium to its credit. As such, it is a shame that the art otherwise lets us down, being as dull and leaving as little of an impression as the lackluster story.

Props to the creators for the most inventive moment of the entire volume, with an ingenious use of ‘show don’t tell’. Most of us should know by now that Bond is an exceptional shot, but just in case you weren’t in the know, Masters and Ellis provide us with an anatomical diagram to show the exact location Bond is aiming for and the trajectory of the bullet. It’s neat and quick, giving us the information regarding his skill without an info dump. Nicely done.

‘Huh. Really thought I got all the blood out from my nails.’

So what about the story? Agents can’t trust their own agencies, what next?! It reads like an even less interesting version of Hydra vs SHIELD in the Marvel universe. The volume follows the work of a sleeper cell of Spectre agents within MI5, finally making their move. And like many baddies before them, they are woefully incompetent and easily outmaneuvered.

Unsurprisingly, the titular character is the volume’s biggest problem and I’m not talking about his ability to turn on every woman everywhere. He is entirely superfluous to the plot. There are plenty of female characters who have agency – they have a reason to be there and make logical, informed decisions. But James Bond feels like less than a footnote. You could cut him from the story entirely and still have the narrative intact. Now that right there is a big problem for a supposed James Bond entry.

Moneypenny continues to reign supreme as the best thing about the Bond franchise and it’s nice to see the comics embracing diversity. But these positives are hardly enough to dig Eidolon out of the hole of its own making.

‘You’re going to leave a loaded gun in a bin?’

‘It’s America. I don’t have time to give it to a child or a mentally ill person so I’m leaving it in a bin for them to find.’

Previous: Give It A Name: Self-Identification In 2017
Next: The Bear and the Serpent by Adrian Tchaikovsky