Home / Film / Valerian and the City of a Thousand Planets: Ugh… 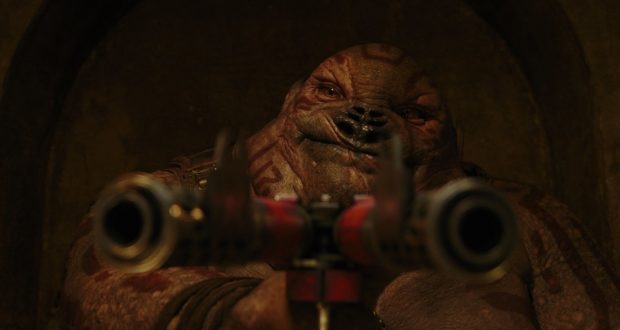 Luc Besson can be a punishing director to follow. He has undoubtedly made some great films but one imagines his career will be defined by distinct eras of quality. Valerian and the City of a Thousand Planets falls firmly in his ‘lacklustre’ later era. It is an utter mess that wantonly disregards the basics of storytelling and character establishment. The origins of this Valerian film are rather circular. As a film, it draws on Besson’s earlier The Fifth Element to which it cannot raise a candle, but that was itself influenced by the Valerian and Laureline comics which are being adapted here.

This production will end up being rather tragic. Not only does this endeavour fail to adapt an acclaimed and influential comic series that ran from the late 60s to 2010, but it is also the most expensive European and independent film ever made. Its artistic and commercial failure will make financing major productions outside of the American studio system difficult.

Christ, what an awful title… 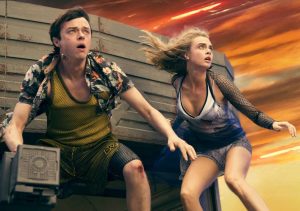 Viewers might at first wonder what I am talking about. The opening sequence follows an idyllic scene on an otherworldly beach. Once the eyes settle into the garish colour palette, you can see the design and care put into the setting. You may well become invested in the little narrative being established. You might even question my critical abilities. Then the main plot will arrive with a deafening crash and the problems will start.

I don’t wish to blame the actors too much because you couldn’t polish this turd of a script, but our two leads are utterly abysmal. In particular, Dane DeHaan’s Valerian is an obnoxious ass, though you would struggle to identify many traits in Cara Delevingne’s Laureline. Besson breaks the golden rule of good character work. Rather than show us the characters in action to demonstrate their traits, he has them list their (completely unsubstantiated) virtues to each other. All that they do actually demonstrate on camera is a startling lack of charm. 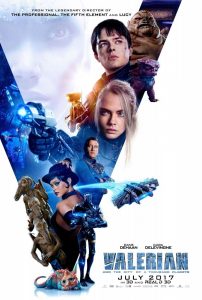 The plot is a non-starter. The overarching mystery is bland, predictable, and carried through by contrivance. Worse, the ‘plot’ is repeatedly interrupted by episodic obstacles, the solution to which always happens to be conveniently adjacent to the problem. Supporting characters who are solely defined by gimmicks enter briefly but their departure is treated with an emotional significance that has not been earned. Valerian and the City of a Thousand Planets reeks of not being thought through – surprising, given that Besson is meant to have rewritten the script extensively to ‘perfect’ it. Honestly, the ‘and then this happened…’ story could have been written by a dim six-year-old.

I don’t want to rail on it too hard because there are elements to praise. The focus on actual sets and physical costumes is something lacking in a lot of modern science fiction films where there is a reliance on flabby CGI. Some shots clearly draw on the comic books’ panels and are very well-composed. The designs are clashing and bright but were executed with a lot of care. This attention to the craft of world-building makes the utter lack of character and plot all the more detestable. If you were able to work so hard to make your sets and costumes, you should be able to make a film with a story. As it is, Valerian and the City of the Thousand Planets arrives on screen as a lumpen mess.

Verdict: Incompetent and obnoxious, Valerian was taken out of the oven too soon.

Previous: The art of the trailer: Misleading the audience
Next: Nostalgic Impulse: Tank Girl