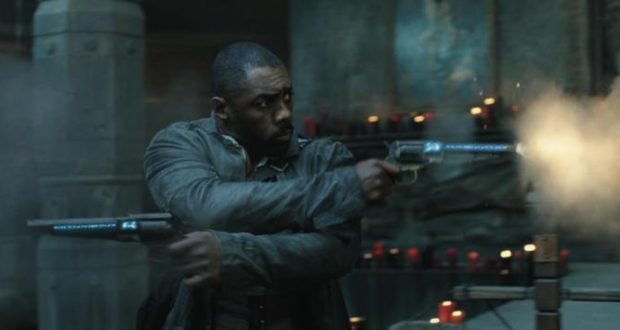 The man in black fled across the desert, and the gunslinger followed.

So begins the sprawling interdimensional adventure series The Dark Tower, written by Stephen King. This dauntingly large story from one of the most successful mainstream authors of our time has now been adapted into a feature film. This folds into a nostalgic craze for King’s work, with shows drawing on the tone of some of his adaptations – chiefly Stranger Things – and even a new rendition of It coming out soon. The Dark Tower is a bit of a different beast though. The author regards it as his magnum opus and it’s a genre-hopping fantasy series rather than his better-known horror work. And in this instance, the film version is an utter bloody mess.

The Dark Tower film does not adapt a particular book within the series. I gather it in fact serves as a sequel to the books, involving some sort of convoluted time loop plot, and is therefore free to hodge-podge elements from across the property into a new jumping-on point. And this does indeed feel cobbled together. Disparate concepts smash on top of each other with little order, sense, or explanation. Frequently elements are introduced and resolved with little actual impact to the proceedings. It is as if the film-makers thought it would be a good idea to populate the film with references to the obscure and dense internal mythology of this series rather than a plot.

The Dark Tower might be a turd but as far as messy bowel movements go, it is at least brief

These issues are compounded by the most notable feature of The Dark Tower: its running time. The film is a slender 95 minutes long. As such there is little time to establish this aggressively esoteric setting, let alone the characters or plot. Worse still, what little time the film has is wasted. The opening text explains that the Dark Tower is some sort of dimensional nexus that can be potentially destroyed by the imagination of a child (because…?). This information is reiterated to us several times, including within 5 minutes of the opening text. Utterly confused and redundant. However, the running time is a blessing in another sense. I have been to many bad films that simply refused to end at a polite and convenient point when their lack of merit was well in evidence. I wholeheartedly appreciate someone deciding that this hatchet-job need not waste too much of our time. If there’s one thing worse than being bad, it is being interminable.

The use of the characters raises questions too. In the books, the main character is Roland – the eponymous Gunslinger of the first volume. Here he is played by Idris Elba (a rather progressive choice because the character in the books is white), but is reduced to a rather tardily-introduced supporting character. Our protagonist is now point-of-view character and arbitrary magical boy Jake Chambers (Tom Taylor) who ostensibly acts as a surrogate for the audience to acclimatise to the world-hopping adventures. Except that concepts are rarely explained directly to him and never to a satisfying degree so the need for such a bland focal figure to have the plot explained to them is absent. Then we come to Matthew McConaughey’s Man in Black… The actor seems dedicated to continue squandering the goodwill that some of his acclaimed performances have garnered him in recent years. Suffice to say, he is a less than stellar villain.

I can’t work out who this for. Newcomers will be bored, and established fans will be galled 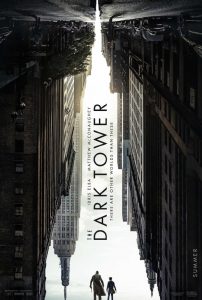 It might be unfair to blame all the film’s problems on the film itself. I have read the first volume of the book series, The Gunslinger, and found it a bland and disjointed affair with little in the way of character, juvenile posturing towards mature content, and bullshit macho mantras about ‘being a man’. Not having continued with the series, I can’t claim this to be an endemic problem with the source material, but it’s very much the case here. I could well believe the fault does lie solely with the film-makers though. This is, as I said, an original plot within the Dark Tower canon and the fact that oblique internal references are used as a substitute for plot and character is squarely on the film-makers’ shoulders.

And if nothing else, even if you script is awful, your world-building broken, and your characters flat, you could at least edit the thing properly. The action scenes are jumpy and skittish and have a bad habit of cutting around the gunshots. Did I mention our supporting action hero is a legendary gunslinger and the true protagonist of the series? The director and editor seem to hold this property in contempt as they wilfully hamstring its key elements. The gunfights are shot in such a way as to dismiss and de-emphasise the impact of each and every shot. My crusade against sloppy editing might be an old bugbear on the site by now, but I can think of no better recent example for how sloppy transitions and cuts can undermine what are otherwise technically proficient sequences. Is a little professionalism too much to ask?

Verdict: The Dark Tower is boring, badly made, badly written, and badly edited. It is short though…

Shadows of Self by Brandon Sanderson: Stop talking to your hat and get over here.
book series dimensions Fantasy Idris Elba It Matthew McConaughey Stephen King Stranger Things The Dark Tower The Gunslinger western 2017-09-07
Fenton Coulthurst

Previous: Detroit: It’s a war zone out there
Next: The Limehouse Golem: Madness has its own logic