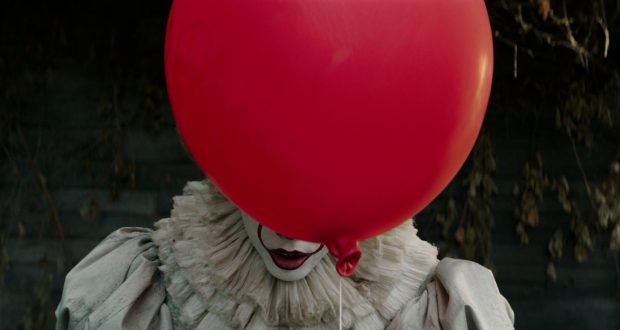 I seem to be getting a healthy dose of Stephen King this year. Now we come to the considerably more anticipated adaptation of 2017’s offerings, It. As with the execrable Dark Tower, I have a passing knowledge of the property but have not read the book – nor in this instance seen the mini-series starring Tim Curry. It appears to be a fan favourite in the King canon and I can certainly see its appeal based on this film though I have some reservations. Like everyone else who has read around slightly, I know the book features an underage orgy sequence which is thankfully absent from the film. But my reservations are less about book passages which I have not read, and more simply about one key element that does not gel: my god does Pennywise suck!

Let’s be clear on this. Based on this new film version of It, I cannot fathom the appeal of Pennywise – the demonic shape-shifting clown that the title refers to – nor his status as an iconic villain. This has nothing to do with Bill Skarsgård’s performance per se, but the clown is so ineffectual. This is meant to be a supremely evil entity dedicated to devouring terrified children with a host of otherworldly powers to facilitate this. Pennywise’s batting average seems hilariously low in the film. Most of his successful kills are reported and not seen. Those attacks we do see are against the protagonists and are unilaterally ineffectual. Roald Dahl needs to teach King and the director a thing or two about reliably disposing of children in grisly ways.

I’ll give it this, It shows few inhibitions about showing graphically maimed children 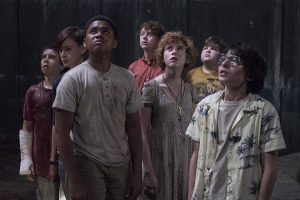 It all gets a touch repetitious. Pennywise turns up in some form, terrifies the child, chases it and then one of two things happen: the child runs away or Pennywise grabs the child briefly, before it runs away. Oh, the terror… And this may seem churlish, but why is the clown terrifying the children? I get that he feeds on fear as well as children’s flesh but surely (if he is having so much trouble catching the blighters) it would make more sense to use his shapeshifting to lure the children in, kidnap them, and then scare them mercilessly before chowing down. How am I meant to respect, let alone fear, a monster who is so amateurish at murdering children?

This isn’t helped by the fact that Pennywise is largely restricted to jump scares. It’s not wholly the case and the film does much better with the character when it relies on his malevolent presence or some weird imagery – the deformed woman from the painting is well done. Nevertheless, for the most part Pennywise is a generic and not particularly memorable jump scare villain who doesn’t stand out from the host of those that now exist. Far better, in fact are the series of domestic terrors that the child protagonists have to deal with. Between a negligent community, abusive parents, and vicious bullies, the overhanging threats in the town of Derry are far more varied and evocative than the demon clown. In these cases, the filmmakers rely on lingering threat, the atmosphere of trauma and some very brutally realised violence. These are far more compelling elements for the characters to respond to. 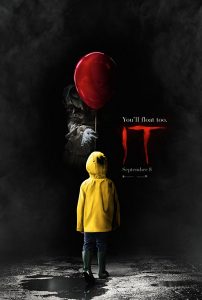 And they are unequivocally the best feature here. The main characters are very engaging and you quickly become invested in them and their tribulations. I have often lamented the leeway given to child actors on screen but here we see the results of having some standards. The Losers, as this band of plucky misfits are known, are an endearing group who the audience can quickly sympathise with and root for. It is by most measures a well-shot and well-assembled film but it’s central appeal ultimately comes down to the tribulations of a bunch of nervous skinny dweebs facing down bullies, hanging out, getting crushes on each other, and generally dealing with staple pre-teen hijinx.

The sorry truth is that it actually becomes more irritating than scary when Pennywise shows up. Why must we interrupt this more than serviceable high school drama to make room for some post-Paranormal Activity quiet-quiet-BOOM nonsense? In several cases, it just feels like we have a Pennywise sequence because we haven’t had one for a while. He’s desperately clawing back screen time because better characters are forcing him out. I would say my impression of the film is majoritively positive but as you can see, there are hurdles to overcome. Pennywise aside, this film is unduly long (not surprising given the doorstopper size of the book) and the end sequence confrontation is noticeably protracted. If you can stomach that, then there is ample material to like here, behind its facade of being a kiddy slasher flick.

Previous: Binge watching: The IT Crowd
Next: Mother!: I wanna build a paradise