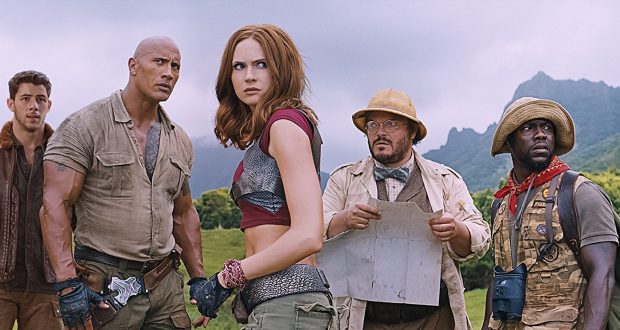 Jumanji: Welcome to the Jungle feels like the first draft of a film. It is slight, underdeveloped, and transparently written to a template. This has clearly been created to cash-in on the recognition of the property (do kids today even know about the original Jumanji?) and the ticks-all-the-demographic-boxes appeal of its main cast. The fact that the film was released in that brief period where something might carve out a few million dollars before Star Wars speaks to the rushed and not especially confident financial strategy of this endeavour.

The premise is not a huge departure from the original. The mystical board game is unearthed not long after being dispatched at the end of Jumanji and transforms into a video game cartridge to better lure in unsuspecting children. Twenty years later, we reach present day where a ragtag bunch of high schoolers find the game in the school store room whilst trapped in detention. Transported into the world of Jumanji, the teenagers are trapped in the bodies of the player characters and must complete the game to return home. 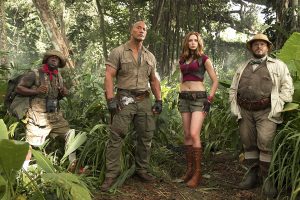 The worst aspects are the underboiled character arcs. The protagonists each have some bland flaw or social anxiety to overcome which is not only depicted but verbally spelled out at the start. There’s no surprise that they will have to overcome these and learn to be better people as they proceed through the game but the patronising bluntness with which this is delivered beggars belief. Worse still the resolution is arbitrary and unearned. The two girls Bethany and Martha, for example, resolve their differences and essential nullify their development within their first proper conversation. Despite the fact that these characters have their arcs run through before we reach the halfway mark, the character Fridge never actually confronts the issue that he is an aloof bully who doesn’t take responsibility for his actions. This is just badly organised.

Jumanji: Welcome to the Jungle also has a supremely dated view of video game culture and gamers which severely hampers the film. Given the presumed audience is going to be highly video game literate, I don’t know why concepts like levels and lives need to be so dutifully elaborated on. Most egregiously, the film depicts only the stereotypical reclusive nerd as remotely familiar or capable with video games. This is 2017, I think we have moved beyond the idea that only reclusive socially maladroit boys like video games.

Where is the sense of grizzly relish at imperilling children that the first one had? 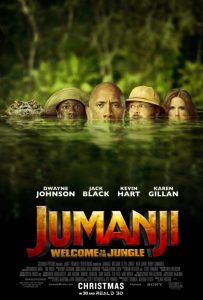 Compared to the original film, which I remember fondly, this new instalment also lacks bite and much of a consistent aesthetic. Reviews of the original Jumanji chastised its dark and menacing content relative to its young audience. I relish those twisted overtones. Welcome to the Jungle is much more frivolous and chipper with a lot of the distinctive threat sanded off. The sinister tone of the original also dovetailed with its well-executed world-building as the dark jungle full of ravenous lions, deadly plants, quicksand, and Freudian big game hunters invaded reality. Here, we get some characters that harken back to that very loosely, but overlaid with clashing modern musical accompaniment, bizarre heavy metal bikers, and crashing around in helicopters. Little about the setting, the main appeal of the film, is thought through.

Despite this, I genuinely think this concept has legs. The execution is WAY off here but I do think you could make an entertaining film that deconstructed the tropes of video games in this fashion. You could give the characters more than two dimensions, harmonise the setting so it has more of the creepy dark and dangerous jungle vibe of the original, create a real sense of threat and trim out the goofy humour. You wouldn’t even need to recast. Bland as the characters are, it’s not really the actors’ fault and they seem to be putting in some effort, to their credit. There might be a kernel of a good film here, but as it is Jumanji: Welcome to the Jungle is simply undercooked.

Verdict: Clearly rushed to screens, the new Jumanji is inoffensive but inconsequential. Quite short though.

Previous: Firestorm by Lucy Hounsom: Exclusive extract
Next: A Cult of Deception: Romance in Hollywood