Home / Film / Horns: The devil has claimed you! 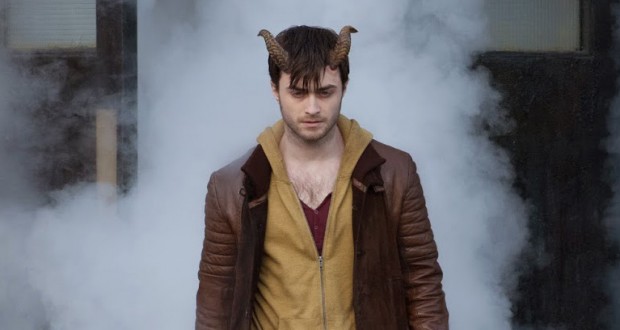 Every now and then a film comes along with an original idea (yes, ignoring the fact that it was an adaptation of a book for now). Hollywood is a sausage factory of samey films, with studios apprehensive of taking risks on films that enter unknown territory. Unfortunately for them, what worked before might have just reached the saturation point. Eventually, more of the same bores even the least imaginative viewers. So when I first saw the trailer for Horns months ago, I was very excited. 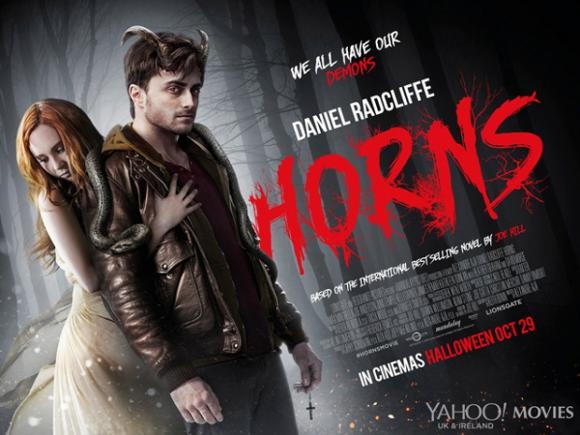 Horns is based on a novel by Joe Hill. I’ve never read the novel, or any of Hill’s novels, though I absolutely love his incredible comic series, Locke & Key. Hill is also the son of Stephen King, so his work in the mystery and horror genres are always compared to his old man. Lucky for him, I’ve also never read any King, so I can’t be biased in that way. From what I’ve read, the film is not a faithful adaptation, but the core concept remains untouched.

Ig Perrish’s (Daniel Radcliffe) girlfriend Merrin (Juno Temple) has been murdered and everyone in town thinks he did it. After one night of heavy drinking and wallowing in self-pity, Ig wakes to find horns growing from his head. He doesn’t know what’s worse – that people don’t seem bothered by the fact he now has horns or that they start revealing their deepest, darkest secrets to him.

At first, Ig despairs at being punished for something he didn’t do, before realizing the power the horns give him can be used to find Merrin’s real killer. Ig moves into moral grey territory as he compels those in town to open up to him, so that he may avenge Merrin’s death. 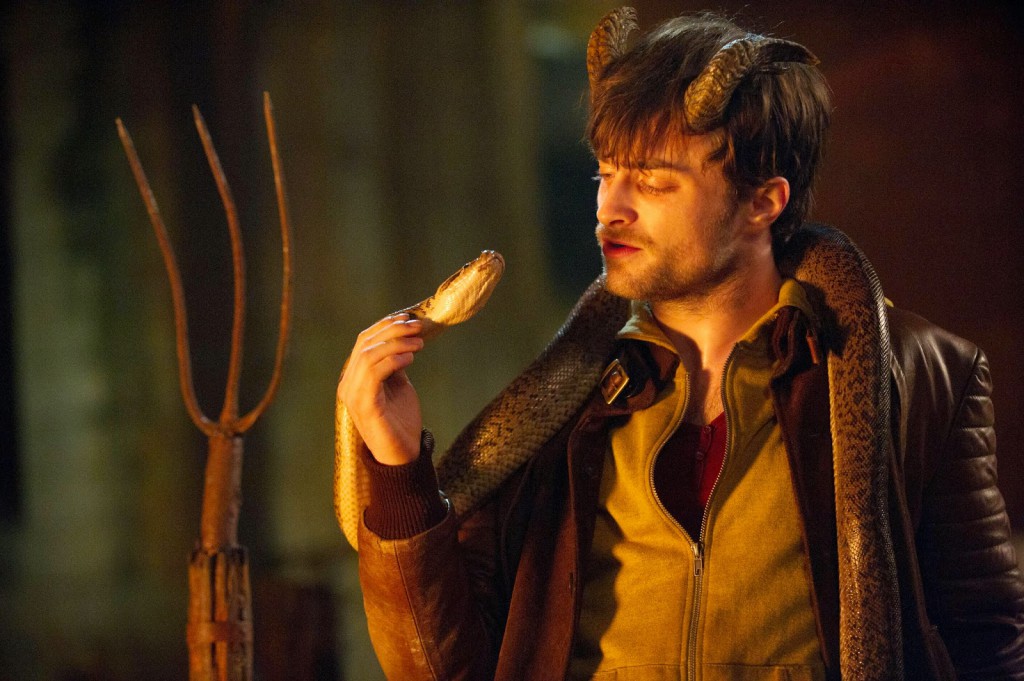 Much of Horns calls to mind Fay Weldon’s 1983 novel, The Life and Loves of a She-Devil. The overall narrative takes the form of a revenge tragedy, obviously with elements of fantasy (or heavy metaphor, you can never quite be sure). But the transformative element is key to the story. It is through Ig’s transformation – represented physically by the growth of his horns and emotionally/psychically by a growing understanding of the world around him – that he is able to avenge Merrin’s death. But like any act of revenge, it is not an act that will leave him unscathed. The necessity for revenge is not questioned, though it is acknowledged that crossing that line is something he will never come back from.

The story also has the potential as a tale of the unreliable narrator. The narrative is so heavily steeped in metaphor, particularly religious, it is never clear if any of what is presented is real. It may all be a manifestation of a disturbed mind – a mind trying to process an unspeakable tragedy. Perhaps some of it is real, that Ig does manage to track down the killer, but he does it on his own merits and not with the help of any supernatural devilish abilities. But the beauty of the story is that it doesn’t actually matter. Whether or not it is real, it feels real to Ig and therefore to the audience, and we happily buy into it.

The film is directed by Alexandre Aja who is known for such ‘classics’ as Piranha 3D and The Hills Have Eyes. I’m not going to lie, those standard horror films that could easily be exactly the same film most of the time, do nothing for me. So I was pleasantly surprised at his direction of Horns. While at times the film is incredibly creepy and disturbing, it never falls back on cheap thrills. The cinematography used is absolutely stunning, complemented by sets and locations where nature is reclaiming the human world. The juxtaposition of the beautiful scenery with the cruel behaviour exhibited by almost everyone in town is chilling. The drug trip experienced by Terry (Joe Anderson), Ig’s brother, is one of the best drug hallucination sequences I’ve seen on film. 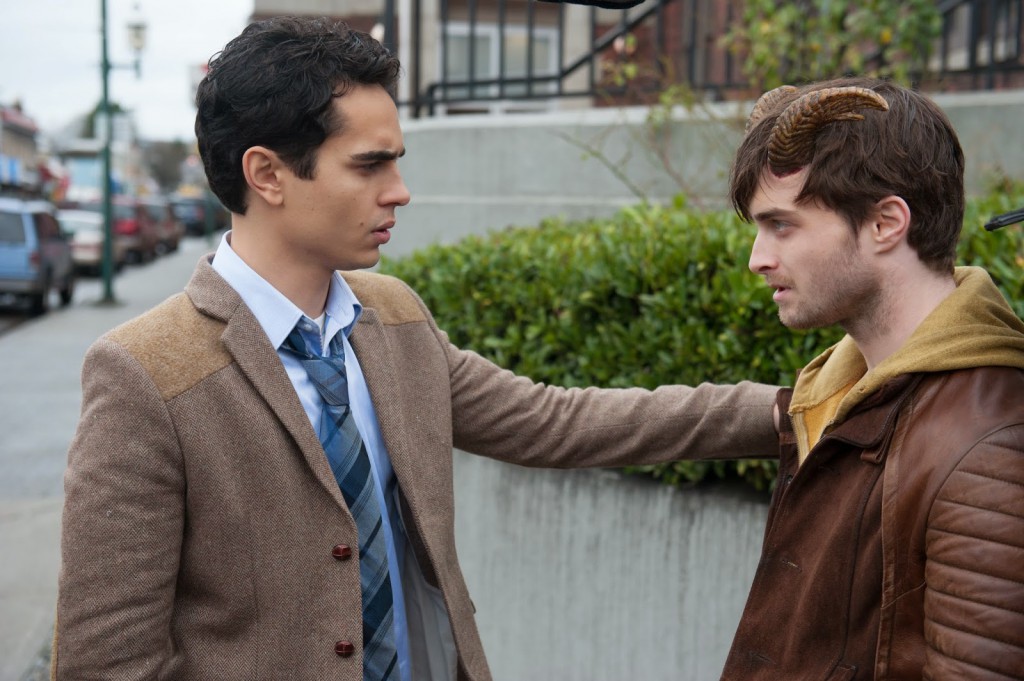 Daniel Radcliffe, like many successful child actors, is forever going to be remembered by his iconic childhood role. For me, that means thinking of him pulling a face, trying really hard ‘to act’ in Chamber of Secrets when he first meets Dobby in his room. That was the epitome of awful child acting. But his choices as an adult actor, more interested in interesting independent films than taking part in big blockbusters, has done a lot to redeem him in my eyes.

In Horns, Radcliffe shows that he has well and truly outgrown the wooden acting of his childhood. He can act and he does a fantastic job as Ig. He is at his best when he is playing the part of the mischievous devil, relishing in his ability to suggest behaviour to others to the point of coercion. Exploring the troubled, darker aspects of his character is where he shines; walking that moral grey line with skill, being both dark enough to scare and likeable enough to keep the audience well and truly on his side throughout. 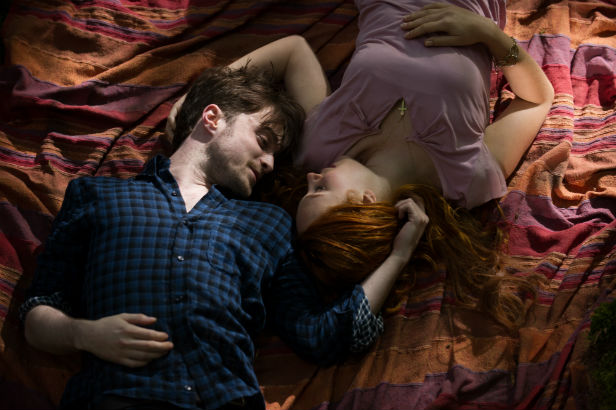 The supporting cast in the film is also excellent. Unfortunately, Juno Temple as Merrin is sadly underused. But she does manage to pull off the part as the idealized girl, worshipped by many (something that I felt wasn’t managed by Mary Elizabeth Winstead as Ramona Flowers in a similar role for Scott Pilgrim vs. The World). The other standout for me was Joe Anderson. His strung out, tortured portrayal of Ig’s musician brother was a scene stealer. Meanwhile, though Kelli Garner’s character Glenna was fairly stereotypical and uni-dimensional, it was nice to see her playing something a bit grittier, as I always see her as such a sweet, innocent creature, as she plays in Lars and the Real Girl.

While it begins strongly, the film trips over towards the end. A common problem in films, limited by a finite running time, there is not enough time to give the ‘villain’ adequate characterization so that they don’t end up being a caricature of evil. Also, the sense of betrayal that would be felt by Ig in that scenario isn’t adequately represented on screen (which is no fault of Daniel Radcliffe’s, but an issue with the script). Where the rest of the film relied on dark humour, suspense, and a percolating, bubbling of creepy thrills, the end goes for a more straight-on horror approach. While it might not necessarily be a bad thing, it loses some of the emotional significance.

Verdict: Refreshingly different premise for a film, that doesn’t shy away from taking risks. Often surprising, very funny, and a dark but insightful view of human nature, the film is thoroughly enjoyable. Certainly not perfect, with a disappointing ending, it is worth watching.

Previous: Nightcrawler: If it bleeds, it leads…
Next: Something Wicked This Way Comes: Don’t talk to death!