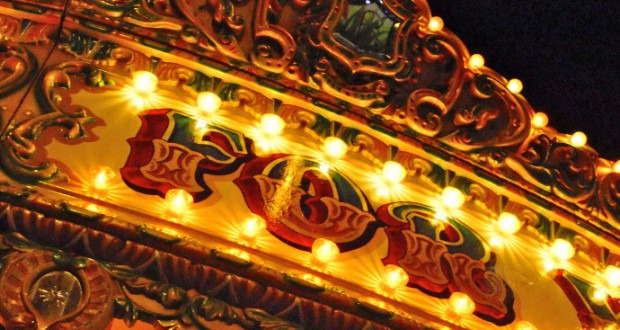 I first read Ray Bradbury back when I was in university. I had just discovered the brilliance of novels like 1984 and Brave New World, so a literary-minded friend recommended Fahrenheit 451 to me. At the time, I knew of Bradbury through my father, a long-time fan of science fiction short stories, though I had never sat down and read any of it myself. Being probably his most well-known and beloved work, I thoughtFahrenheit 451 was as good a place to start as any. I loved the idea of the novel and the world he created, but I found his prose style tedious. As a result, I didn’t attempt to read any more of his work. Until now, that is.

After reading (and totally loving, by the way) Locke & Key, by horror writer Joe Hill, I thought I might try giving the horror genre a go. I tend to find new forays into a genre easier when I take up a classic – something that has stood the test of time within its genre. When I came across Something Wicked This Way Comes, I thought it was the perfect in-road. Sure, I hadn’t been blown away by other Bradbury efforts, but Fahrenheit 451 – the premise at least – has stuck with me for a long time. And the premise of his best known long format horror also sounded very intriguing. Unfortunately, once again Bradbury let down his marvelous idea. It could have been so much more, or perhaps the ‘more’ was the issue – it would have made a very strong short story, but a novel? 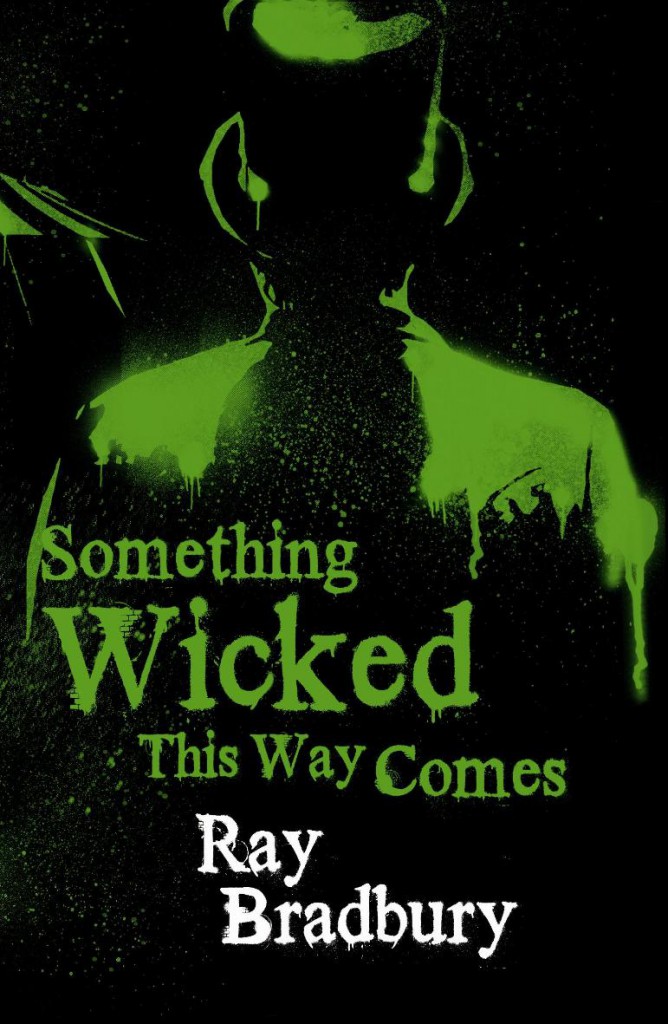 Will Holloway and Jim Nightshade are best friends and neighbours. Long after summer has been and gone, a carnival arrives in their sleepy town. The boys, along with most of the town, are excited by the entertainers’ arrival, welcoming the weird and wondrous acts. Will’s father Charles, the local library janitor, does not have such a good feeling about the coming events.

When the boys recognize a lightning rod salesman they met a day earlier, now turned into a freakish dwarf, they begin to question the true nature of the carnival and it’s proprietors. Mr Cooger, head of the group, disguises himself as the boys’ favourite teacher’s nephew through the use of a magical carousel – depending on which way the carousel turns, it ages its riders one way or the other. Miss Foley is tricked into visiting the carnival, lured into a terrifying fate.

Before long, the boys find themselves being chased by The Illustrated Man, also known as Mr Dark. They try to hide, but Mr Dark’s witch can find anything. Fearing all is lost, they at last turn to Will’s father. Charles Holloway comes to the boy’s rescue, proving himself sound of mind and body, despite what the boys view as his ‘advanced age’. They prove that good will always conquer evil and that within everyone is the potential for darkness. 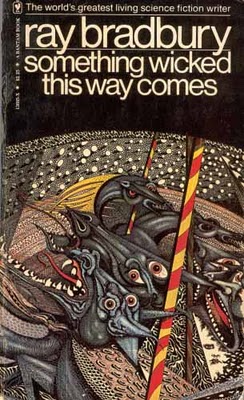 Where Bradbury shines is his exploration of ideas and themes. At the core of Something Wicked This Way Comes is a discussion of age, and humanity’s nature of always feeling like the grass is always greener… While the boys desperately wish they could be older, Will’s father worries he is far too old to be a good parent to his son. The boys too believe that Charles is too old to be of much use to them when they get into trouble. This troubled relationship with age is represented by the magic carousel – it is the key to beating ageing, no matter which direction you want to go, it can provide it, indefinitely. But as the protagonists learn, the lure of something like eternal youth is what corrupts and darkens the soul. While good will triumph over evil, the victory is only ever temporary. With the potential for darkness within everyone, who knows who the next evil beings will be, and how you will have to fight them.

Loving relationships are also key to the narrative of Something Wicked This Way Comes. The most important being childhood friendships and father-son relations. The friendship between the two boys is something they’ve held onto since birth, despite having very different temperaments. Throughout the novel, each of them wonders if their assumption that they would carry on as best friends for the rest of their lives was naïve. Jim wonders, ‘Did friends last forever, then?’ The two of them want different things in life and expect different behavior from one another, how can they possibly go on as friends like that? But as they fight against evil together, discovering each of their particularly weaknesses or strength, they not only gain a more in-depth understanding of their friend, but respect for the differences in their personalities and approaches to problems (and life in general). 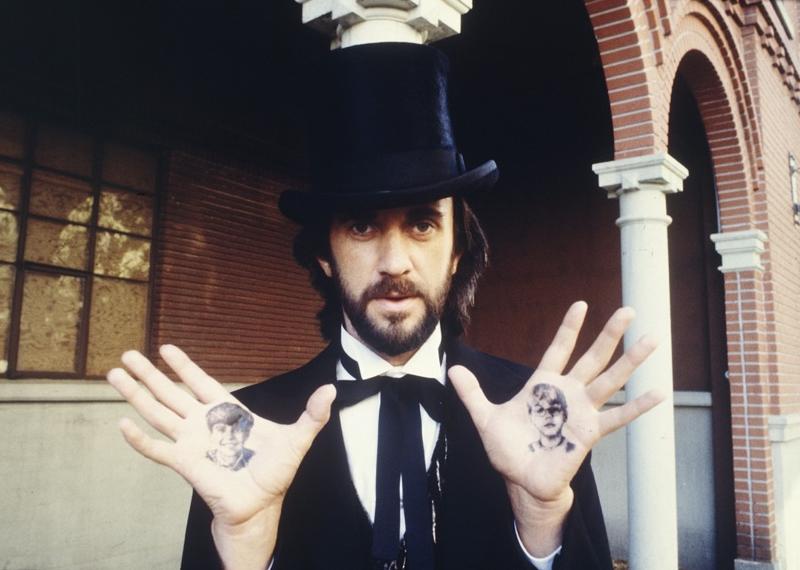 The father-son relationship between Will and Charles Holloway creates much of the core strength for the narrative. At the beginning of the story, both are far removed from one another. Despite living in the same house, they don’t know one another at all. The greater the peril they find themselves in as the story progresses, they closer they become. They learn to rely on one another, trusting in each other’s intentions. Though the real hero of the narrative is arguably Charles, he can’t complete any of his heroic acts without his son. Their victory over evil is a joint one, only made possible by their belief in one another.

A key aspect of writing horror, mystery, or any other genre of prose writing where it relies on building suspense, tension, and delaying resolutions requires a certain amount of feet dragging. What do I mean by that? Well, it isn’t really a mystery if you get the answer right away, is it? What makes readers keep turning pages is the desire to know what happens, the joy of figuring it all out along with the characters, the stress of whether or not things will work out for them, and so on. So yes, these kinds of stories are always dragged out a little bit. That doesn’t mean to say that they need to take a long time to play out within the universe, but the telling of the story is drawn out to increase tension. Unfortunately for Ray Bradbury, he needs to learn when enough is enough. 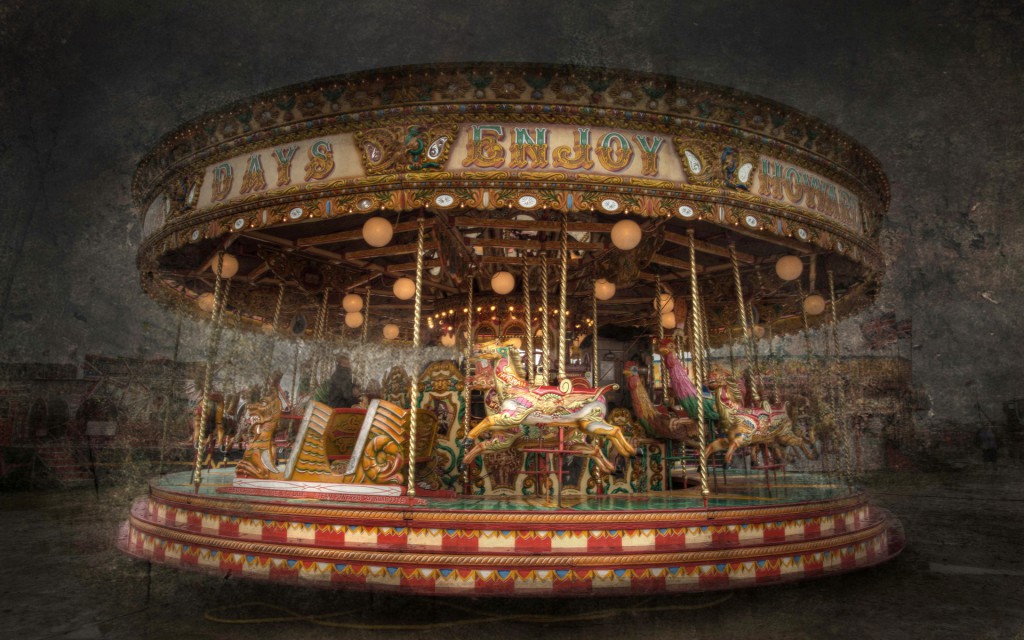 Picture this: terrifying moment, you’re alone, tension is building inside you, you feel like time slows down. The writer portrays this scene in the same way, describing minute detail with all senses covered. Putting the reader in the scene so their heart rates might go up to match the character’s terror. But drawing out each scene should be used sparingly. If it is done constantly, it loses its impact. Bradbury loves to over-describe everything in the most tedious, bombastic way. I was bored, rushing forward to the end of the novel – not driven by curiosity but a desire to finish the damn thing so I could get on to reading something good. Am I being a little harsh? Possibly. But by the end of the novel I was beyond done with it all. For instance, the description ‘Night spiraled in fiery whorls like great thumbprints inside Will’s eyes’ is great, but when every sentence, every description, every scene is full of these over-the-top descriptions, the reader can’t help but scream out ‘GET TO THE POINT!’

An ending of convenience

When you create a story full of weirdness and mystery, you better have an amazing ending to tie it all up and act as a pay-off for having the readers go along with you for so long. Bradbury’s ending is soppy and pathetic. He’s created Mr Dark, a terrifying man of many supernatural talents, but he and his colleagues are brought down by smiles, laughter, and silly songs?! REALLY?! No, really?! Come on, this has got to be a joke on the reader. No one could possibly buy into an ending like that, could they? While it’s a nice sentiment to claim that ‘Evil has only the power we give it,’ but damn(!) that requires a hell of a lot of suspension of disbelief on behalf of the readers. I’m afraid Bradbury just asks too damn much. 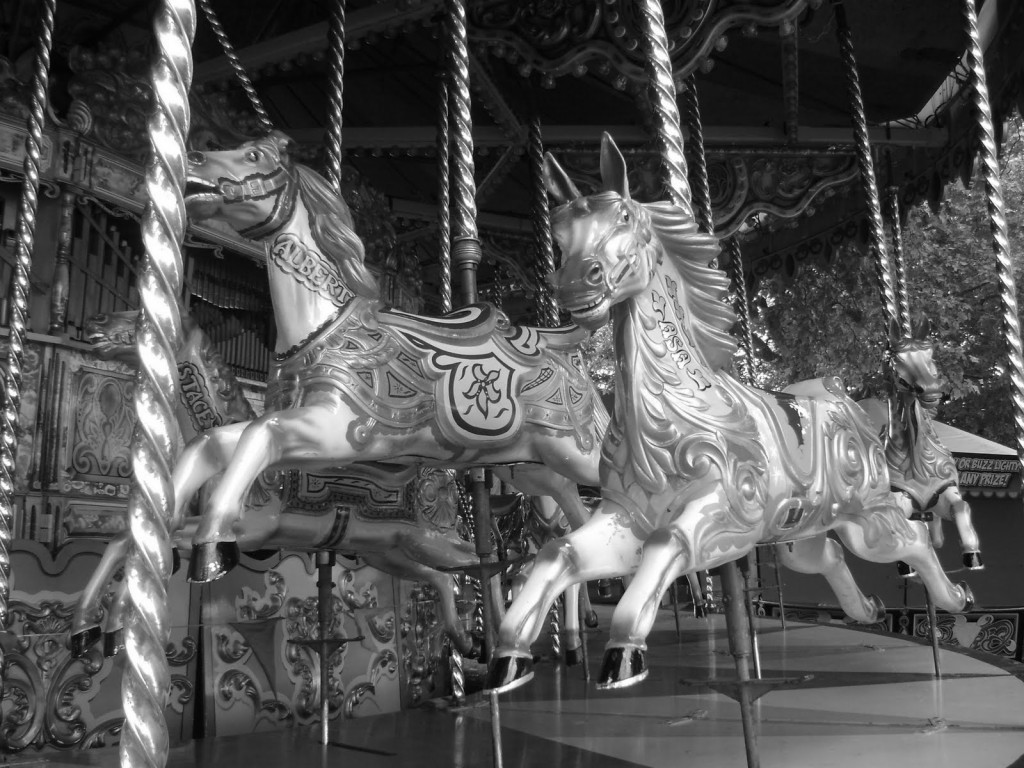 At no point do we get any explanation as to why Mr Dark became the man he was, or why the carnival troupe ever made designs on the boys to begin with – oh yeah, except that within all humans there’s the potential for evil. But is that really an explanation? Seems like a cop out to me. A lazy way of avoiding developing the antagonist’s story. I may have forgiven this faux pas of uni-dimesionality if Mr Dark had lived up to his name, but at no point in the novel was I actually afraid of him. I never once believed he really posed a threat to either the boys or Charles. At any point I felt like the characters would turn around and say something along the lines of ‘If we don’t fear him he can’t hurt us’. And low and behold, I was almost right. How could I have ever been afraid of a creature that could be beaten down by a SMILE?!

Verdict: I understand that Ray Bradbury is a beloved and well-respected writer, but this book does not do his talents justice. Bradbury’s brilliance is in his ideas, which work far better in short story form than drawn out into a novel, forcing readers to slog through ever-more tedious sections of overblown description.

Previous: Horns: The devil has claimed you!
Next: To the Edge of Shadows by Joanne Graham