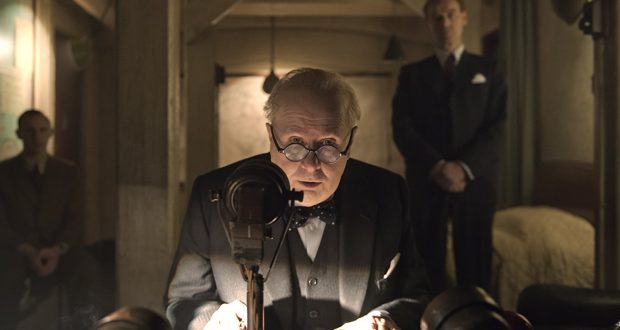 Ah, awards season. I know that stench anywhere. It is now the time of the year where the preliminary awards ceremonies are kicking off. These will firm up the frontrunners for the major ceremonies in February. Because the members of these institutes cannot be expected to remember great cinema earlier in the last 12 months, all the studios pile in their safe bets for general release now. Academy members may well have seen these films earlier in critic screenings, but by releasing them in cinemas just prior to the awards, the films benefit from extra coverage and the academies can pretend to be relevant. And so, striding into cinemas comes Best Actor favourite Gary Oldman in Darkest Hour.

There’s something of a tradition with awards fodder that they favour big flashy performances over a more measured worth of a film. This is especially true of those aiming squarely at a Best Actor/Actress award. In many of these films, you find that the message is muddled, that the ideology of the film is rather abhorrent, that the direction is flat, and the screenplay built around delivering big monologues rather than a structured narrative. It is largely because academies are composed of current and former actors so it appeals to their vanity that this is the most important or iconic part of the film. 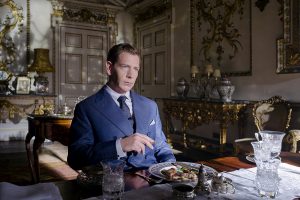 Darkest Hour is altogether not that insightful but has a very strong performance to pin its awards hopes on. If Oldman wins yet more plaudits for his portrayal of Winston Churchill then I shan’t be complaining. His earlier career saw him garner a reputation for playing roles well under heavy and convincing prosthesis which serves him well here. He has clearly studied the quirks and idiosyncrasies of Churchill’s manner. It is hard to seem naturalised with such an overtly eccentric character but, somehow, he manages it.

Oldman is pillar around which all other elements are slavishly built. Some do stand out though. Kristin Scott Thomas does not have much to do but she’s an actress of such accomplished skill that she still leaves an impact. I would have liked to see more of Churchill’s rivals within the War Cabinet, Viscount Halifax (Stephen Dillane) and Neville Chamberlain (Ronald Pickup). One of the only other pivotal roles in the film is Ben Mendelsohn’s George VI who I enjoyed immensely. Apart from getting all the best lighting in the film, Mendelsohn’s monarch gets to toy with some complexity otherwise lacking from the larger cast. 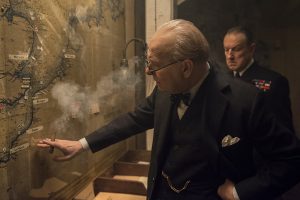 But then around this towering performance of Oldman and his laudable ancillaries, we must look at the rest of the film and it is nothing to write home about. This is especially disappointing given that we have period piece veteran Joe Wright in the director’s chair. Anna Karenina, this is not. In part, this film does suffer from coming so soon after Christopher Nolan’s more accomplished Dunkirk, given that the sea evacuation is a background feature. If both film’s main aim to page homage to Britain’s wartime fortitude, Dunkirk approaches this with dignity and some real technical craftsmanship, Darkest Hour opted for saccharine sentiment and cheese.

And my GOD, does it get cheesy. What promises initially to be a solid political character piece turns into prattling sentimental dreck by the end. Lily James is wasted as a rather vapid rendition of Churchill’s personal secretary Elizabeth Layton, only there to get teary-eyed and exclaim just how wonderful he is. The thrust of the film is ‘don’t negotiate with genocidal megalomaniacs’. Thank you for that startling revelation. Nor does Darkest Hour overcome the forgone conclusions of its story: we already know Churchill stays on as Prime Minister and wins the war so what detailed insight on the wartime running of the country can be brought to the table? Nothing of note, alas. 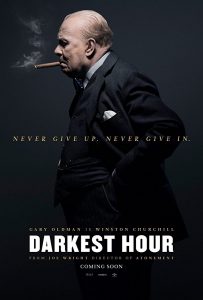 Essentially, the film is too reserved and muddled to really say anything. That is its fatal weakness. Churchill just goes through repetitious arcs of assert/doubt/reassert and has a flare for oratory but the story doesn’t let him (or anyone else) do anything. There is great attention paid to the oddness of his character and the difficulty people had in dealing with him, but that does not make up for how inactivity that undermines everything. The political machinations he must face down are shallow so we don’t see his tactical mind at work. The resolution of Darkest Hour rests not on a matter of ingenue or bravery but on bland stubbornness and a worrying ethos of assumed rather than qualified deference that runs through the film.

That deference made me slightly uncomfortable. It certainly cripples the film which is happy to coast on the basis that Churchill is a great man of destiny rather than proving definitively what made him the man of the hour. But beyond that, this deference makes the film rather uncritical. There are gestures and jokes about Churchill’s difficult character but no critical complexity. Yes, he goes on to win the war BUT what about a serious take on his history of alcoholism, wife-beating and a string of objectively terrible policy decisions. These are only ever addressed to be dismissed or, even worse, excused. If you compare to the television film The Gathering Storm which had Albert Finney as the iconic prime minister, there was no suggestion that an equally fierce performance must compromise the depiction of events or the ability to depict the subject in an unflattering light. Darkest Hour feels gutless by comparison.

Verdict: Darkest Hour has one great performance and relies on knee jerk patriotism to make up for its shortcomings.