Home / Film / Dunkirk: You can almost see it from here… 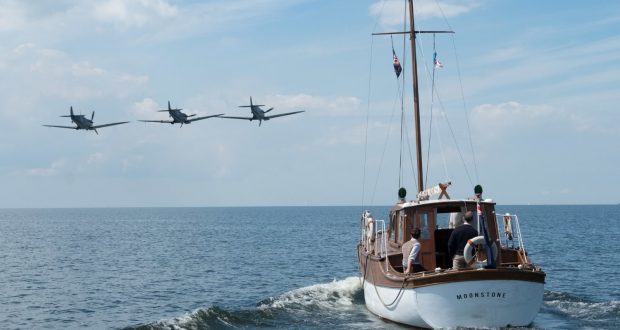 400,000 soldiers stranded on a beach just across the coast from Britain. Germans forever hovering around the perimeter, aircraft picking them off, and the Navy unable to send enough ships to get everyone home. Christopher Nolan tackles one of the biggest and most gruelling rescue missions in history in a very technically impressive film that still manages to emote despite its daunting scale and spectacle.

Nolan, of course, is renowned for the overt artifice of his films’ plots. They tend to fold back on themselves or loop in some fashion. It is the hallmark of his film-making that can be seen in Memento, The Prestige, Inception and even his abysmal Interstellar. Dunkirk is no exception where we have the action relayed to us from three different perspectives and time frames – foot soldiers on the beach, a civilian sailor whose boat is requisitioned for the rescue, and a couple of fighter pilots. The film chops between these strands, often foreshadowing or re-contextualising events as they intersect.

The land, sea and air characters serve as a good way to capture the scale of events 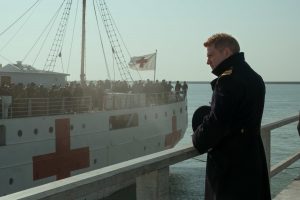 The film is an odd beast of a war film in not being concerned much with warfare. The Nazi forces are almost entirely absent apart from some anonymously fired shots and some distantly glimpsed planes. Nolan is not concerned with heroic feats of aplomb to beat the Germans, the focus is on the struggle of the operation. In this respect, Dunkirk resembles the 1970 war film Tora! Tora! Tora! which chronicled the attack on Pearl Harbor from both Japanese and American perspectives, taking a procedural approach to how events unfolded. In many ways, Dunkirk is Nolan’s first venture into disaster movies, as most of the action comes from simply surviving implacable earth-shaking forces which the characters have no agency to affect.

I would not recommend this film to claustrophobics. The sequences of soldiers being trapped in the enclosed interiors of sinking ships that fill with water as the lights blinker out, all the while more torpedoes and bombs tear away at the hull, are effective and harrowing. Nolan’s reliance of real sets brings immediacy to the action which you’d struggle to achieve with CGI ships sinking. It also communicates the scale of endeavour, in real-life and in filming a facsimile, as the hardship appears so relatable and real.

Dunkirk is by no means gory, but the conditions faced down by these men are hauntingly grim 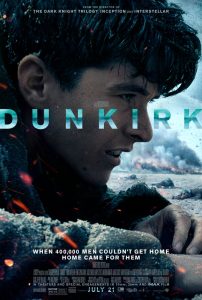 Hans Zimmer gets some flak for rather samey or generic scores, though he suffers largely from being imitated to absurdity, but Dunkirk offers easily one of if not the best score in his repertoire. It’s all thrumming tension that spikes into the nerve-shredding crescendos. As with all great scores, the way it is integrated into film is of crucial importance. In this case, Zimmer’s music harmonises in quite sinister ways with the whines of Spitfire engines and the visceral clout of the explosions. Dunkirk can boast excellent sound design on top of its music. Nolan is keen to communicate the arduous conditions on a sensory level.

My only real reservation is the human aspect of this. Not that there is a rum performance or some great oversight in how the characters are thought through. This is, by its nature, a large ensemble piece and quite sprawling. No one person gets much focus, nor can their individual stories exhibit much nuance or complexity. The characters work to give some emotional investment and perspective on events from lots of angles. Individually, they are a touch shallow and have predictable little arcs. But the characters are suitable for their purpose of paying homage to the individuals caught up in this bloody and miraculous operation.

Verdict: An impressive tribute to the evacuation of Dunkirk that treats the subject with vigour and respect.

Previous: The Beguiled: Can I get you anything
Next: Lucky Ghost by Matthew Blakstad