Home / Books / Here, There Be Dragons 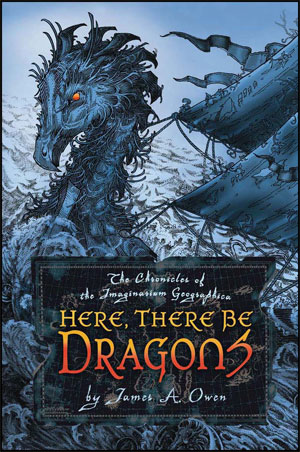 Finding new books is always difficult for me. I normally float towards Science Fiction/Fantasy. Every now and again I make my way to historical fiction or some suspenseful mystery, however, this was not one of those days. As I was walking around the YA (Young Adult) section, I came across a hardcover that shimmered out of the corner of my. As I held up the book, I noticed the intricate detail etched on to the cover in a reflective style of blue with a “ticket” at the bottom where the title screamed for me to try it. Here, There Be Dragons by James A. Owen (local of Arizona); the book allowed me to flip through its delicate pages where I found some gnarly chapter art on page 110.

John, Jack and Charles are Oxford scholars, who find are charged with the responsibility of taking care of an atlas known to those of a certain world as the Imaginarium Geographica. As the book is progresses, I found that John mirrored decisions and thoughts that I tried to predict throughout the book. I wish I could say that I’d related more to Jack, but some of us can’t be swashbuckling heroes.

Essentially one finds James A. Owen spelling out a world where there has long been a tradition of scholars or individuals who have taken care of the atlas. The Geographica has a collection of maps and information that is the crucial to the present, past and future. It is written in many languages, which is why John and his Professor play out as the scholars. They had been scouted as the new caretakers regardless of whether they wanted the job.

As the story unfolds, we are introduced to a few more characters. Bert is an important figure who plays a mentor role similar to John’s Professor; we find that he takes the scholars on a trip to the lands of the Imaginarium on a dragon boat (similar to Peter flying in London’s sky) named the Indigo Dragon.

As the book progresses, Owen loves to throw in beautiful homage to literary works, along with direct quotes. My favorite is the nod to the Arthurian Legends.

It reads quickly as we get a few more characters: the Morgaine (Greek reference), the Winter King and many others who almost spawn out of classical literature. The scholars, now caretakers, attempt to foil the plans of the Winter King who wishes to take over the Archipelago of Dreams and a few other places the Geographica holds. There are some righteous battles and a killer plot twist that takes the caretakers on an adventure that challenges all three of them to their limits. However, it doesn’t seem quite plausible given they are just scholars.

Personified animals and mystical beings, along with a handful of other fantastic notions of fantasy, James A. Owen does more than bring to light the adventures of current literary figures, but pays homage to classical literary figures whom paved the way for our imagination to thrive.

Just remember to heed the comfort – Here, There Be Dragons.

Try out the rest of the series with the conclusion out Nov ’13 (Says the webpage!)

Lev Grossman’s The Magicians: He was used to this anticlimactic feeling
Book Review Dragons Fantasy Here There Be Dragons Imaginarium Geographica James A. Owen YA Young Adult Fiction 2013-05-03
John Leal

Previous: Star Trek: How JJ Abrams ruined everything
Next: 4 Comics to Check Out This Summer