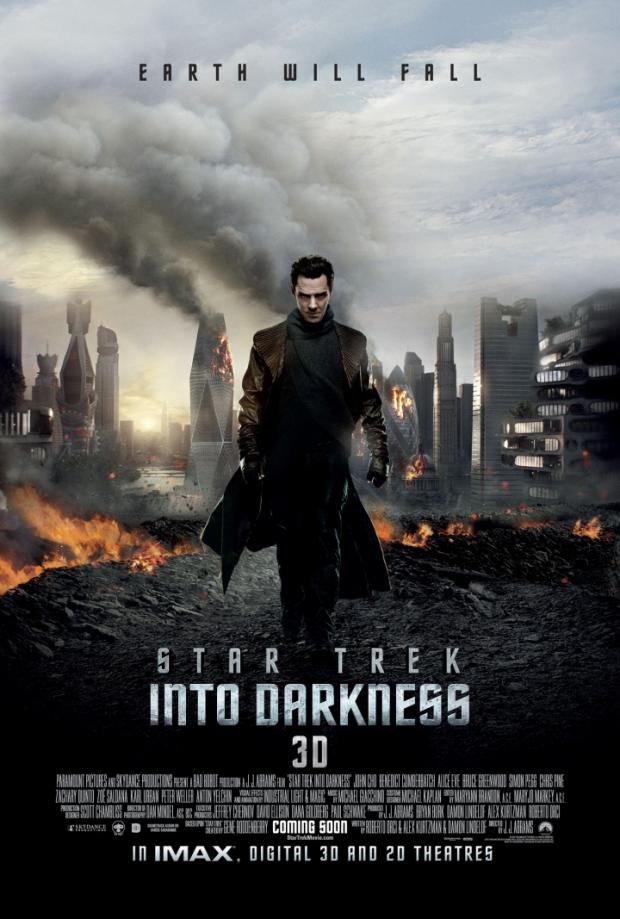 I was having a discussion with my housemate (and fellow Pop Verse writer) Ash the other day, and we came to an agreement about the new Star Trek films. He was never a fan of old Star Trek in any of its guises; meanwhile (as you should all know by now), I’m a die hard of TOS and TNG (not so much the others, but I do still quite enjoy them). So, coming at the issue of Star Trek from very different angles, we came to the same conclusion: new Trek is not, in fact, science fiction. JJ Abrams has left science fiction behind and gone entirely for fantasy. How did we come to this conclusion? Simple: science fiction is clever; it passes comment on society, politics, and philosophy. New Star Trek does none of those things.

This realization helped me accept the new Star Trek. I have always acknowledged that while I absolutely despised the first new Trek film, it was a fun film. It was aimed for mainstreamers and it gave them an entertaining time. Fine. But it wasn’t Trek. Now that I’ve accepted that it isn’t even science fiction, I approached Into Darkness in a much calmer, more receptive frame of mind. Does that mean I liked the film? Of course not, it was terrible. But the eye rolling and head shaking was kept to a minimum (of course everything is relative – it was kept to a minimum for my standards) and I didn’t come out of the experience wanting to beat JJ Abrams with a giant purple dildo (some might say I’ve grown as a person). 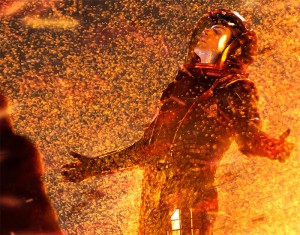 The film opens with a chase scene – Kirk and Bones running away from a primitive tribe – while Spock is being lowered into a volcano hoping to save the planet from destruction (with science!). The first line of dialogue made me giggle, I can’t even remember what it was now, but I thought to myself ‘why on earth wouldn’t you try to get a better first line than that?’ And I was right. It was terribly unmemorable (it flew out of my mind with incredible speed). We also never find out why Kirk and Bones were down on the surface, or why Kirk stole the parchment from them. Just a crazy whim, Kirk? Spock is left trapped in the volcano, forcing Kirk to choose between following the Prime Directive and saving his friend. The hotheaded, emotionally driven Kirk of course chooses Spock. In return? Spock files a report.

Back on Earth, Kirk is reprimanded for his handling of his latest mission (letting the primitive tribe see the Enterprise) and stripped of his captaincy. Fear not, it doesn’t last long. Terrorism strikes London, closely followed by an attack on Starfleet’s Headquarters… and oh look, Kirk’s back to being Captain again (told you it didn’t take long!). Off they go to chase after Kahn (going under an alias at that point), which takes them to the Klingon home world of Kronos. We have Uhura talking Klingon (had to give the geeks something to masturbate too… yep, Zoe Saldana can speak Klingon!). 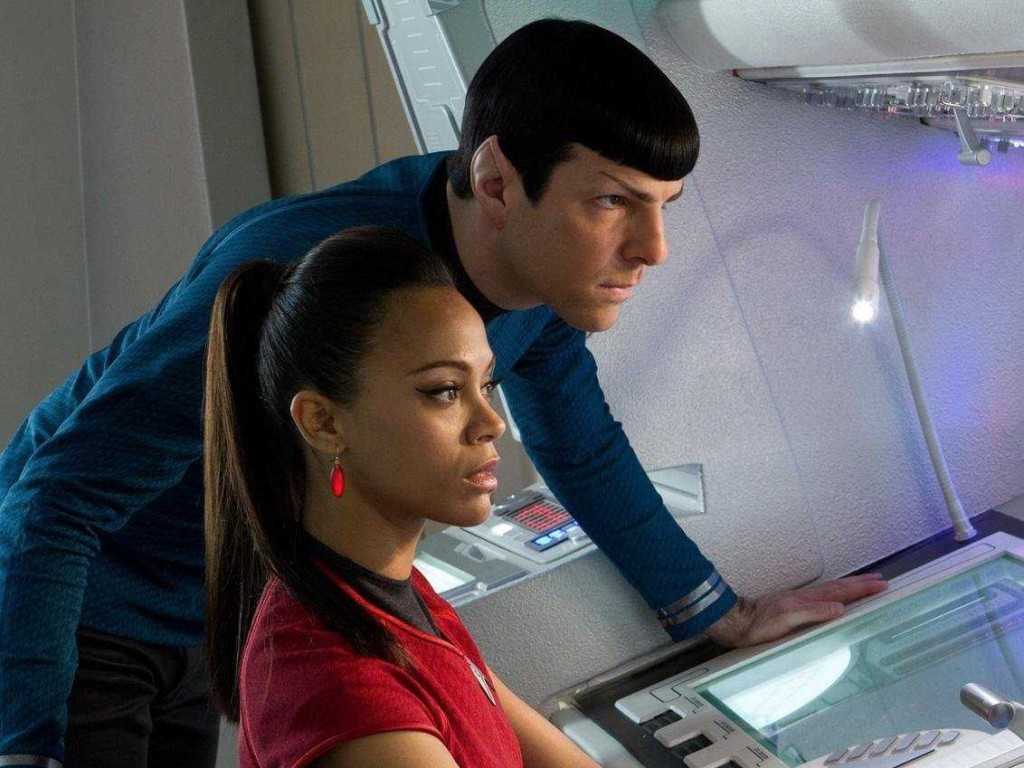 Before long, it becomes apparent that Khan is not all that he seems. Here, finally, some politics enters the film (but doesn’t stick around). The threat is within Starfleet – who is the real bad guy? Oh yeah, and Scotty quits (but again, not for long), Carol Marcus shows up, and Sulu gets to be Captain for a day.

Why it was rubbish

Star Trek has the potential to be a great ensemble piece. Abrams ignores this potential completely. Rather than using the cast for anything interesting, he drives the film with Kirk and Spock, with only a handful minor interactions with a couple of other ‘names’. On the whole, everyone who isn’t Kirk or Spock is ignored completely or is one-dimensional. Sure, this is how it went in the original series, but even then we got some insights into the supporting players, which is why they were memorable (and lovable – or maybe that was just because no one can keep the awesome George Takei down!). By the end of the film, I did wonder why they even bothered to have some of the characters there… what was the point of Chekov and Sulu in this film? There wasn’t even really any point to newbie Carol Marcus (future mother of Kirk’s son… the ridiculously irritating David Marcus). They spend most of the film trying to find reasons to include these characters. 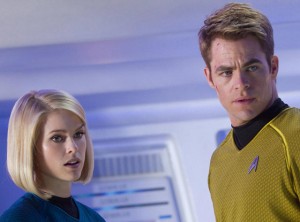 Meanwhile Kirk and Spock’s relationship drives the film. Kirk is played by the thoroughly uncharismatic Chris Pine. Kirk is a character that is meant to be intelligent, although impulsive and driven by his emotions. He is respected and has some gravitas. Chris Pine gives us none of these qualities. Every time he is on screen I grew bored – he has no screen presence to speak of. Without the screen presence, it does make it difficult to believe that he is the same chick-magnet, shirt-ripping fiend of original series fame.

Spock is portrayed by Zachary Quinto – with much more emphasis given to his ‘half-human’ side than the Vulcan within. What made the original Spock so interesting was his emotional unavailability running alongside his obvious affection for Kirk and Bones. New Spock, however, is far too emotionally available. Where’s the fun in loving someone who might actually love us back?! 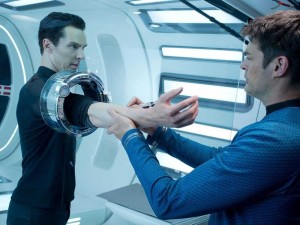 I have heard some complaints about Bones in Into Darkness; that he is overused as comic relief, and does little other than pass comment on Spock and Kirk’s behavior. Sure, I think this is true – as with the other characters, he isn’t given much to do. But as far as using him too much as comic relief, I don’t agree. The original Bones relished in coming up with new insults for Spock, so it was nice to see a bit more of the TOS-flavour Bones in this film. In fact, I think this is the one thing that this film did right… or at least would have done if they’d mixed the insults with giving Bones something to do.

Then we have the baddie: Khan. Benedict Cumberbatch does a very good job, but he doesn’t have all that much to work with. His motivation is sketchy at best. He sounds a little bit whiny and vague… ‘Oh, I am avenging my friends because Marcus was mean to me, the big bully!’ Hmmm, not the manly, super-human that he should be, huh?!

They really emphasize Khan’s physical abilities – this guy is a super badass (or maybe the Klingons are just seriously lame). But they let his intellect fall by the wayside – perhaps this is necessary, as the original series fights between Kirk and Khan always came down to a battle of wits, but no one in their right mind would believe Chris Pine could beat even a Ferengi intellectually. While they don’t ‘show’ us any solid evidence that Khan is clever, they sure do harp on about it. Maybe they were compensating for the lack of evidence? 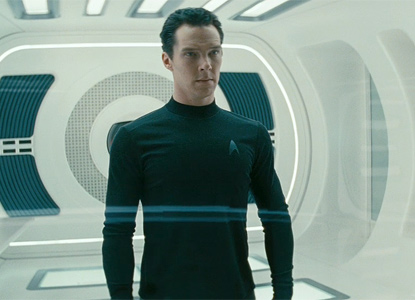 Star Trek Into Darkness was the film that never ended. Every time you thought there was an ending, it failed to deliver. It just went on and on and on and on. I was thoroughly bored by the end. None of the threats ever felt ‘real’ or threatening enough, the suspense just was not there. I’m not sure how they could have ‘upped the stakes’, but I just didn’t care. I knew everything would work out ok in the end, and I wasn’t able to get caught up in the action as it was happening. Of course, this might have been a result of temporary blindness from ALL THE FUCKING LENS FLARE… but who knows? 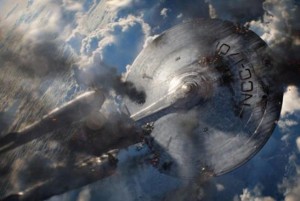 Abrams invented a brilliant ‘get out of jail free card’ with the first film. For any Trekkie that didn’t approve of the new Trek he could hold up his hands and say ‘different timeline guys!’ That makes anything ok, right? These are not in fact our beloved characters; they are new characters, in a parallel universe… or something like that. Ok fine, I’m not going to get into an argument about why that was a stupid, cowardly move to make. What I will question is this: if you make such a big deal about this Trek being new and different, why go and immediately remake many people’s favourite film from the original crew (The Wrath of Khan)? Playing with the ending might have been clever if it actually added something to the story – but all it did was further show how incompetent ‘new’ Kirk is. He should not be Captain. And after seeing the events of this film, it seems fairly obvious that Spock should be.

Verdict: This is not a good film. Parts of it are enjoyable enough (fun and silly), but on the whole it is labored, doesn’t hold together well, and goes on too long. Go watch The Wrath of Khan instead.

Previous: Fables
Next: The Acquirers #2