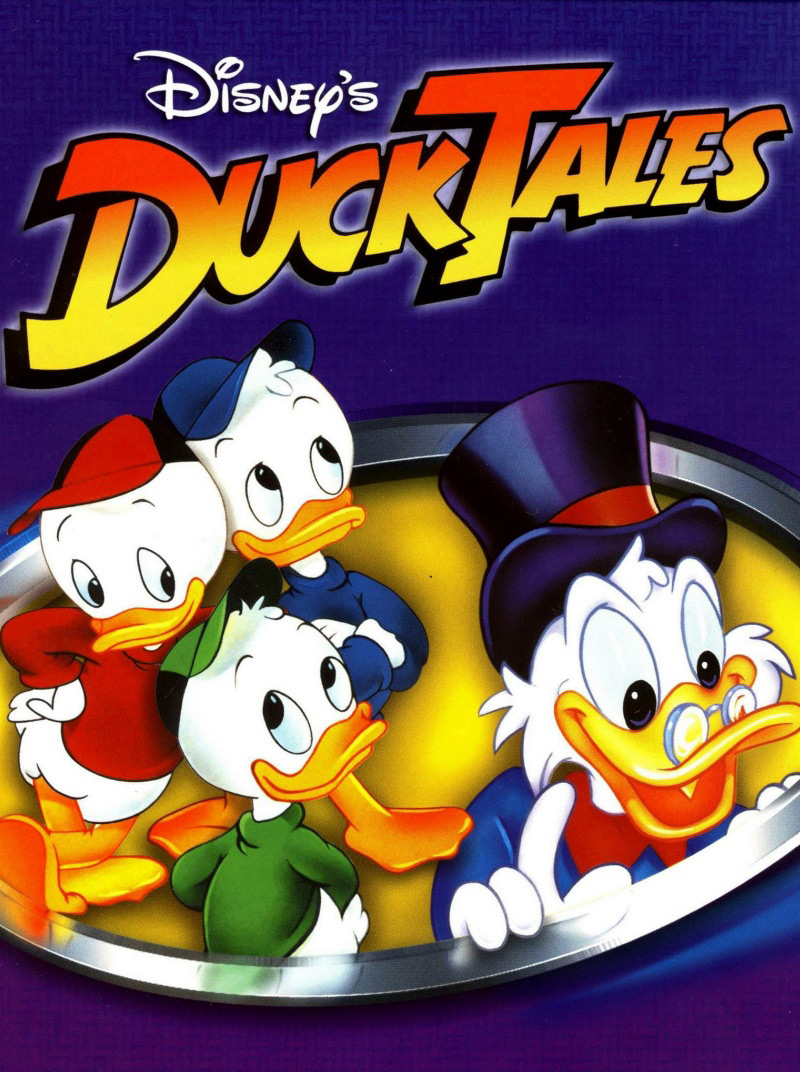 I loved being a kid and I often wish I could go back to that simpler time. No more worrying about the damp problem in the upstairs bathroom or whether I can afford to get the electrician in. When I’m feeling particular nostalgic, I love to go back and watch old cartoons. Some of them hold up better than others, but all have their moments.

This show has to be one of my all time favourites. Sure, it isn’t as clever as some of the cartoons we have around now (like Phineas and Ferb, for instance), but it is really fun. Lots of adventures and general mayhem, a money grabbing but ultimately loving uncle, three mischievous young boys, the worst airplane pilot in the world, a gadget man, and a whole lot of mystery. And just so that it isn’t a total sausage fest, there’s Webbigail and Mrs. Bleakley. Scrooge McDuck is the Indiana Jones of Duckberg without any pretense of finding artefacts for historical value – it’s all about the money baby! I can absolutely get behind a such an enterprising man! Also, if you enjoy DuckTales, make sure you watching Darkwing Duck too!

Who didn’t love this show?! It was great! The social dynamics of a group of toddlers could have been lifted, set in a high school, and it still would have been applicable (which they did do with All Grown Up! several years later – unfortunately it sucked). We all loved Tommy, effectively the jock, Chuckie (the dork), Phil and Lil (the weirdos), and Angelica (the bully). I also think a special mention has to go out to Tommy’s dog Spike; he was great. What’s nice about this show is that the adults that feature are also great characters – they each have their quirks and very distinctive style. The creators brought in issues of race and religion with the adults, and the babies were able to approach this ‘issues’ from their naïve viewpoint.

There is one episode in particular of Recess that has stayed with me all these years (‘The Voice’)… Mikey’s voice starts to change, and he discovers that he can sign (boy can he sing – the voice was provided by the late, great Robert Goulet). But Mikey is not very confident and finds that he can only sing when he is in the bathroom. To this day I am not a confident person, and that episode really struck a chord with me. My favourite part of this show was the conflict that often developed between Mikey and Spinelli. They were the embodiments of T.J.’s ‘angel’ and ‘devil’.

Yo football head! Arnold was the ultimate nice guy and I admit to absolutely having a crush on him. Having Helga, the school bully, madly in love with Arnold was absolute genius – showing us that bullies only behave that way because they are insecure. Arnold’s best friend Gerald is a great storyteller. He tells stories of his friends’ adventures as well as the urban myths surrounding their fictional town. I think I used to want to be Gerald – he was cool and told stories. Now that I’m all grown up… well, I tell stories at least.

I have always loved weird and wonderful characters and especially identify with outcasts. Aaahh!!! Real Monsters particularly appealed to me in this way – the characters are not only monsters, but outcasts from their own monster world. They are geeky weirdos trying to succeed in the same way any kid tries to get by in school. Ickis, Krumm, and Oblina attend school in their world of monsters, often visiting ‘our’ world in order to scare humans as part of their school assignments (generally using toilets as a means of transportation). I still remember one episode where Oblina gets braces – they take up her entire face, they’re terrifying! When I had to get braces myself I always felt I must have looked much like Oblina did.

6) Bump in the Night 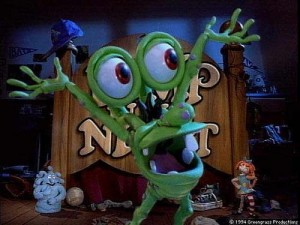 While we are on the subject of monsters, Bump in the Night was another of my favourite shows. I’m not sure if this really counts as a ‘cartoon’, given it was stop-motion, but I’m going to include it anyway. Any show with a character called ‘Squishington’ and featuring musical montages is all right in my book. The closet monster, made up of piles of clothes, stuck with me well into my teenage years. When giant piles of dirty clothes began to pile up in my room, I did wonder when they would turn into a giant monster and start chasing me throughout my house, much as they did to Mr. Bumpy.

In Australia, we got a lot of older television series. One show I particularly loved was Get Smart – silly and full of action, what’s not to love? Inspector Gadget was played by Get Smart’s Don Adams, and was just as silly and action-packed. Just as Max has 99 in Get Smart, Gadget has his niece Penny. Their super-intelligent dog, Brain, and his wonderful outfits were endlessly entertaining as a kid. But it was really Dr Claw and M.A.D. Cat that I loved best. They were the first big ‘baddie plus cat’ team I fell for and decided that I would be a mad cat lover and general evildoer when I grew up.

8) Hanna Barbera: Scooby-Doo, The Jetsons, Tom and Jerry, and The Smurfs 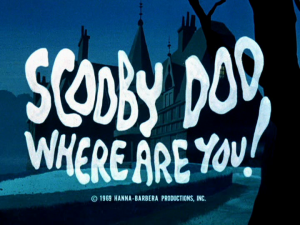 The Hanna Barbera animation studio created many brilliant cartoon series, but these four were my favourites of the bunch. I loved the logic that would come out of any ‘scary’ situation in Scooby-Doo, and as an everyday scaredy-cat, this was a particularly good lesson to learn. The Jetsons helped fuel my life-long love of all things sci-fi. I would still like to have someone invent the car that folds into a suitcase. Tom and Jerry appealed to the cat-lover in me. Although I think it might have also spawned unrealistic ideas of romance – Tom liked to woo pretty felines by serenading them. Where’s my song, boys?! Meanwhile, The Smurfs was the ultimate sausage fest. The only reason there was even one female (Smurfette) was a result of the infamous villain Gargamel (who created Smurfette as part of an evil scheme).

Many of the characters featured in Looney Tunes have stood the test of time (Bugs Bunny of course has never been far from the public eye, although he was never a particular favourite of mine). The two that I always thought were the best were Pepé Le Pew and Foghorn Leghorn. Poor Pepé always chased after Penelope Pussycat, believing her to be a lovely female skunk, being stung by love’s cruel kiss never to be requited. Foghorn’s brilliance is in his belligerence. He torments the barnyard dog, so much so that we are never quite sure whether we are supposed to be rooting for Foghorn or the dog.

So this show aired when I was a little bit older, but it was brilliant, so it gets a mention. I grew up with a cat and dog, whose personalities could not have been more different, but they loved each other. The premise of this show is completely weird – one animal, two front ends (but how do they poo?!). But it made for excellent story telling. The character’s natural predispositions meant that they were constantly at odds with one another, creating endlessly entertaining conflicts.

Previous: Why I love conventions: 5 reasons to go to comic con
Next: The Acquirers #5.1