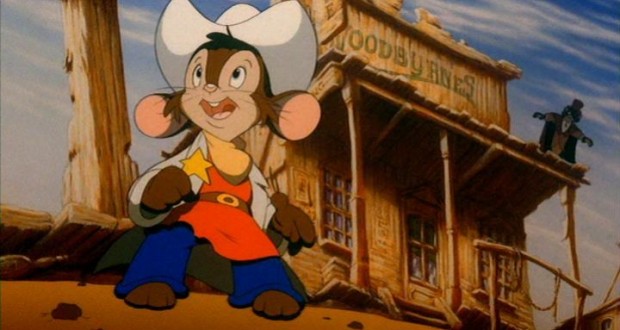 These days, kids films aren’t considered ‘good’ unless they have lots of laughs for the adults as well as the kids. They aren’t really kids films at all any more, if you ask me… if they try to please both adults and children alike, it seems like they are missing the point. Not that I’m really complaining. I’m a big fan of kids’ films. Disney’s recent output has tended to be excellent (no, I don’t count things like Brave or Cars), and Dreamworks aren’t far behind – I am stupidly excited about How to Train Your Dragon 2. But if you go back and watch the kids’ films you loved as a kid, you might notice something – they really were just for kids. 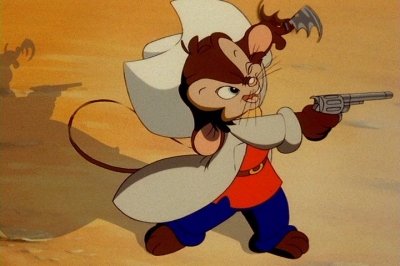 So yeah, I understand now why my mother was so frustrated with me for watching, rewinding (good ol’ VHS tapes!), and re-watching films like Fievel Goes West (1991). At one point in my life I could recite this film from start to finish. The only reprieve I might have given my long-suffering parents was to put on Star Wars. While most people revere An American Tail, I find it far too depressing. I think the sequel far outweighs the original in entertainment value (although I admit that it does not have the depth or impact of the first installment).

I recently re-watched Fievel Goes West. I’m not sure when I last saw it… I was probably 8 or 9 years old. It isn’t a film that really stands the test of time, much to my disappointment. Having said that, there was still a stupid grin on my face the entire way through. When you love something as much as I loved this film as a kid, it is hard to change your opinion later in life – even if a more critical side to your film viewing has since developed. I will always love this film. To anyone who insults it, I’ll give ‘em the lazy eye!

The plot of this film requires a massive helping of suspension of disbelief to get on board with. It contains the most ridiculous of evil schemes ever, but somehow the protagonists fall for it and we join them on the ride. The mean streets of New York aren’t proving to be full of freedom and wonderful opportunities the Mousekewitz family were hoping for. They are constantly being tormented by a cat gang led by Cat R. Waul (John Cleese).

Just when they think all is lost, there is promise of a better life in the west – where cats and mice live in peace. They buy themselves a ticket and off they go. But Fievel uncovers the evil plot – that the cats are just using the mice to build them a new town before they make mouse burgers of them all. The cats run Fievel off the train and once again he finds himself separated from his family.

Meanwhile, Fievel’s best friend Tiger (Dom DeLuise) is trying to catch up to Fievel and find his lover, Miss Kitty. General adventures ensue across the desert – mirages, cacti, tumbleweeds, and savage mice who think Tiger is a God. But they finally make it out West and Fievel still needs to save the mouse population.

With the help of the old dog Sheriff, Wylie Burp (Jimmy Stewart), Fievel turns Tiger into a badass. Together the three of them take on Cat R. Waul and save the mice. 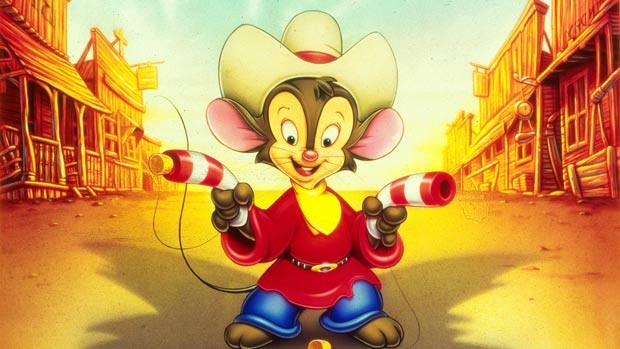 Fun in the sun but not a lot of substance

I love a good Western. So having a bunch of amusing anthropomorphic animals take off the genre was probably always going to play well with this kid. And come on, a mouse whose best friend is a good-natured cat? What kid wouldn’t love that? If the guns and saloons weren’t enough to catch a kid’s attention, don’t worry, this film is intense from the word go. It moves quickly, with the protagonists in constant – and always new – peril. As an adult viewer, I found it almost stressful. There were very few moments of downtime. 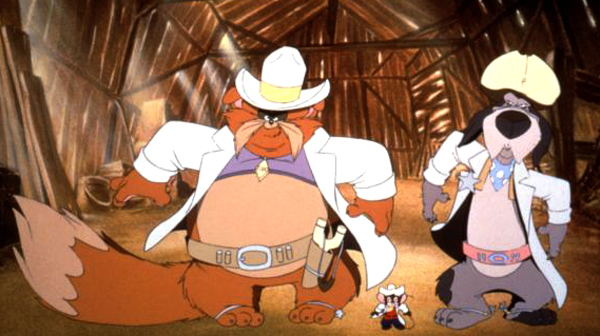 The film is a great romp – it is loads of fun but it doesn’t do too much else. None of the characters are terribly well rounded. They are mostly flat, stereotypes – relying on extreme personality types. The bad guys are bad just, you know, because. It suffers from a Dickensian style of ridiculous coincidences and the plot barely makes sense. Jimmy Stewart’s Wylie Burp is criminally underused and the film is so short (74 minutes long) that you barely feel you’ve settled in when it is all over.

Fievel: The mouse who had no fear

With all of its flaws, the film still manages to be completely endearing. Why? Fievel! What a great character! He is almost fearless. Curiosity always gets the better of him and he rarely lets anything get him down. To this little mouse, a setback is just an opportunity for another adventure. And while he might feel lonely at times, he never gives up hope. He’s also a dreamer – an imaginative little creature who is able to entertain himself completely whether he is with friends or alone. What a great role model for kids. 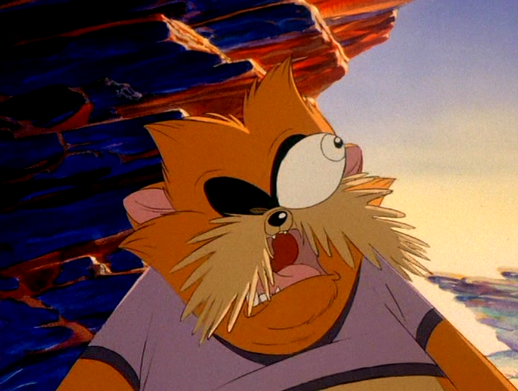 This is one of those films that I love geeking out to when I find someone else who grew up loving it. But I doubt it is going to win over too many new fans. Oh well, I don’t mind being out on my own when it comes to being a crazy Fievel Goes West fan.