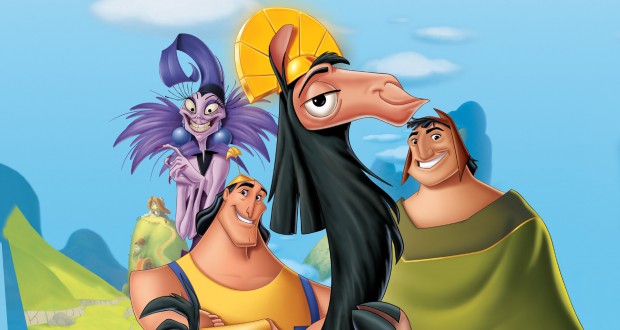 I often wonder why The Emperor’s New Groove, originally released in December 2000, isn’t talked about more as one of the best Disney animation films of all time. Because it really is. No character is wasted, they all have distinct personalities and motivations; the humour is biting and sarcastic (often poking fun at the genre of animated children’s films); they even break the fourth wall (a lot). I’m really not sure what anyone could dislike about the film. It hasn’t got the infectious musical numbers that some Disney films do, instead it fills the time entirely with plot and character development… along with some really brilliant jokes (Why do we even *have* that lever?!).

So why don’t we hear more about it? The film isn’t as saccharine as many Disney animated films and there’s no romantic storyline at all (just the already existing, stable relationship of Pacha and his wife, if you can count that). The story is entirely focused on a man who has everything at his fingertips learning to think of others. Simple, but effective and relatable. And possibly there’s an argument for the theme of finding friendship in unlikely places.

Yzma: Scary beyond all reason

‘This is Yzma. Living proof that dinosaurs once roamed the Earth.’ 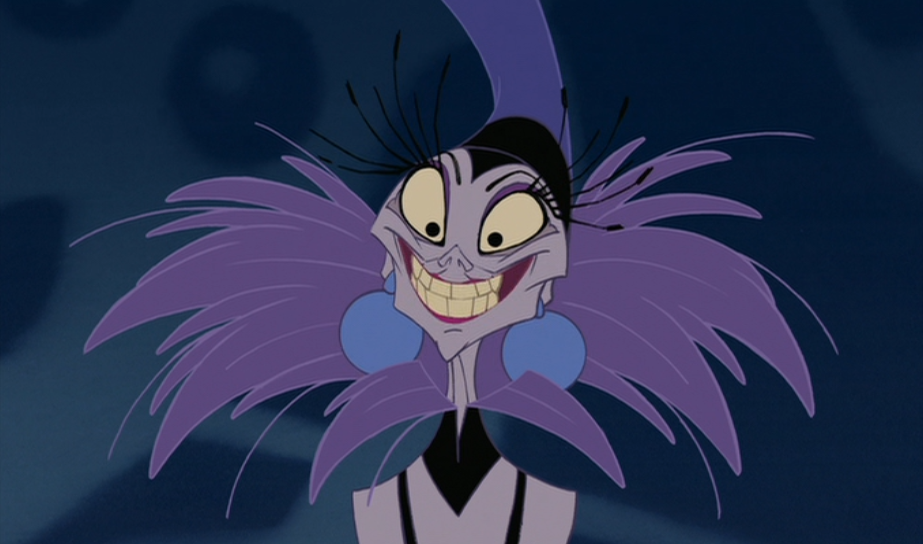 Too often the villains in Disney films are caricatures whose motivations are simply ‘wants more power’. Yzma’s construction is more nuanced and interesting than the typical Disney villain. When we first meet her, we see her sitting in the Emperor’s chair, playing at being Emperor. It’s something the viewer can understand, a thirst for power, but she isn’t particularly evil or hurting anyone… yet. Not until Kuzco dismisses her without a second thought.

In another film, Yzma might have been the protagonist. Character with ambition is set aside because they might actually be a threat to higher ups! What makes Yzma the villain – despite her appearance and a killer voice (casting Eartha Kitt was genius) – is how she chooses to deal with her pain. Not by overcoming the odds and showing everyone they were wrong, but with poison. Class, let that be a lesson to you: the line to evil villain-hood is poison.

But Yzma’s villainy isn’t really what makes her the true baddie. After all, her plans are overly complicated and rely heavily on her inept sidekick. It’s her bitchyness that really sets her apart. She knows exactly how to hurt those closest to her.

‘I never liked your spinach puffs!’ 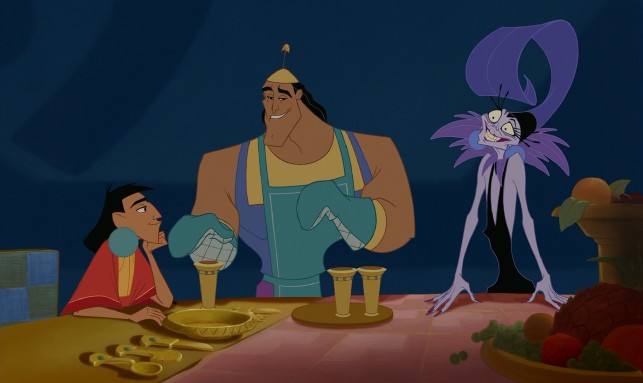 Similar to villains, sidekicks generally have little to no depth in films of this kind. Stereotypes are relied on to make them instantly relatable/understandable to the audience. And in a sense, the same can be said of Kronk. He’s a big, strong guy with a brain the size of the pea. Or is he? This dude has layers. He’s a big kid (and great with kids), loves food, and has a way with animals. Though he is devoted to Yzma, he doesn’t let her overcome his final moral code: no killing.

One of my favourite moments in the film is when Kronk convinces Yzma there’s time for dessert and coffee before getting on with their evil deeds. Right there is a friendship worth keeping.

Kuzco: Political correctness is for wimps

Meanwhile our so-called protagonist (sharing the limelight with everyman Pacha), Kuzco is an ass. Just as Yzma’s character trajectory could have taken a very different path, as could Kuzco’s. It becomes a story of redemption and change as Kuzco learns to put others before himself, but we never forget that he really, truly, was an utter dick. No, really, the writers did not hold back. And thank god, no wishy washy, ‘oh, he doesn’t get social cues’ or pandering to ‘he’s really a good guy underneath it all’, Kuzco could go either way up to the final scene. 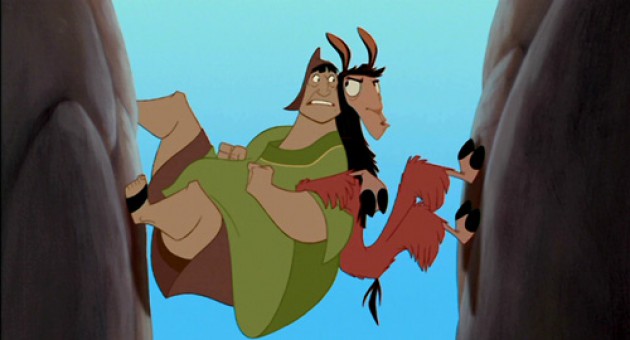 He feels no shame in acting the way he does and holding questionable opinions – behaviour that is obviously an arrogant, prejudiced view of the world to the viewer. On more than one occasion he insults peasants simply because of their social status. When Pacha asks him to compromise, Kuzco flatly refuses, claiming he does not make deals with peasants. He gives Yzma the most obnoxious firing in the history of ‘you’re fired’ scenarios and goes back on his word with Pacha multiple times.

Yes, the guy’s a dick. But as his unlikely friendship with Pacha builds, the village man rubs off on his emperor and Kuzco grows to be a decent human being. This story of redemption manages something very few similar films do: it feels real.

Oh the meta-humour of it all! 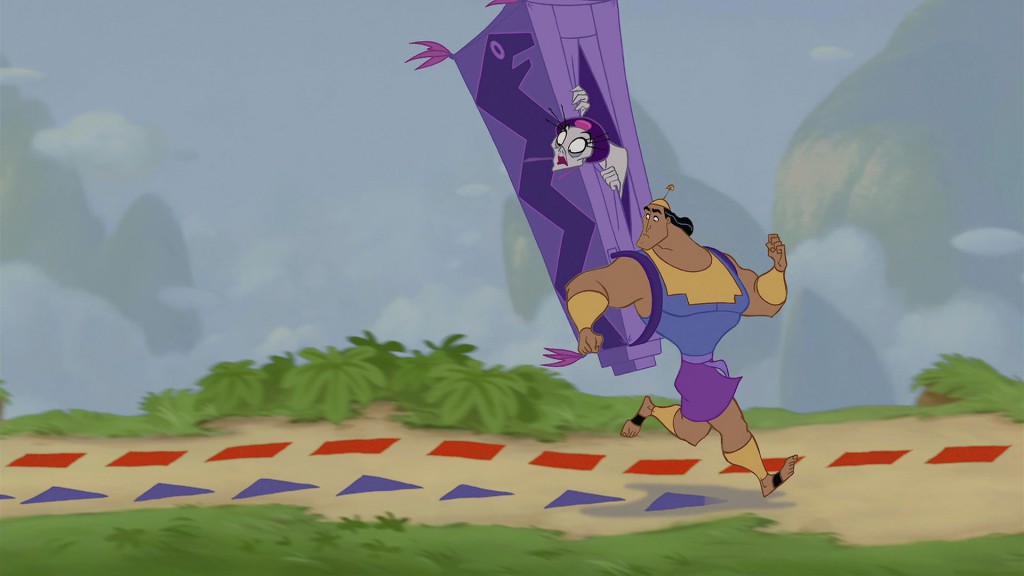 If all this still isn’t enough to convince you that The Emperor’s New Groove is one of Disney’s greatest masterpieces, perhaps the meta-humour will be what nudges it ahead of other, safer films. The Emperor’s New Groove breaks the fourth wall, with Kuzco narrating his own story, talking to himself within the story, and commenting directly to the audience.

If that weren’t enough, the film constantly reminds you that you are not only watching a film, but an animated children’s film and brings attention to the tropes of that very genre. For instance, when Kuzco and Pacha find themselves tied to a tree in a river, they acknowledge the inevitability of falling over a cliff onto a lot of rocks. Similarly, to indicate the journey of the characters across country, the film shows us a map with arrows showing their paths… only to cut back to them actually traversing the area and seeing the same marks on the paths in front of them.

The Emperor’s New Groove is hands down one of the best Disney films ever made and is sadly overlooked most of the time. Let’s change that!

Previous: The films that never were…
Next: Kindred: There are so many interesting times we could have visited