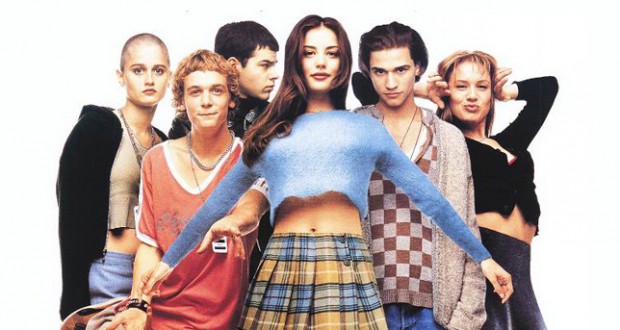 Last week I went ice-skating. I haven’t been for years and I’ve missed it – the skating itself I’ve missed, the rowdy youths not so much. What I noticed while I was there is that the 90s have apparently come back in fashion. Of course, my first thought is ‘WHY?!’ The 90s were not the height of fashion… and yet, I saw kids with high-waisted jeans, short shorts, and midriffs. What’s that about?!

The time warp created at the skating rink combined with my recent Will Friedle withdrawal I’ve been experiencing after my recent Boy Meets World re-watch, I felt nostalgic for some 90s teen films. Googling Friedle (yes, I still Google cute boys at my age – I don’t think I’ll ever be too old for that sort of behaviour), led me to a 90s teen film starring Friedle and Jennifer Love-Hewitt, Trojan War, that I had never seen before (or even heard of). Turns out there was probably a reason for that, it’s not great (despite Friedle still being unbelievably cute). But it did make me want to revisit some of my old favourites in the not-so-critically-acclaimed category.

I have already argued in defense of smart, funny teen films that hold up after years of re-watching, but what about those of lesser quality? Sometimes, I admit it, I can be a snob. But a bad teen film can sometimes get by my snob barrier, especially if it was produced in the late 90s.

Where’s the fun in only watching ‘good’ films, I ask you?

This film is fun, though it delivers nothing that any other teen (high school or college) film does. The characters all fall into nice little stereotypes and behave in the way they are expected to: jocks, prom queen, geeks, brainy, awkward loners, wiggas, and so on. Despite its total cheese-ball-ness and clichés, the film works, mostly a result of Ethan Embry’s likeable protagonist.

Where would teens be without the classic makeover films? She’s All That manages to poke fun at its genre while still falling into the same old clichés. Not that I mind too much though. Between Freddie’s smile, Usher’s dj-ing, and Kieran Culkin’s geeky brother routine, there’s enough here to keep me coming back.

Campus hottie Zack (Freddie Prinze Jr) is unceremoniously dumped by his hot but vapid girlfriend, Taylor (Jodi Lyn O’Keefe). Determined to keep up appearances, he accepts a bet from his friend Dean (Paul Walker) to turn any girl (of Dean’s choosing) into the prom queen. In comes Laney Boggs (Rachel Leigh Cook), artistic weirdo with messy hair, an odd sense of style, and big glasses. With a bit of scrubbing up, would you believe it, Laney turns out to be super hot and Zack quickly finds himself head-over-heels. But will things work out for the young lover?! Ummmm, I’m sure you can guess the answer to that one!

Makeovers aren’t just for girls, oh no, this here film has a girl making over a boy. And who says there’s no gender equality?! Back when Melissa Joan Hart was the teen girl and Britney Spears first made it big, we were all drooling over Adrian Grenier in this cheesey film. Personally, I loved that it was a boy-next-door tale, not a girl-next-door one.

Nicole (Melissa Joan Hart) wants a jock to take her to the prom, but the boy of her choice is after a cheerleader instead. Meanwhile, Chase (Adrian Grenier) is dumped by his alternative girlfriend. Chase and Nicole are next door neighbours but they exist in completely different social circles. Nicole, however, sees an opportunity to turn Chase into the perfect prom date. But not to actually take him to the prom, that would be far too logical – they plan to ‘date’ each other to make their respective lovers jealous.

Worst bit: Their parents hooking up

Teen films (and TV shows) have often been filled with actors in their 20s and 30s portraying high school kids, leading the rest of us to scoff at them looking completely unbelievable as high schoolers. Never Been Kissed plays off this idea, having a grown-up Drew Barrymore go undercover at a high school. Although she might be a career woman now, back in high school she’s just as uncool as ever. I like to watch this film as a ‘how to’ for being popular – and trust me, the same rules apply outside of high school too (as sad as that is).

Josie Geller (Drew Barrymore) is a hard-working but underachieving journalist at the Chicago Sun-Times. She is sent to high school to do an undercover expose on what kids get up to these days. As soon as she’s back in high school, her ‘loser’ status is achieved. But hanging with the geeks isn’t going to get Josie the juicy stories. Her brother Rob (David Arquette) joins the high school as well, telling Josie that all she needs is one person to think she’s cool and she’s in. He’s right. She immediately shoots to popularity and scoops the story of her life.

My Date With The President’s Daughter

Ok, so admitting that I ever loved this movie, let alone still love it, is probably social suicide (you know, for those who had social lives to begin with…). But hey, this is my list of not-so-cool teen movies that are fun, so this one has to make the cut. First things first, it stars Will Friedle. And despite the ridiculous long hair, he’s still the cutest thing to appear on screen, like, ever. It’s one of those classic tales of two kids from totally different worlds falling for each other. And while the dialogue isn’t snappy or the fashion trend setting, it’s a whole lot of fun. It never pretends to be anything other than what it is – a silly teen film.

Duncan (Friedle) is a magic trick-loving geek who promises his mates he can get a date for the school dance that night. He happens into Hallie (Elisabeth Harnois) at the mall and is thrilled that she wants to go to the dance with him. Only problem is, Hallie isn’t your typical girl – she turns out to be the President’s daughter. And like any girl who is kept a close eye on 24/7, Hallie is desperate to let loose.

Best bit: Will Friedle. He should be in every movie ever. Not that I’m in the least bit obsessed. What, me?! Never!

Worst bit: Well, this is truly corny stuff. It is a Disney Channel movie after all, what can you expect?!

I saved the best one for last. I’m not sure why this film gets left off most lists of great teen films, because it is one of my favourite films of all time, not just in the teen genre. It’s funny, irreverent, relatable, and weird. The cast of characters are all oddballs, even the ones you think are typically perfect princesses. Combine great characters with an awesome soundtrack and you have movie magic. Not to mention Liv Tyler, Renee Zellweger, and Anthony LaPaglia.

At local record store, Empire Records, the boss finally lets Lucas (Rory Cochrane) close up the shop. Big mistake. Lucas takes the money to Atlantic City and loses it on a bad bet. But the staff at Empire are more like family than colleagues, with boss Joe (Anthony LaPaglia), covering for Lucas. Meanwhile, the store is taken over with Rex Manning (Maxwell Caulfield) fever. Can the friends survive the day and save the store?

Best bit: ‘Who know where thoughts come from, they just appear.’

Worst bit: Honestly, I love the entirety of this film. The worst bit is that it ends!

Previous: Women in Hollywood: Protagonists, actors, and directors
Next: The death of the album and the rise of the playlist