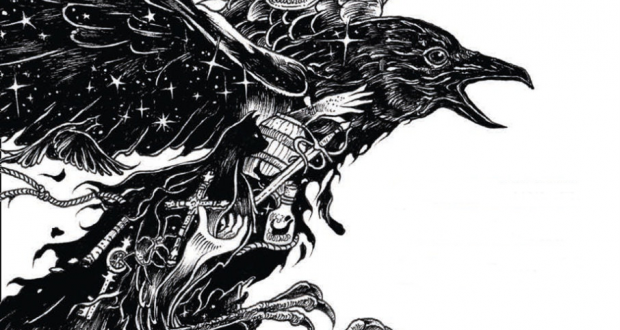 If there were ever a novel to have strong feelings about, this is it. I’m angry at this novel, disappointed by it, frustrated with it, and sucked in by it. The prose is so obnoxiously purple I want to wring the author’s neck. There are so many plot holes and contrivances that even if you make it past the self-indulgent writing style to the end of the narrative, you will be left utterly unfulfilled. And yet, once I’d pushed past the arrogant, showy opening, I found myself pulled along by the story. If anything, though, that made it worse. There’s a lot to like in Nevernight, which makes it such a shame that Kristoff was determined to bury it amongst the bullshit.

I know, this all sounds very harsh. I don’t set out to write incendiary reviews; my intentions aren’t to alienate people in the industry. But in all honesty, I would not have pushed past the second chapter of this book if I hadn’t been reading it to review. It did get better… eventually finding its feet and pulling me into the characters and their story, but all that potential is squandered. If it had had no merit at all, I probably would have gone easier on it. But Nevernight is one of those most frustrating of books – hinting at something greater, but ultimately failing to deliver anything worthwhile.

‘Despite what your poets might say, gentlefriend, it takes a mighty swing and an even mightier arm to decapitate a man clean.’ 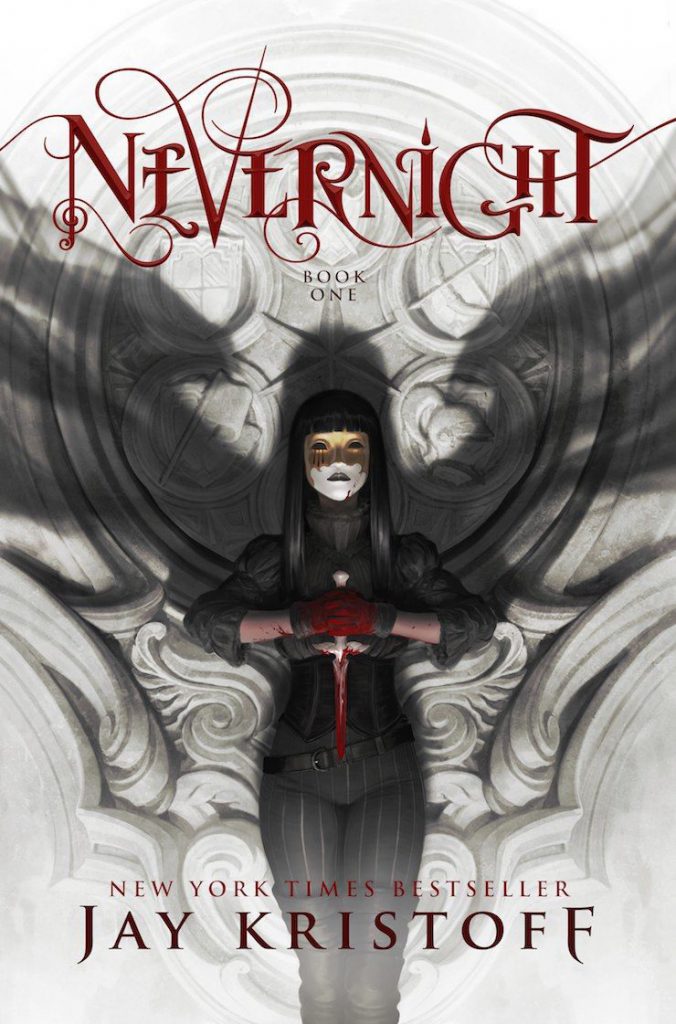 Where to begin? The novel is framed by a historian narrator. This framing serves no purpose for the story other than to introduce irritating interjections and archaic phrases (‘atop’; ‘O so very strong’; ‘but mother’s eyes were affixed’; ‘Call it what you will, gentlefriends’), along with a plethora of footnotes. Yes, that’s right, footnotes. This can be done well, Mark Haddon springs to mind as an example of someone working with this kind of style in a less infuriating manner, but Kristoff’s approach is just another example of his self-indulgence. Here is a writer who feels he knows his craft better than others, and he’s here to prove it to you.

While Kristoff might have great faith in his own brilliance, he doesn’t share such high esteem with his readers. Just in case you couldn’t pick up on the entirely unsubtle mirroring of stories in the side-by-side sections (the ‘present’ and flashbacks), the author repeats the exact phrases in each one to different effect. It might have worked once, maybe even twice, but quite so much repetition is tedious and condescending to the reader. This repetition of phrases and even entire scenes carries on throughout the novel, though thankfully to a lesser extent after the first few chapters have driven even the most tolerant readers running for the hills.

‘To call her pretty was to call the typhoon a summer breeze, or the three suns a candleflame.’

If all of that weren’t obnoxious enough, the author is in love with figurative language. A little bit of purple prose is always welcome, it adds flavor to otherwise dry language. But Kristoff takes this too far. I defy you to find a paragraph in this novel without at least one simile or metaphor. Go on… I’ll wait. Here are some of my, *ahem*, favourites:

‘His slap whipped her head to one side, dark hair flowing like tattered ribbons. And before Mia could blink, her mother had drawn a long, gravebone blade from her sleeve, its hilt crafted like a crow with amber eyes. Quick as silver, she pressed it to the Consul’s throat, his handprint on her face twisting as she snarled.’

‘The moved like first time lovers – hesitant at first, drifting closer until finally they fell into each other’s arms, fists and elbows and knees, block and counters and strikes. The sigh of steel in the air. The wet percussion of flesh and bone.’

And if all the over the top flowery language weren’t enough, the number of times these descriptions rely on cliché makes the book irredeemable. ‘The Sky is crying.’ I mean… really? It feels like the work of someone just starting out, throwing every possible descriptor at the narrative. Not only does the prose feel laboured and heavy-handed, I have to wonder where his editor was? And the pages and pages dedicated to Mia’s sexual exploits? The novel well deserves a nod in the Literary Review’s Bad Sex in Fiction Award.

‘He was the kind of beautiful that dimmed all the world beside him.’ 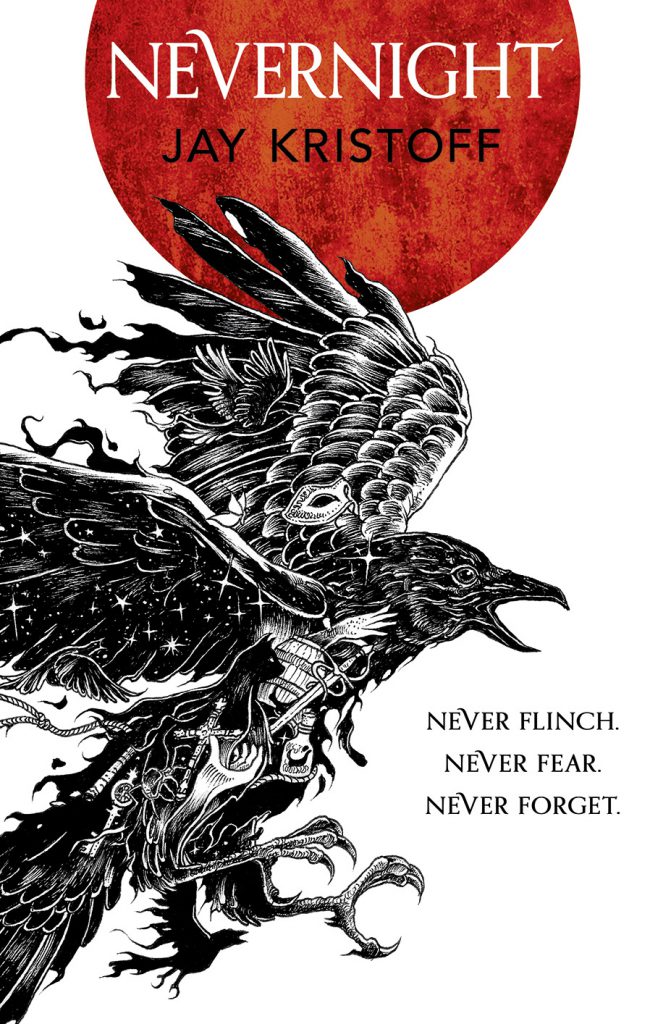 If you find yourself able to move past the dire writing style, be prepared for lackluster and undercooked characters and plot. There’s nothing particularly original about the narrative – a young girl seeking revenge on the people who murdered her family seeking out a school of assassins to train her. Unfortunately, the nature of her father’s rebellion or those she is determined to kill is never fleshed out and so rarely mentioned it hardly works as Mia’s driving force. And instead of making the villains remotely interesting (as far as I could tell, they have nothing much going for them other than being surrounded by guards), Kristoff relies on the most basic, moustache-twirling depictions to elicit the reader’s hatred (and is not even embarrassed by it): ‘…the Justicus might be a courageous sort when murdering kittens and throwing children into the canals, but it seemed when plans went astray, so did his desire for confrontation.’ Another of Mia’s ‘marks’ is also nicknamed ‘puppy killer’. Umm, yeah, I wonder how he wanted to reader to feel about that bloke…

Mia is an infuriating character, never acting in a realistic manner. My biggest issue with her is her lack of understanding of and drive to understand her power. She has the ability to talk to shadow creatures and manipulate shadows to her will. Despite knowing very little about this power, she doesn’t work hard to master her power or feel particularly driven to find out more information. I was crying out for Hermione, wanting this girl to have even a spec of desire to know.

‘The tattoos on his face were the ugliest she had ever seen, looking like they’d been scrawled by a blind man in the midst of a seizure.’ 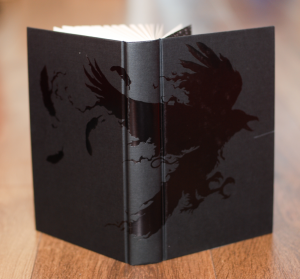 To make matters worse (I know, you didn’t think it was possible, did you?!), there’s an entirely unearned ‘twist’ towards the end. Not only does it come out of nowhere, Kristoff spends the next few pages trying to justify the twist, repeating sections of the novel that appeared earlier, as though the reader were too dumb to pick up on his ‘subtle clues’. He might think those clues are enough, but I’m afraid it very much felt like a ‘because plot’ moment. Then, ‘because plot’, he must have Mia discover the treachery… from the most ridiculous leap in logic imaginable.

The novel wraps up with coincidences, plot holes, contrivances, and utter ridiculousness. One so awful that the author acknowledges it – in a way – but writes it off as a quirk of the character’s nature. Puh-lease.

Verdict: Nevernight is simply awful. Elements of the story show promise, but the execution is woeful.

Previous: 10 storytelling lessons to learn from The Last Witch Hunter
Next: What we know and what we want from Star Trek: Discovery