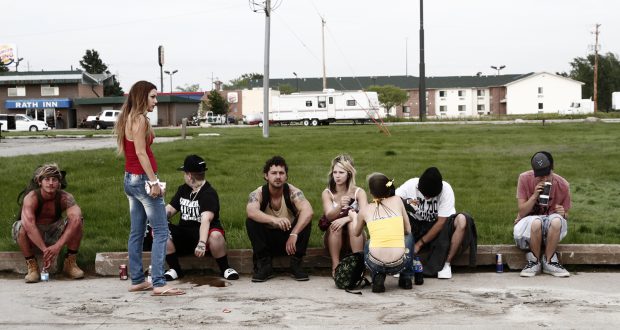 Movies about self-centred, materialistic, vacuous dolts run a fine line. I’ve never been one to advocate that the subjects of films need to conventionally sympathetic but without some sort of critical observation of such figures, a filmmaker runs the risk of either celebrating such crassness or vacantly presenting it. American Honey runs this gambit and for all its promising start, the film amounted to a frustrating and pointless endeavour.

Let it not be said the film has no virtues. Though I may look back in displeasure at the film overall, I never once questioned the naturalised performances of the cast. Sasha Lane is a very fine lead and I say without a jot of irony that I have nothing to complain about in Shia LaBeouf’s performance. A lot of remaining cast were in fact recruited by trawling the streets for idle teengers who do a really good job of acting as dispossessed youths of the American flyover. It just makes it all the more unsatisfying that a really strong cast is abandoned to the thematic and structural non-entity that is American Honey.

The potential of the start is utterly squandered 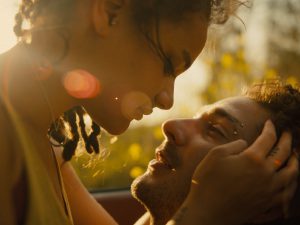 The plot follows Star (Lane) who leaves the literal and emotional squalor of her home life in Oklahoma City when the flirtatious Jake (LaBeouf) lures her into a magazine-selling racket of teenage dropouts. The opening has firm foundations as it sets up the only consistent and redeeming through-line of the film: the horror of being poor. Lane has to support her two younger siblings and hopelessly defend herself against the depredations of her abusive father, the economic depravity she lives in trapping her in this miserable state of affairs. Her obsession with scoring some cash, the similarly bleak buck-chasing attitude of her compatriots in the magazine outfit, and the harshly felt divisions between their backgrounds and the big houses they solicit underscore the film.

Director Andrea Arnold seems to make a bold promise with this opening and one must assume that it won the basis of this promise that she that won the Prix du Jury at Cannes. Does American Honey deliver an eviscerating social commentary about the economic isolation in the big empty middle of the USA, on how a generation has been left with no prospects, on how the quest to earn some cash is as demeaning as going without. Does it, hell. This limp, indulgent, directionless pretender of a film is more significant for its ability to squander my goodwill. All unending 160 minutes of it.

Like being stuck in a van with a bunch of idiots, which also describes 70% of the runtime 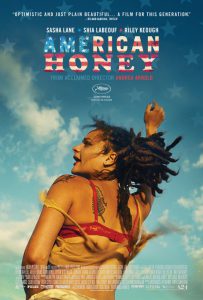 If the plot structure of sub-fratboy stoner conversations, morally dubious interaction with homeowners, and jealous sexual encounters could be found to provide any meaning, replaying it with minor variations three or four times does not strengthen it. The film wears one down with its repetition. Indeed, the point may be that life for these teenagers has been a monotonous cycle of events but the point was made early: where is the virtue in beating this dead horse. And for all the posturing towards some ‘meaning’, there’s no excuse for using the cliché that teenagers are impetuous and hormonal to justify bad plotting. The characters regularly act stupidly in such a way as to deeply undermine their motivations or are called upon to be far more naive or obtuse than is reasonable to facilitate the hackneyed dysfunctional romance.

American Honey reminds me of the two ways that the writer Bret Easton Ellis has been adapted to cinema. You have the Mary Harron route where you take American Psycho and invest your film with a perspective, irony and criticism that is sorely lacking in the source material. Or you go for the approach that actually involves Bret Easton Ellis in the production, a la The Canyons or The Informers, where the film turns out to be as pointless as the shallow individuals with whom the writer is obsessed. American Honey is firmly in the latter category. It struggling to say anything of substance.

Verdict: American Honey is a shallow film pretending it has some depth.

Previous: The fallacies of YA fiction
Next: Paper Girls: Newspapers, Walkmans, and time travel