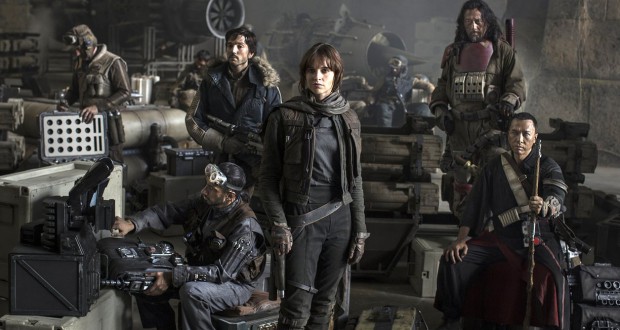 The positive reviews started flooding in, giving me hope – but I’ve been burned before and I’ll be burned again. Are these critics seeing the same films I’m seeing? Rogue One is yet another example of what is wrong with bloated Blockbuster Hollywood films. It’s all flash and no substance. There are plenty of big action set-pieces with explosions and classic Star Wars vehicles and weapons, but the story itself is weak.

When I first heard that Rogue One would feature the story of the rebels who stole the Death Star plans, I was excited. That seemed like a great story to tell as a spin-off from the main films, especially to explore some of the inner machinations of the rebellion. And throughout the film, there are hints of fascinating narrative threads that go nowhere, are forgotten about, or wasted with poor follow through. Instead, the focus is given to Felicity Jones’s Jyn Erso so that the big-wig studio execs can say ‘The protagonist’s a girl!’ Unfortunately, she is as underdeveloped as she is bland. 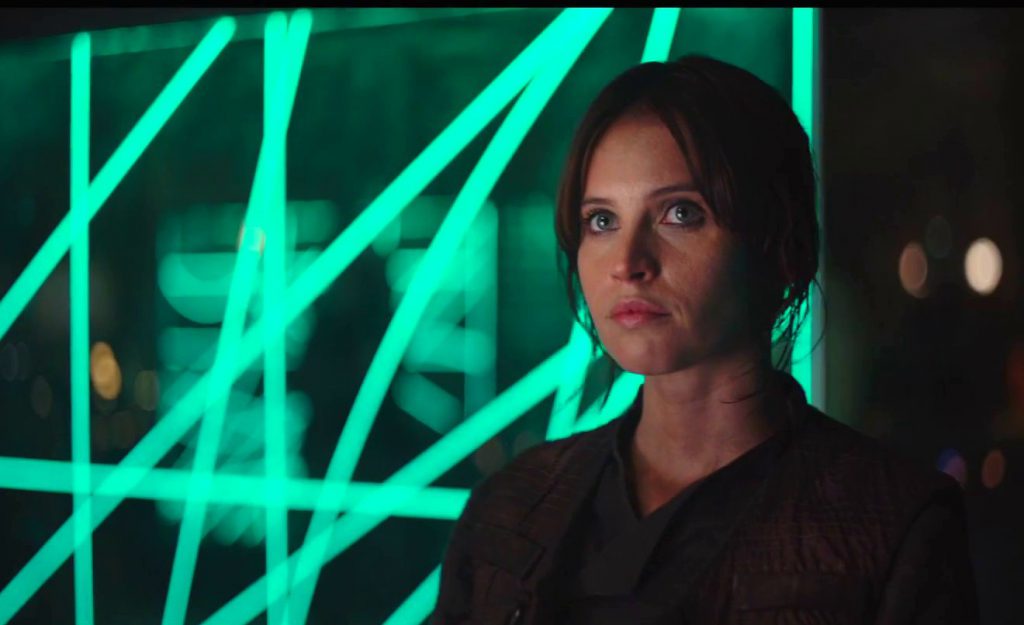 Rather than having the story pulled along by a motivated protagonist, Jyn is someone that things happen to rather than making them happen herself. She has rejected the life of rebellion and political activism for a pointless existence as a common thief (at least, that’s what the clunky dialogue tells us). Despite witnessing the Empire’s terrible deeds, she remains unmoved to help the resistance. The change in her position feels like a giant 180 with the barest of motivation – after all, the inciting incident to her motivational drive is really just more of the same/what she’s experienced for her entire life.

Supporting Jyn in the narrative is an extensive ensemble cast. There are some characters with great potential amongst them but there are far too many and none of them are given adequate depth. Cassion Andor (played by Mexican actor Diego Luna) is presented as a dark, tortured soul (and is definitely hot enough to be Han Solo, aka sex god, for the new generation of Star Wars fans). But we aren’t ever given any elaboration on this – he has had to kill and be Machiavellian in his actions to support the rebel cause, but is there anything more to him than that? I feel like there was meant to be, but they certainly didn’t devote any time to establishing it in the film. Meanwhile, pilot Bodhi (Riz Ahmed), is another potential for interesting character development that is wasted. Here is a pilot for the Empire that defected – he has risked everything to deliver a message. But why? Sure, Finn’s similar story in The Force Awakens was delivered simplistically but at least the audience were given something to understand his decisions. 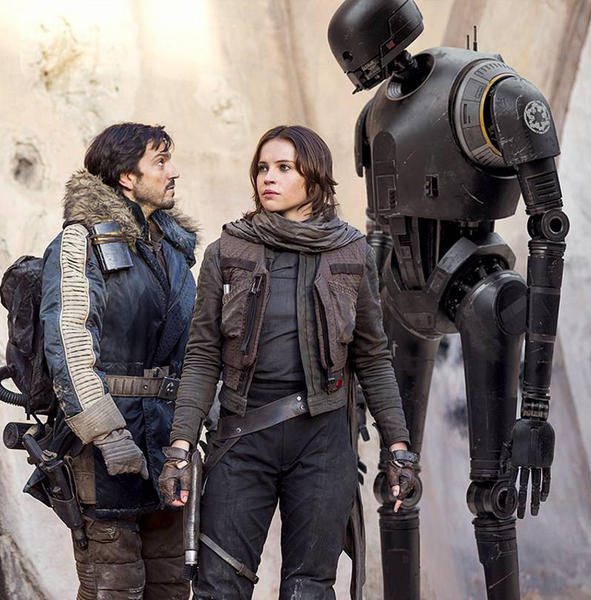 The original Star Wars film approached the storytelling format in an interesting and new (for then) way: having the droids being the interconnected pieces to the larger narrative. After this worked well and R2-D2 and C-3PO found a solid fan base, the subsequent films have decided that all Star Wars stories require comic relief from droid companions. The Force Awakens introduced the cute BB-8 (aka the merchandising dream) and Rogue One gives us K-2SO, a reprogrammed Empire droid voiced by the fabulous Alan Tudyk. While he is amusing at times and has a personality distinct from the comedic droids that have come before him, he adds little to the film. Worse, the film uses him in a role that would have been better served by the duo of Chirrut (Donnie Yen) and Baze (Wen Jiang) – and if the filmmakers had devoted the time to these two, we could have explored some fascinating ideas around how the guardians of a Jedi temple continue to exist openly under the Empire’s reign (amongst other narrative threads).

Not everything was so entirely underwhelming. The set and costume designers worked magic in making the look and feel of A New Hope come to life again. I especially enjoyed the 70s-inspired facial hair of many of the characters, giving it added charm. There were plenty of nods to the original, with the rebel base at Yavin 4 being a spot-on replication. However, these nostalgic, fan-serving moments quickly became overdone. From having Cornelius Evazan and Ponda Baba (yes, you know who they are… ‘You just watch yourself. We’re wanted men. I have the death sentence on twelve systems!’) appear amongst a civilian crowd to the overuse of terribly uncanny-valley CG to recreate Grand Moff Tarkin (and another character that I won’t spoil for anyone), and re-used footage of rebel fighter pilots from A New Hope, the film is far too concerned with pandering to fans of the original trilogy. Rogue One is a story set in the same universe but not part of the main canon – this was the perfect opportunity to try something different, make a statement, and give us a truly original Star Wars story. 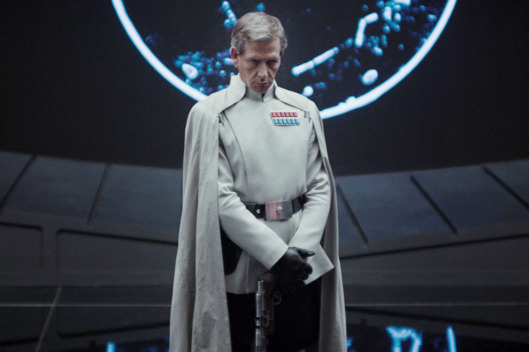 Rogue One is a story of missed opportunities and blunders. It is always tricky to make films tie in with existing stories, especially ones as well known and beloved as Star Wars, but some of the plot points in the film end up ruining elements of the original (the Death Star’s weakness was a deliberate sabotage, not just hubris of a massive evil empire, for instance). There are some great actors who are wasted (will someone give Jimmy Smits something awesome to do one day? He’s too cool to be wasted this way by Star Wars), solid character actors who continue to deliver, and a central performance so wooden I wondered if perhaps Gareth Edwards had been replaced by George Lucas without anyone knowing.

Verdict: Dull and clunky, Rogue One consistently misses the mark despite the potential for greatness embedded within. Coulda-shoulda-woulda.

Previous: Nimona: A villain with a vendetta and a shapeshifting sidekick
Next: The art of writing a book series