Home / Film / Baby Driver: That’s all the music you need 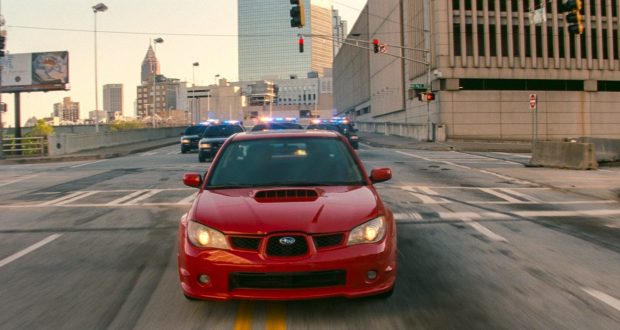 I’m so glad this is the first film I saw after slogging through Transformers. Nothing cheers you up like an Edgar Wright film. The director has been chronically underappreciated over the years. The fact that we will never see his version of Ant-Man is an immense tragedy and I still cannot fathom why his brilliant adaptation of Scott Pilgrim vs The World didn’t find its audience. I hope to god that Baby Driver finds the success it deserves because it’s a really good film.

I’m aware there’s a propensity of film critics to focus on the more niche and technical aspects of film-making when most audiences just want to know it’s a good story with memorable characters and decent set pieces. There’s no such division of sensibility with Edgar Wright. Most reviews will be talking about the use of diegetic music and Wright’s typically well-choreographed and snappily-edited scenes. The fact is, these techniques are always in service to plot, tone, and character. The film oozes style but this is never a substitute for substance.

Given the aural butchery of Suicide Squad, it’s nice to see a soundtrack implemented properly 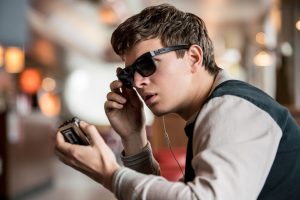 The plot follows Baby (Ansel Elgort), a reluctant but brilliant wheelman who has debts to pay off to criminal puppetmaster Doc (Kevin Spacey). Baby has tinnitus so plays songs through his numerous mp3 players, which overlay the action throughout the film. As with so many works by Edgar Wright – who is writing and directing – he is playing around with the crime caper genre so as much as this film does have a clear heritage, it never sticks entirely to the formula. The plot and character dynamics twist in interesting ways that I did not always see coming, and the film builds tension very deliberately for some crucial scenes.

It’s also interesting for its use of violence and, come to think of it, Wright has always avoided the crass trivialisation of violence in his films. Shaun of the Dead only permitted it against zombies, Hot Fuzz in very specifically non-fatal circumstances which were undercut by satire, The World’s End against alien robots, and of course, Scott Pilgrim was deliberately cartoonish. In this case, Baby is not down with violence but finds himself working with violent and dangerous criminals. He’s in a situation he does not want to be in and does not approve of hurting people. As such, Wright goes out of his way to conceal a lot of the bloodier action but we often see the consequences after the fact. The threat and aftermath of violence remain a lingering threat which is hanging over the film until the end. I can’t remember the last crime film where the violence actually still had an impact and human cost rather than just being nonchalant action. 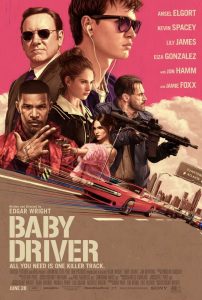 And can I just say, to remount my old soapbox, bless the lord this film was edited properly. I don’t have to sit here and complain about dopey scene transitions, or nonsensical high-speed, choppy editing. When the big car chases arrive with their rapid cuts, you are still able to tell what is going on. There’s no trade-off between frenetic pacing and clarity as with so many blockbusters. And Baby Driver also features shots of drastically varying length to suit the needs of the scene! Who knew people did that anymore? So we don’t have to have conversational scenes edited like a firefight. Oh, I am being spoiled.

All told, this is a love letter to good film craftsmanship and even if you don’t slobber over cleverly choreographed one-takes with a witty use of a diegetic classic pop soundtrack, you’ll surely enjoy a well-acted, funny and remarkably tense crime caper. Elgort and Lily James are endearing leads, Spacey is on form, Jaime Foxx is an intimidating and psychotic presence, and Jon Hamm (who I wish we got to see breaking out his John Draper schtick more often) gets an interesting arc. I have no grounds to bitch about Baby Driver at all.

Verdict: If you don’t like Baby Driver, stop watching films.