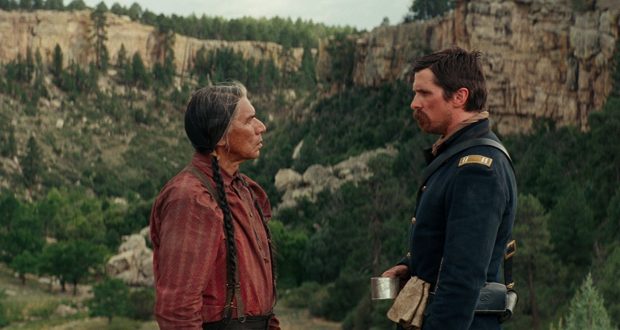 I am sucker for a good western. Something slow-paced that can move easily between quiet moments of reflection and outbursts of searing brutality. The frontier is also a rich setting for conflict. Hostiles could have drifted into dangerously old-fashioned territory with its focus on Native American-Settler warfare (something modern westerns tend to avoid as a main theme), but rather than being a nostalgic and racist kill-the-Injuns story, Hostiles turns out to be a very well-made film about reconciliation in a bloody landscape.

Hostiles concerns three individuals. Rosalie Quaid (Rosamund Pike) is the survivor of a Comanche raid whose family was murdered. Captain Joseph Blocker (Christian Bale) is a renowned cavalryman and hunter of Native Americans. Chief Yellowhawk (Wes Studi) is an imprisoned Cheyenne war leader. The chief is dying of cancer and has been granted compassionate leave to return under escort to his homeland. His escort will be led by his erstwhile enemy Blocker, whose party quickly stumbles upon Quaid. The three must then travel, despite their own antipathy and the hostility of nearly every other party they come across, back to Yellowhawk’s home.

A conflict between cynical experience and untested idealism

As much as this film does centre on some very bloody action and the legacy of violent men, Hostiles is a hopeful film. (Which is perhaps a tragic irony in the overall historical context). It is about people with grievances, deeply felt grievances, finding common ground despite themselves. It doesn’t offer mawkish easy answers or platitudes though. Most of the liberal Americans who want to see the Natives treated well are depicted as naïve and unexposed to life on the frontier. By contrast, the soldiers and frontiersmen are experienced but trapped in fruitless cycles of violence. Escaping and confronting these cycles is no easy task but it is the fundamental challenge all our characters must go through.

The plot (and cast for that matter, with Christian Bale and Ben Foster) do bare a passing resemblance to the James Mangold remake of 3:10 to Yuma. Hostiles arguably offers better use of Bale who excels more here without his sometimes-over-earnest demeanour. Performances are strong-suit of the film. Bale’s Blocker is full of loathing but a figure of utmost conduct with (white) woman.  Pike’s grieving wife and mother does a very good job of depicting a traumatised psyche without slipping into hysteria.

More development of the native characters would have been nice 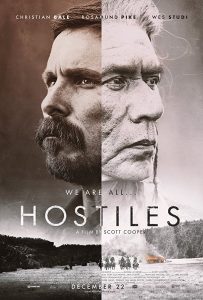 Hostile’s main weakness is that it is less of a triple header than it pretends to be. Blocker is the main character, Quaid the next biggest main role. Yellowhawk is pivotal to events and has some important scenes but does not figure so much in the drama consistently. Furthermore, the character arcs are mainly attributed to Blocker, his unit, and Quaid. Yellowhawk seems more resigned to his fate and his innate pragmatism sees him much more willing to work with Blocker to survive than the other way around. As a result, he has less to overcome than his rival. Having said that, we definitively avoid cod-spiritualist noble savagery in the Native American characters, members of Yellowhawk’s family are given equal prominence to the rest of the supporting cast, and Wes Studi’s character is a strong element of the film even if he is not the focus.

Hostiles is a fairly traditional western. I don’t think it offers any surprises, especially to someone well-versed in the genre. You know the kinds of interpersonal conflicts that will crop up, the sorts of hazards the party will have to face down. It is a case of thing done well though rather than a thing done new. As much as it is familiar, the film does have heart and communicates its message well. It is paced, acted and shot effectively whilst also having something to say about trying to find peace in a land soaked in blood.

Verdict: A well-crafted western about people struggling against a history of hate.

Previous: Appreciating art without contextual bias
Next: Genre Fiction and the Middlebrow