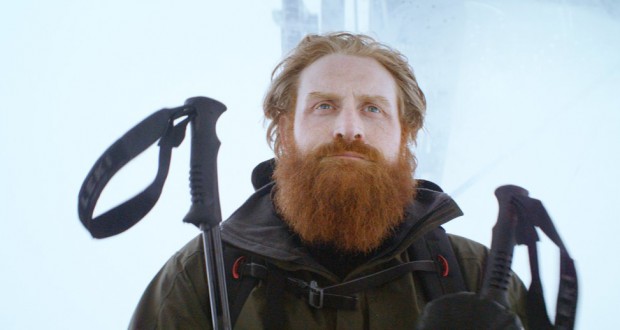 A Swedish family, holidaying at an Alpine ski resort, eat lunch on a restaurant’s balcony overlooking the slopes. As they settle in, a controlled avalanche hurtles toward the resort. The crowd at the restaurant panics and as mother Ebba moves to protect her children, father Tomas scrambles to save himself. When the avalanche terminates harmlessly at the base of the resort, merely tossing up a screen of snowy mist, the family is left to deal with the implications of the parents’ actions.

Force Majeure is by Swedish film-maker Ruben Östlund and is (believe it or not from that description of the set up) a dark comedy of sorts. It’s a twisted experience and worthwhile one, certainly highly recommended if you thrive on nervous laughter and awkward situations being skewed by comic interruptions. 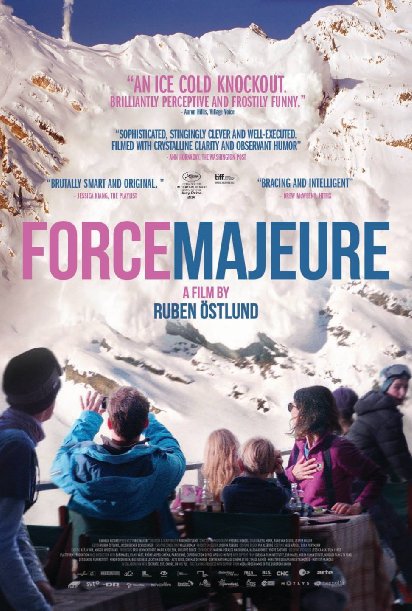 First things first, I have never been skiing. That might not seem like the most relevant qualification for the review but the fact that this ski resort seemed weird as hell to me might have less to do with the bizarre micro-community I initially perceived Östlund to be creating, and more to do with just how weird ski resorts are. I wouldn’t know either way.

Of course, any place built to accommodate the inhabitants hurtling down snowy mountainsides on planks is not going to be normal. However, Östlund’s resort is a place where nominally wholesome families go to relax alongside louche swingers, soused divorcees, and thuggish ravers. It’s a place of blissful tranquillity until the explosive sound of the air blasters shatters any illusion of this being a naturally maintained or peaceful environment. Where the staff candidly stand and smoke, revelling in the guests’ misery. Is this normal for ski resorts or is this the twisted world the director creates for the film? Clearly there’s too much alcohol flowing at that altitude, in any case. Won’t somebody think of the children?!

The weighty and serious is elevated to the funny

As you can gather from the weird entourage of supporting players listed above, the film intertwines its rather sobering dramatic thread with the ridiculous and almost surreal. The married couple begin to confront some major differences between each other and this is a deep rift in their marriage, but trying to fit in several hours of skiing each day to legitimate your holiday even as your family fractures is realistically absurd.

The director frequently uses bathos, as the weighty and serious is elevated to the funny by some sort of context, interruption or even the music: Vivaldi’s energetic ‘Summer’ anticipates a new day of action, inevitably followed by a lugubrious ascent up the slope.

The best example of this bathos is the dinner party, when Tomas and Ebba have Fanni and Mats over for an evening and the social occasion becomes an opportunity to pressgang the guests as jurors for the couple’s grievances. The simmering tension and uncomfortableness is palpable and then unwinds as Mats’ nosiness and wine-fuelled philosophising injects levity into the dour proceedings. And then there’s a shocking and inventive sledgehammer to the scene that had the audience in my screening rolling with laughter.

I’ve previously reviewed films where I’ve complimented the mutability of the tone but I think a different but equally sophisticated operation is going on here. Though pacing and funny razor-edged quips break up the stretches of more po-faced drama, ultimately Östlund has the emotional responses overlapping. The couple’s turmoil can be sad, frustrating, pathetic, amusing, ridiculous and even hilarious at the same time. Tomas stretch of blubbering like a baby is a particular peak of both misery and elation for the viewer.

The film has a restrained style for the most part but does mix it up with some dynamic skiing sequences and a few unexpected touches which I leave to you to discover. Ultimately, the film is carried by its sharp writing and the impressive cast. It’s solid across the board, and the child actors are especially convincing irritating children, but hands down my favourite amongst them is Kristofer Hivju’s Mats. Viewers may recognise Hivju as Tormund Giantsbane from Game of Thrones but he displays a range here that is not afforded him by the role as the belligerent wildling. Mats is endearing, affectionate, nosey, over-analytical, primordial and frequently has a few units in him. Among a very strong cast, he’s a standout.

Verdict: A great film about a family tearing itself apart on holiday. Skiing looks nice, mind you.

Force Majeure is currently on general release in the UK.

Previous: Avengers: Age of Ultron – Too many superheroes, too little time
Next: Nostalgic Impulse: To Kill a Mockingbird (film)