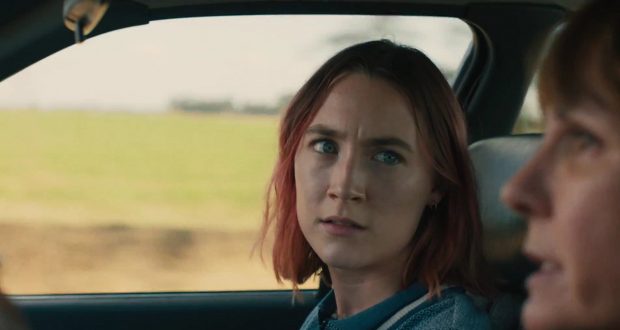 Of all the major awards contenders I have seen so far, this is easily one of the most assured and memorable. Lady Bird is being hailed as Greta Gerwig’s debut as director (she wrote the film too), but that feels belittling given her extensive work behind the camera to date. Having written, produced and co-directed previously, this is hardly the work of a talent still honing her skills. Lady Bird is very assured, on top of being funny, poignant and melancholic.

Lady Bird follows Lady Bird, a.k.a. Christine (Saoirse Ronan), who will soon be leaving high school and ideally headed to college. She has lofty ambitions to go to an East Coast college – ‘where culture is’ – but her middling performance at school will probably put an end to that. Her mother Marion (Laurie Metcalf) does her best to temper Christi- sorry, Lady Bird’s expectations and impress upon her what reality probably has in store for her. They aren’t rich, life isn’t fair, and Marion can’t offer her daughter the life she wants. Through the turmoil of college applications, flighty teenage friendships, and boys, Lady Bird and her mother have to work out just where she is headed in life.

As an established Daria fan, I am perhaps predisposed to love this film 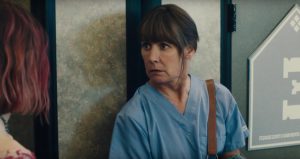 The teenage coming of age drama is not a new genre. However, Gerwig’s semi-autobiographical account of adolescent boredom in Sacramento (the Mid-West of California) punches well above the weight of so many indulgent angst-ridden dramas it could so easily be grouped with. Despite her associations to mumblecore movies, this is a taut and consistently engaging film, in which Gerwig doesn’t waste so much as a shot. There’s no reliance on stereotyping inscrutable hormonal teenagers or unreasonably overbearing adults. Lady Bird resists a future in California because she does genuinely understand how stifling her hometown is. Marion isn’t an lecturing harpy, she has the experience to help her daughter and is generally trying to help her. But their relationship is informed by passive aggression, resentment and a certain level of dishonesty. Whereas similar films often opt to idealise or caricature their subjects, Gerwig wins you over but hardly lets off Lady Bird and Marion for their numerous misjudgements.

Claiming a film feels ‘authentic’ can be follisome, because a film always takes a constructed stance. However, affected or not, Lady Bird really does sell you on the believability and truth of its world. Although Lady Bird and her mother are the focus – both actresses giving absolutely flawless performances – Gerwig’s strength is putting them in context. They are products of their environment. You really get a sense of their situation without overbearing emphasis. There are just details here and there reminding one that this is set in 2002. The phones, a poster reflecting very raw post-9/11 anxieties, listening to tapes in the car for a college road trip. It doesn’t constantly jab you in the ribs to remind you that this is Sacramento in the early noughties and pander to period nostalgia. All the detail and its measured use reeks of effort on Gerwig’s part.

Ronan and Metcalf should be shoe-ins for awards glory 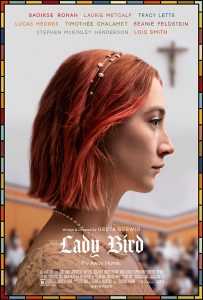 The whole approach is one of light touches reinforcing a personal story. This in turns speaks to universal themes. Just look at Lady Bird’s love life. Lady Bird is never a stand-in for some generic idealised teenager, but her experience of getting messed around by boys who need to figure themselves out, or falling for a pretentious condescending dick in band with floppy hair, or a supremely anti-climatic first time, are sorry experiences that many teenage girls have to face down. Her response is individual and personal but she’s dealing with crap, in one form or other, that is fundamentally relatable.

I cannot recommend Lady Bird enough. Its characters are genuinely complicated. Its setting is equally rich, mapping out all sorts of economic and social anxieties. It is thoughtful and makes you sympathetic for its characters but is never above criticising them for deluding themselves. Above all, Lady Bird is funny This is a film with something to say, and it speaks with insight and wit.

Verdict: Rarely is the struggle and trajectory of teenage life so well-captured.

Previous: Don’t Believe the Hype
Next: I, Tonya