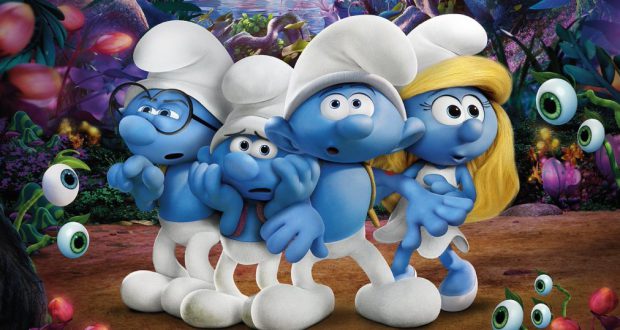 Today’s guest post was penned by Breaking the Glass Slipper’s co-host Charlotte Bond. Staying very much ‘on brand’ for the podcast, Charlotte looks at the misogyny rife in the latest Smurfs film outing. You can catch Charlotte regularly reviewing horror novels over at Ginger Nuts of Horror and find out more about her writing over at her website.

There have been many excellent kids’ films out recently: Zootropolis, Moana and Sing to name but three. Both Zootropolis and Moana feature a strong female protagonist and deal with the thorny issue of how to break out of a confirmed stereotype. For Moana, she has to try and break away from the traditions of her village to become a sea voyager and also, on a meta-level, she has to break away from being a traditional Disney princess. As Maui says: “If you wear a dress, and have an animal sidekick, you’re a princess.” For Judy Hops in Zootropolis, she has to prove herself a competent police officer in a world that thinks a bunny is too small and easily frightened to enter a police force which routinely deals with predators.

Alas, Smurfs: The Lost Village decided to buck this positive trend and instead gave us a film which on the face of it is about a journey of discovery for the main female protagonist, but turns into a piece that simply reinforces gender stereotyping with uninspiring characters and an ill-thought out plot.

Smurfs: The Lost Village is a reboot of the franchise and distances itself from The Smurfs in 2011 and The Smurfs 2 in 2013. One factor leading to this reboot was that The Smurfs 2 was not a box office success, but is also attributed to the fact that Jonathan Winters (who voiced Papa Smurf) passed away after filming. Anton Yelchin (who voices Clumsy Smurf in the first two films) also passed away in 2016. Virtually none of the original voice cast is brought on board for this third film.

Whereas the first two films were live action mixed with animation, Smurfs: The Lost Village is pure animation. Smurfs 2 had Smurfette as a lynchpin character when she is kidnapped by one of Gargamel’s creations; as the other Smurfs try to rescue her, she must come to terms with who she is. In a similar vein, Smurfette’s quest of self-discovery bookends Smurfs: The Lost Village.

Near the wall separating the Smurf village from the Forbidden Forest, Smurfette encounters a stranger in a mask whose eyes are very similar to her own. When that stranger disappears through the wall, Smurfette and some of her friends (Brainy, Clumsy and Hefty) defy Papa Smurf’s orders and venture into the forest to discover the truth. Since Gargamel has also discovered that Smurf-like creatures live in the Forbidden Forest, Smurfette and the gang face a race against time to warn the other Smurfs of his evil plan of stealing all their magical essence.

Feminism (or the lack of it) within the Smurf world

When they finally discover the lost village, it turns out that it’s inhabited by a group of female Smurfs; and this is where the film really starts to make you cringe. Each male Smurf has a name that reflects their attitude or profession: Clumsy, Baker, Brainy, Nosey. But the female Smurfs are named after plants and flowers: Smurf Willow, Smurf Lily, Smurf Blossom. 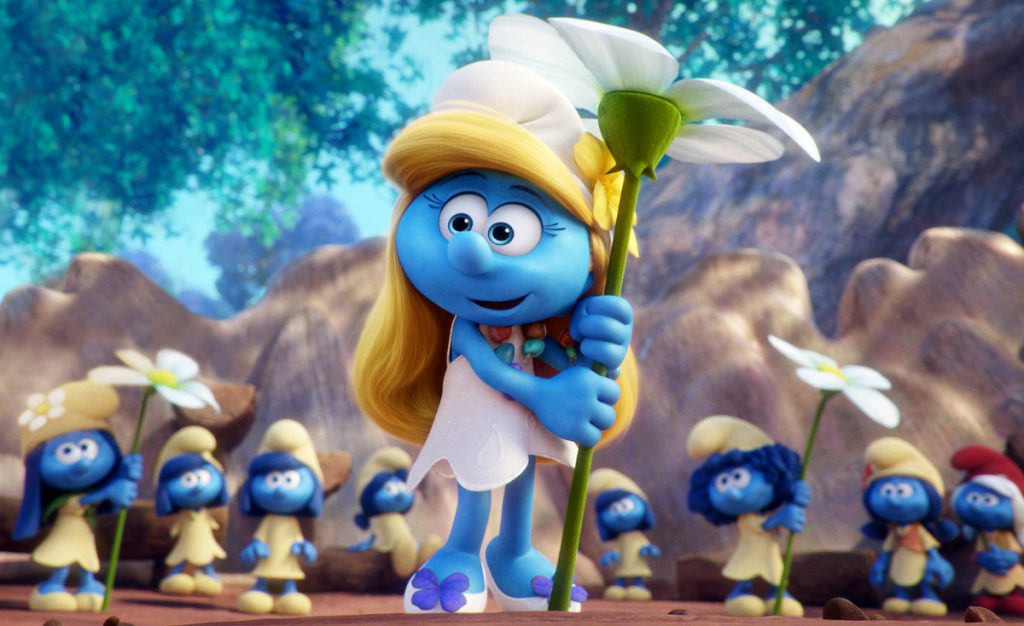 The one exception to this is Smurf Storm, who is arguably the most positive female Smurf there is. She can shoot a bow and arrow, and she insists on going out to check that Gargamel really isn’t about to storm their village. She’s proactive, tactical and skilled. But this is all undermined by her negative portrayal: she’s the only cynical one of the named female Smurfs, the rest of whom are bright and bubbly and friendly. She distrusts Smurfette, whom we all know is the heroine of the piece, so we are encouraged to see Smurf Storm as a character with bad judgment and a worse attitude. As a result, the message that this film puts across is: the majority of girls have to be bubbly, trusting and part of the herd, and if you’re proactive or skilled or in any way a little bit negative, you will find your fellow women looking at you funny and apologising to guests for your behaviour.

Smurf Village, where Papa Smurf and the male Smurfs reside, is filled with industry and individuality. Each Smurf in the opening sequence is seen going about his own business and exercising his own talent. In contrast, Smurf Grove, the home of the female Smurfs, is more like a beauty spa with a few recreational activities. Hefty and Brainy Smurf are given massages and face masks, and while there’s a bit of archery and weightlifting going on as well, this is done in groups with all the female Smurfs acting together rather than with their own individuality.

Whilst there may be a lot of male Smurfs, there certainly aren’t enough to use up all of the adjectives and professions in the world, so why name the female Smurfs after flowers and deny them any valued profession? Why couldn’t we have “Nurse Smurf”, “Chef Smurf”, or “Teacher Smurf”? These are all professions which are favoured by women and which, to my knowledge, haven’t already been used up as names for the male Smurfs. There is just no reason to name them all after flowers and reinforce outdated values. 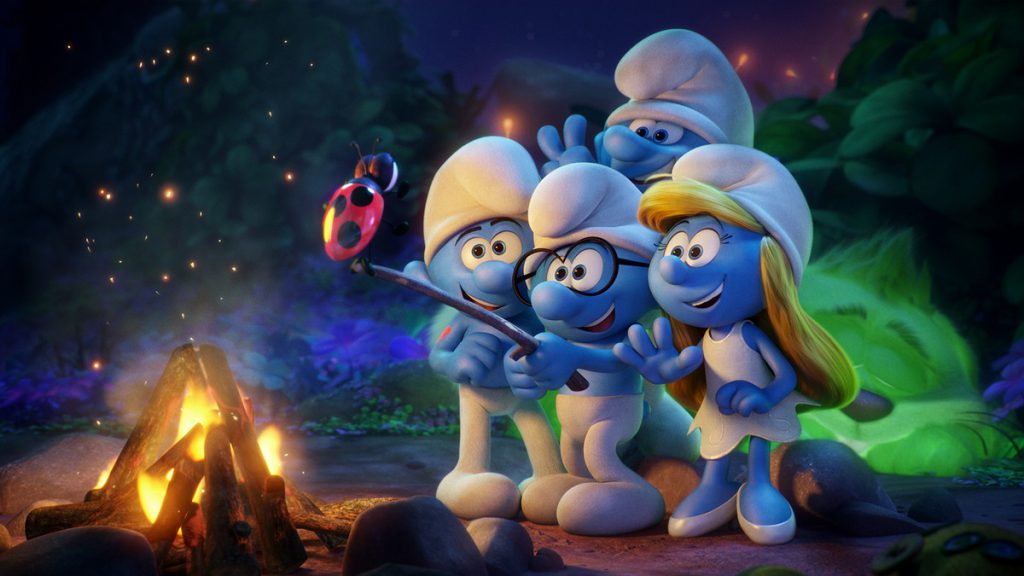 It seems such a shame that this film has taken this direction, particularly given that it was written by two women, one of whom (Pamela Ribon) was not only a writer on Moana, but was also given special thanks in the credit of Zootropolis. How did a woman who was involved in such positive and inspiring movies as these end up penning something so totally steeped in misogyny?

Leaving aside the whole aspect of the representation of women, this film is just a bad movie. It has a predictable plot and the characters move from one set piece to another with no real emotional development. Even though Smurfette goes on a journey to find herself as much as to discover the lost village, she doesn’t seem to come away from it changed at all.

For me, one of the highlights of the first two live action movies was Hank Azaria playing Gargamel. He owned that character, gave life and nuances to a pantomime villain, and his exchanges with his cat, Azrael, were filled with comic timing. The fully animated version just doesn’t reproduce this, making it by far inferior to the first two films.

My only hope for this movie is that any sequel will keep the two communities of Smurfs together and won’t be reset back to being an all-male show, bar one token female. I’m sure there are plenty of jobs and skills female Smurfs can do, and it’s time to show them. Right now, even Florist Smurf would be a step in the right direction.

Previous: Letters from Baghdad: Not very like a woman, you know…
Next: Guardians of the Galaxy Volume 2: Showtime, A-holes!