Home / Film / Detroit: It’s a war zone out there 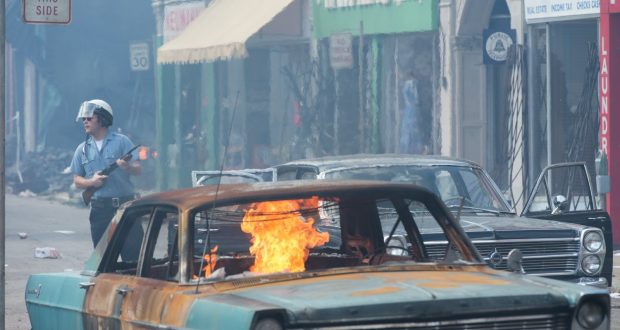 Detroit: It’s a war zone out there

Detroit is Kathryn Bigelow’s return to the big screen with a feature length piece since Zero Dark Thirty. It dramatizes the 1967 Detroit Riots, and more specifically the infamous Algiers Motel Incident, where a taskforce of policemen humiliated and assaulted a group of young black men and two white women, ultimately killing three of them. It’s worth saying that many of the events are historically disputed and this is a dramatization of (in-part) speculated events. The film is riding a crest of political relevance and is certainly a powerful watch but it is not without some issues.

The core of the film, centring on the Algiers incident, is a gruelling and extended sequence. The acclaim Detroit is receiving rests on this. The film speaks to a lot of present tensions about the abuses of law enforcement on black communities in America, the Black Lives Matter movement, etc. Of course, seeking political relevance can be crutch for bad film-making and this is not the case here. Wil Poulter is very convincing as the ringleader of the racists cops who get out of control when interrogating these black kids. Poulter is repulsive because he is believable – he’s not an incomprehensible monster but delusional reactionary who thinks he is doing the right thing. Above all, we see numerous sources of authority waive responsibility for reining him in or holding him to account. He acts this way because it is permissible. John Boyega plays a private security guard swept along with the proceedings – it is a very meaty role given how conflicted the character is about his relationship with other law enforcers as a black man. These are just the standouts though in what is a solid ensemble feature. Bigelow has not let the weighty political themes distract her from directing strong performances.

Were this film restricted to the Algiers incident, I’d be ranking it amongst the best of 2017 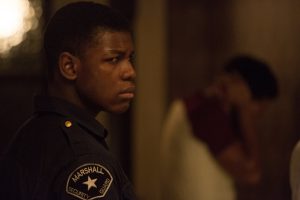 The key problem above all else is running time. This film is LONG. Unnecessarily long. The Algiers sequence is a sizeable chunk of the film but that held my attention throughout. It is the elements before and after that bulk out the running time to an unreasonable length. These scenes are redundant because they contribute sparingly little to the otherwise impressive central element. We get a very interesting graphical representation of the development of the urban black population at the very start and then proceed into a series of scenes showing how the riots built up. At this point, Detroit seems like it will be an ensemble piece, breaking down the riot into a series of vignettes with different perspective characters. It then locks down on a single point of focus for a long time, then splays out into a series of not especially informative scenes that follow through the consequences of the incident.

So much of the material around the Algiers scenes is utterly irrelevant. Whilst I was interested and engaged at the start, it became apparent that characters and developments depicted there would not play into the larger film. Of course, Detroit needs to establish the context for the riots but after a point Bigelow is indulging herself. Worse so for the follow through. We get a very abridged version of the trial following the Algiers Motel Incident which doesn’t really delve into the dense political issues. As a result, it feels like an abortive inclusion which takes up far too much time since it lacks insight. The scenes picking up the surviving characters are the most interminable. 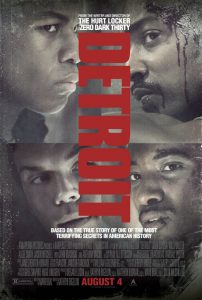 After a certain point, holding a shot or adding another scene serves no purpose because it provides no new information and does not enhance the quality of the material the succeeds or precedes it – it simply keeps going, falsely assuming that by not ending when it should, and reiterating the same information over and over again, some dour import and gravity will be imbued on this utterly superfluous filler, when really it should be cut because it’s just saying the same thing that has been said before and pads out what is already a sizeable beast, which could be seen to test one’s patience. Do you see what I did there?

I don’t want to undersell this. Detroit is angry and righteous and indignant and powerful. The performances are very good, the handling of a harrowing event is deft. Even the nightmarish abusive cops don’t descend into caricature nor does Detroit become so unsophisticated to tar all law enforcers with the same brush. But Bigelow has been undisciplined and produced an admirable but bloated film. You could trim a much sharper and leaner film out of Detroit for a far more satisfying and focussed dissection of race relations in America.

Verdict: Detroit is good but is held back from greatness by its indulgent and unnecessary bulk.

Previous: Logan Lucky: We got a plan
Next: The Dark Tower: Try better next time