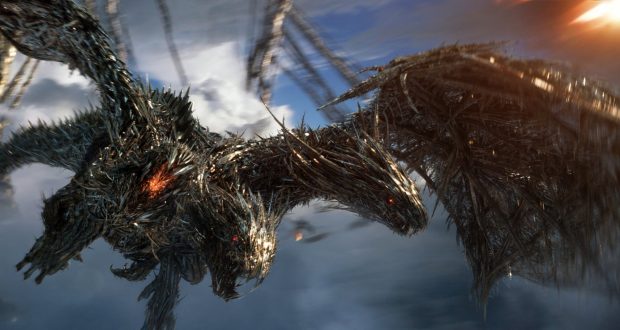 You are actually reading the second version of this review. The first consisted of a stream-of-consciousness which included the phrase ‘fuck you’ 463 times. Of course I hate this film. Someone with the remotest sense of critical taste was bound to. These films wear their reputation for critical savaging with pride. I can say that having not seen a Transformers film for some time, I had forgotten just how bad these monstrosities are. To be clear, I could never expect this to be good, but I think lack of exposure allows one to falsely recall that these are just as bad as any other studio dreck. Oh, how untrue. Oh, how unprepared I was.

Plotless? Of course. Sexist? Naturally. Nauseating to watch? You bet! What marks Michael Bay out is not these factors alone, but in his typical style, the SCALE of them. This film does not have plot holes because that would imply there was a plot to begin with. Transformers: The Last Knight makes no discernible sense in a way that makes other bad films look like Citizen Kane. The sleazy ogling of this outing’s female lead, Laura Haddock, feels like it comes from the 1970s and she is meant to be an Oxford academic (ha!) which allows for added layers of anti-intellectualism. And above all else are the visuals.

My God, it wouldn’t end! Why did it keep going? End, you miserable tumour of a film! END!

Brain-dead apologists for these films constantly squawk that snobbish critics need to get off their high horses and just enjoy these films for the action they deliver. But the action in these bloated messes is dreadful. Michael Bay cannot shoot a conversation without his ADHD-editing style and swirling camera, let alone a scene with so many moving elements. Leave aside that action scenes are boring if you are not invested in the participants; there’s no satisfaction to be gained here. The Transformers are indiscernible heaps of metal with no heft or impact in their environments, the CGI is never well-integrated, and the lack of frame composition makes it even more unreadable. The editing is chaotic, and you don’t just end up losing track of people’s relative position – the film is wantonly inconsistent with location even within scenes.

Everything about this production reeks of a lack of professional film-making or basic common sense. I kid you not, the film randomly switched aspect ratio at times. The production makes a big point of having a lot of action in England but is so unable to focus that the location shooting is often incorrect. In one scene, Laura Haddock’s character leaves her London abode and enters her car; when we then get interior shots in the car, she is clearly on a street surrounded by trees and not Georgian townhouses. The first establishing shot of Anthony Hopkins’ castle is taken from Bamburgh Castle – which is on the coast – and then every subsequent exterior shot was of Alnwick – which is surrounded on all sides by trees and rolling fields. In one scene we have Blenheim Palace serving as a backdrop and in an entirely perfunctory scene later on, we see the same ancestral home of Winston Churchill draped in swastikas to serve as a Nazi base. Oh, and someone needs to tell Michael Bay that Oxford and London are not interchangeable. Despite the fact that the captions do indicate these are different locations, people are able to walk briskly between the Westminster and Trinity College Library.

Colonoscopy footage would have been a more valid cinematic endeavour 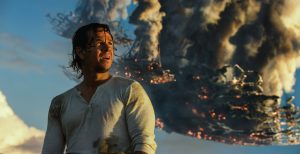 The only thing that differentiates this travesty from a bottom-of-the-bargain-bin straight-to-video hack job is budget. This film cost more to make than the GDP of four countries, and that doesn’t include the advertising budget which was probably just as much again. This film cost as much as a small country and it can’t even summon the basic measures of professional film-making to shoot characters together as they talk in the same location.

It is clear beyond any doubt that no one cared about this smear on human culture. This film is disdainful of every element it includes and every audience member who goes to see it. This cynicism disgusts even me. Transformers 5 hates the property it is based on. Why else are these nerd toys relegated to meaningless ciphers to make room for the big-muscled military men to show off their guns? It hates the pandering fantasy knock-off elements they have bafflingly included to appeal to the GoT crowd. It hates women, minorities, nerds, people with attention spans, intellectuals, and even cinema itself.

I could spend thrice as long cataloguing every bad element. What would be the point? Why spend any longer sifting through this faecal matter to discern how chunky or soft it is at any given point? Transformers: The Last Knight is a cynical hack-job made by terrible people who have no right to be making films. The fact that so much time and money could be spent making something so incontrovertibly awful is a testament to the worst practices of our film-making industry. My only hope, in the absence of the quick release of death, is that we’ll see steadily declining profits for this grotesque juggernaut of a franchise and it will bleed out, humiliated and gored like a stuck pig.

Verdict: If you like this film you are a terrible person and the world is better off without you.

Previous: Virtual, augmented, and simulated realities in science fiction
Next: GLOW: We will be invincible!