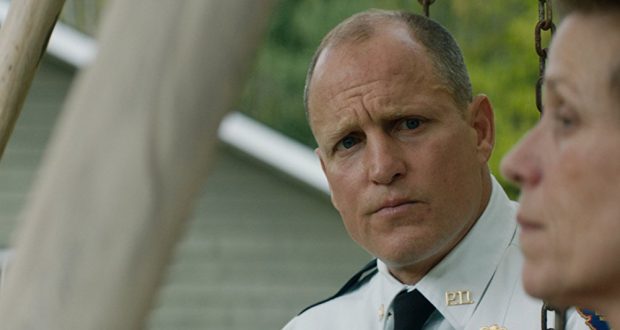 Three Billboards Outside of Ebbing, Missouri

Three Billboards Outside of Ebbing, Missouri is a comedy addressing some bleak subject matter. Writer-director Martin McDonagh has a track record in this regard – he is responsible for dark comedies In Bruges and Seven Psychopaths – but in some respects, this is his most serious work. It is nevertheless still incredibly funny without trivialising its subject matter.

Mildred Hayes (Frances McDormand) is a bereaved mother. Her daughter Angela was raped and murdered, and the culprit never found. Infuriated by the apparent indolence of the police, she hires three inflammatory billboards outside of town calling out the local police chief (Woody Harrelson) on his lack of progress. The police are incensed at the attack and the (white) community largely rallies behind them over Mildred. The belligerent woman though is not going to roll over. 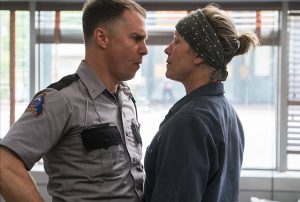 The plot actually spills out in some interesting and atypical ways from there. This does make the Three Billboards a touch meandering. As you move through McDonagh’s films he uses bigger casts, bigger concepts, and generally increases his scope. Having said that, when you realise the film is largely about the conflict in a community and the individuals underpinning its factions, this approach seems much more appropriate. It is not as tight and focussed as In Bruges by any stretch but as much as it centres on Mildred and her feelings of recrimination and guilt, by the end it feels rather more like an ensemble piece.

McDormand in the central role is great. Mildred is fierce, uncompromising, impolite and a mess of virtuous indignation overlaid with poor decision-making. She is what all strong protagonists aspire to be: complex and flawed. Chief Willoughby as played by Harrelson turns out to be less of an antagonist than the trailers or basic premise would suggest. Yes, he has failed to apprehend a culprit but from his perspective he simply could not catch a break on the case. He is trying to do good for his community before he is claimed by cancer and does sympathise with Mildred’s frustration.

Not offering a simple resolution is very wise direction to take 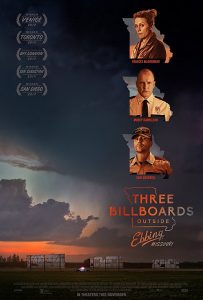 Sam Rockwell’s Officer Dixon, a casually bigoted cop with impulse issues, turns out to be one of the cruxes of the drama. He and Harrelson are becoming go-tos for McDonagh’s films and based on their performances here, you can see why. Dixon’s development from supporting buffoon to a major player in events by the end shows a high degree of craftsmanship in both Rockwell and McDonagh.

I think one of the reasons the film also lands so well is its timeliness. The central issues are an act of appalling violence towards a young woman, communal indifference to it, and structural enforced abuse within the community. Obviously in the wake of the Harvey Weinstein and broader Hollywood sex scandals, this is a hot topic. Of course, if the film didn’t treat these issues with due intelligence or sensitivity then it would be a very badly judged affair. But the director does not use the premise as an excuse to indulge in poorly-conceived sexualised, nor to offer unrealistic reassurances of how justice can be meted out for these crimes. The picture is complex and treated as such. And it’s also raucously funny, honestly.

Verdict: An entertaining and well-judged dark comedy touching on some poignant subject matter.

Previous: Psycho-biddies and hag horror
Next: All the Money in the World